Ryan Ratajewski is like a lot of Packers fans. He makes it to a couple games at Lambeau Field each season. When he can’t watch in person, he stocks up on the essentials at the grocery store in the hours leading up to kickoff. He supports Green Bay by sporting Packers apparel in his day-to-day life. However, there’s one thing that sets Ratajewski apart from fellow fans: he runs an amazing Twitter account that’s completely devoted to Green Bay Packers jackets.

The 39-year-old Franklin resident started @PackersJackets in late 2017. Though the account is relatively young, his earnest affinity for sports-branded coats extends all the way back to his childhood, and he’s recently made up for lost time by thoroughly and extensively documenting primo Packers jackets he spots at tailgate parties, bars, stores, airports, and everywhere in between.

Now that the temperature has dropped and jacket season is officially here, we figured it was the perfect time to ask Ratajewski about how the hyper-specific account came to be, hot spots to find cool coats, and if there are any rare Packers jackets he’s by dying to find in the wild.

Milwaukee Record: What made you decide to start a Twitter account solely about Packers jackets? I don’t think I’ve ever seen anything like this for another team.

Ryan Ratajewski: In 2010, I went to a Packers game at Lambeau and my friend who took me had an old 1990s leather Packers Quarterback Club jacket that had been in the back of his trunk for more than a year. I never owned a Packers jacket, so he gave it to me on the spot and I wore it all day.

A week later, I was driving through West Allis and I swear I saw six different Packers jackets within 10 minutes. I thought, “wow, West Allis is the mecca for Packers jackets,” and that it would be a good viral video to see how many you could find in a day. Then I was noticing more and more everywhere, so I started taking pictures and, later, started a Twitter handle. 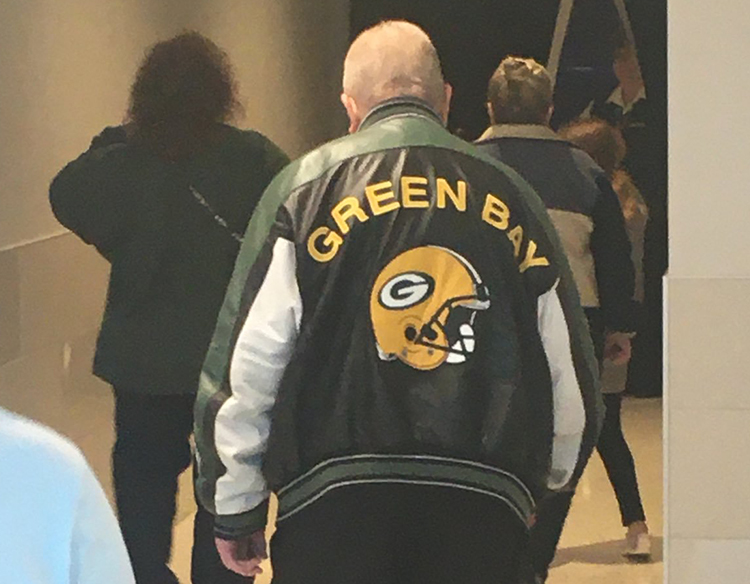 MR: Other than their abundance, what makes Packers jackets so special to you?

RR: I love the Packers pride in this state. It’s so special, and sometimes we take it for granted. Personally, I am not a big jersey guy, but I grew up during the Starter pullover jacket era. I was the first kid in my school to have a Starter pullover—Miami Hurricanes—and got a second a year later for Christmas—Miami Heat. I wished I would have kept those.

MR: How do you think Packers jackets have evolved and changed through the years?

RR: There are so many varieties. I have rarely posted the same jacket twice. I really look for the old jackets that people have had for more than 20 years, but still wear frequently.

MR: What’s your holy grail of Packers jackets? Is there one you’ve been waiting years to see in the wild? Maybe the one with all the times they won the Super Bowl?


RR: The leather jackets, maybe they are pleather, are always at the top of the list. Packers jackets that have all the World Championship years on the sleeves are great. Packers Super Bowls jackets are great because they are either eight years old or they go back to 1996-97. Most people don’t own any clothing more than 20 years old, but they will proudly wear a vintage Packers jacket. I love still seeing the 1997 New Orleans Packers Super Bowl hats, too.

The best jacket ever was similar to a high school letterman’s jacket but the leather sleeves were autographed by Willie Davis, Ray Nitschke, Jerry Kramer, Bart Starr, Jim Taylor, and Paul Hornung. I loved that this guy wore the jacket to games rather than having it sit in a frame or a closet because of the potential value. I watch dozens of people come up to him about the jacket and he loved to talk about it.

MR: How do you go about scouting and photographing jackets for the account?

RR: I go to usually two Packers games a year, so I get a decent library. Now that there are more than 200 Twitter followers, I get several people that take them and tag the Twitter account.

MR: Other than Lambeau Field, are there any hot spots where people are known to wear Packers jackets?

RR: West Allis, South Side corner bars, Manitowoc, and Potawatomi Casino are hot spots. Grocery stores on Sunday mornings is a key time from 9 a.m. to noon. They are usually walking out with hot ham and rolls and a 12-pack of Miller Lite. Mitchell Airport on a Friday before a road game is another prime spot.

MR: When is a jacket deemed worthy of being on your account?

RR: The older the better. I met a guy who only wore his 30-year-old Packets jacket on game days and when he shoveled snow. It seems like many people from Wisconsin have a jacket that they only wear to shovel and snow plow.

It’s simply amazing. Never seen this one before. Not even anything close. #PackersDaily #GoPackGo #costco pic.twitter.com/HbOSB2H2rg

MR: Do you have any tips on where to find great, rare Packers jackets?

RR: You will find at least one Packers jacket in every Wisconsin corner bar. I went to Coach’s Pub ‘N’ Grill in Milwaukee last week for a fish fry and I saw five Packets jackets in less than two hours. All different, all exceptional.

MR: Any hopes or goals for @PackersJackets in the near future and in the long run?

RR: it would be cool to have a current or former Packer rock a leather and tag the Twitter handle, or maybe a celebrity. Other than that, I have no real goals. I’m just having fun with it.

RR: Bart Winkler from WSSP’s Chuck & Winkler Morning Show has been a fan of Packers Jackets since its inception. He’s sent a few pictures in and has retweeted about it a few times. He has more than 10,000 Twitter followers, so when he tweets about it, I generally get 20 to 30 more followers. Also, the Lambeau Field Packers Pro Shop is the true mecca of Packers jackets. I almost cried [when I saw it]. They have everything. You can get these on Craigslist and Facebook marketplace very easily, too. 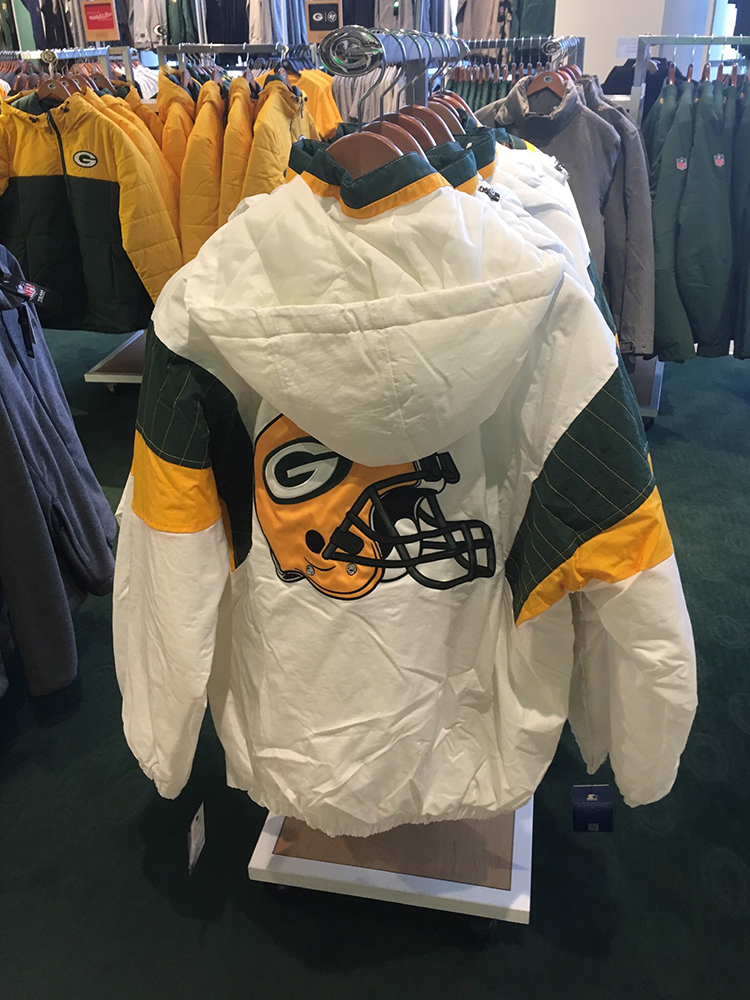