“There are white supremacists in the White House! You have a douchebag for a governor!”

Aaaaand that’s how you start your set if you’re The Decemberists and you’re playing a sold-out Riverside Theater on a Sunday night and the first song you’re playing is called “Everything Is Awful.” Yes, like many fine Americans, The Decemberists are feeling a touch bitter/confused/angry these days. And why not? The last few years have been a horror show at worst, a farce at best. So why not just hang the sense of it and sing along? “Just what you need,” said frontman Colin Meloy during the fuck-it-all mid-song outburst. “A band from Oregon talking shit about your state.” It’s cool, Colin, we’re with you. (The bros sitting next to this reviewer were decidedly not with him.)

Anyway. The story on The Decemberists’ new album—the mostly brilliant, occasionally perplexing I’ll Be Your Girl—is that it’s a Bold Departure. It wouldn’t be the first: Rising to ’00s-indie-boom prominence as a hyper-literate folk band more likely to spin a story-song about a vengeful sea monster than ask Cleveland how it’s doing tonight, The Decemberists first tinkered with their sound on 2011’s The King Is Dead. That album pared down the bookish preciousness of previous albums like 2005’s Picaresque and 2006’s The Crane Wife and recast the band as an R.E.M.- and Fleetwood Mac-inspired Americana outfit. Now, I’ll Be Your Girl is being marketed as the group’s ’80s synth album. “This is the ‘new look’ Decemberists,” Meloy joked near the end of the night. “Jenny has a synthesizer!” 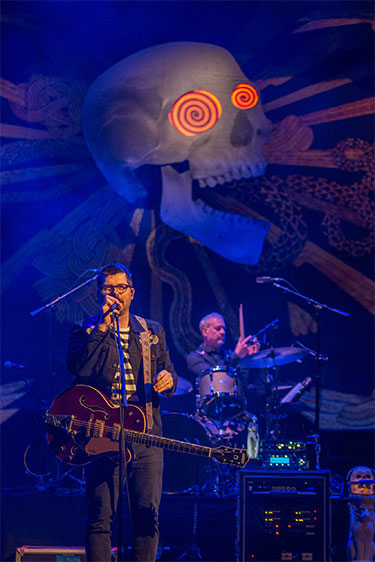 Jenny did indeed have a synthesizer (that would be multi-instrumentalist Jenny Conlee), but did it really translate to a “new look” in a live setting? Yes and no. I’ll Be Your Girl was heavily represented at Sunday’s show, with all but one track (“Tripping Along”) making the cut. Yes, many of those songs rocked the synthesizer—most notably lead single “Severed”—but by and large the instrument blended in nicely with The Decemberists’ usual bag of musical tricks. The nautical hangups of yore and the pop leanings of The King Is Dead and 2015’s What A Terrible World, What A Beautiful World were still there, now just with a dash of Pretty In Pink synth. (Need proof? Look no further than the epic “Rusalka, Rusalka / Wild Rushes,” which kicked off Sunday’s first encore.) Live and on record, I’ll Be Your Girl is less a Bold Departure than a welcomed tweak to a constantly tweaked formula.

Still, your mileage may vary on new tracks “Everything Is Awful” and “We All Die Young.” In a review for Pitchfork, Evan Rytlewski calls the former “basically a novelty romp—Meloy’s answer, perhaps, to that manic theme from The Lego Movie,” and characterizes the latter as “a dopey Jock Jams beat to a Kidz Bop cheer-along.” He’s not wrong: “We All Die Young,” especially, seemed too on-the-nose and forced Sunday night; watching Meloy and company teach the crowd when and what to cheer along was awkward. Better was I’ll Be Your Girl‘s leadoff track “Once In My Life,” which internalizes the free-floating anxiety of modern times and turns it into a washed-out “woe is me” lament perfect for the Big Moment in an ’80s teem dramedy. Live, it was gorgeous.

Not that it was all new stuff: Spirited run-throughs of fan favorites like “Down By The Water” and “O Valencia!” made appearances, as did a show-stopping performance of “Bagman’s Gambit.” Meloy joked early on that the assembled revelers may not hear their favorite songs, and that they would have to settle for their “third or fourth favorites.” The crowd—a bit reserved at first, but positively giddy sometime around a mid-set shout-out to Giannis Antetokounmpo—didn’t seem to mind. Also: Good grief, The Decemberists sound absolutely incredible live, don’t they? (Hat tip to backup singers Kelly Hogan and Nora O’Connor.)

One small thing that was hard to miss: a touch of weariness to the band, especially Meloy. Maybe it was the usual ravages of the road, or maybe it was the ravages of having to start your show night after night with a song about how everything sucks, but The Decemberists seemed a bit down in the early numbers. Either way, Meloy, ever-friendly and sipping wine throughout the evening (never change, Decemberists!), was plenty perked-up in time for the second encore, in which he patiently instructed the crowd how to scream as if they were being swallowed by a whale during “The Mariner’s Revenge Song.”

Something else to ponder: The Decemberists have been at it for nearly 20 years. (Doc Brown: “My god, has it been that long?”) Shit, on certain days, 2005 may as well be 2,005 years ago. Could it be that the band is finally feeling the pangs of becoming a—gulp—”legacy” act? Maybe, but along with that sometimes dubious distinction comes a sense of history, a sense of definition. Even casual Decemberists fans at Sunday’s show likely heard a song or two they once loved, a song they perhaps forgot about, a song that instantly took them back to a time and a place and an apartment and a group of friends that no longer exist. That transportation may be bittersweet, but it certainly isn’t awful.

“Thank you!” Meloy exclaimed throughout the evening, free of weariness and modern-day burden. The feeling was mutual. 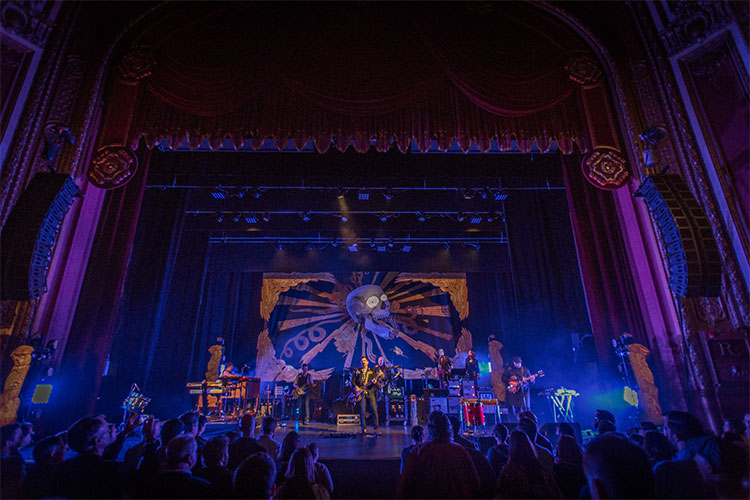 Everything Is Awful
Your Ghost
Sucker’s Prayer
Make You Better
Cutting Stone
Lake Song
Bagman’s Gambit
Yankee Bayonet (I Will Be Home Then)
From My Own True Love (Lost At Sea)
Rox In The Box
Starwatcher
Down By The Water
Severed
We All Die Young
O Valencia!
Once In My Life