In late 2001, Ron Johnson made me a mix CD of acoustic music.

Allow me to explain.

At the time, I was a Radio-TV-Film major at UW-Oshkosh. I had recently become obsessed with traditional folk music, and I hosted a folk show on our college station, 90.3 WRST (“Real Radio!”). Somewhere somebody told me about an online listing of local folk resources, newsletters, festivals and whatnot called the Folk Lib index. In fact, here’s that very website, the design of which is nearly unchanged since the mid-2000s: 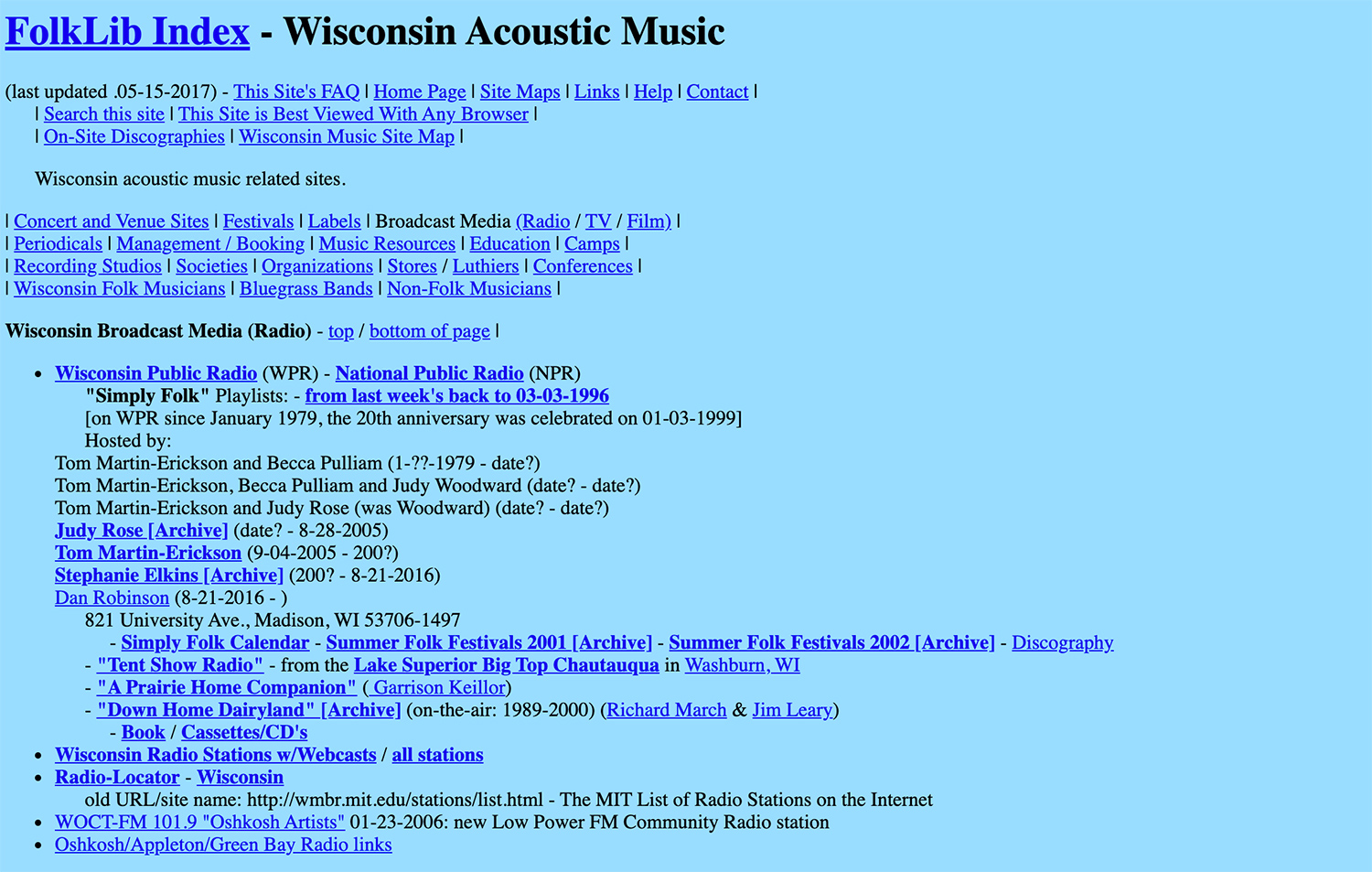 While scrolling through the listings of local folk gatherings, I came across a group calling itself The Oshkosh Friends of Folk Music. I had no idea what this group was, but it listed someone named Ron Johnson as the contact person. I sent an email explaining that I was a student who ran a folk show on the local college radio station, and that I might be interested in working together with the Oshkosh Friends of Folk Music if the stars aligned.

Ron called me back pretty quickly. He seemed rather curious, if not suspicious.

“So, what kind of music do you play on your show?” he asked.

I explained that the show focused on a lot of traditional folk and blues recordings from the 1920s and 1930s.

At first, silence. Then Ron declared, “Well, I happen to think that a lot of that old folk music is horseshit.”

Ron let that statement linger in the dead air before proclaiming, “Now let me tell you what we’re about.”

Ron explained that the Oshkosh Friends of Folk Music was his brainchild, with the goal of bringing more quality and world-class folk music to perform at Oshkosh’s Grand Opera House. I quickly learned that Ron’s idea of folk music was more of the acoustic singer-songwriter variety akin to James Taylor. Apparently, the Oshkosh Friends of Folk Music had already pulled off a serious coup by getting singer-songwriter Patty Larkin to come play a show a few months prior.

Ron then asked me, “You ever heard of John Gorka?”

I hadn’t. But Ron’s Oshkosh Friends group had just booked a John Gorka performance at the Grand. Ron had some comp tickets available that we could give away on the air, and he offered to make me a CD if I’d put it into rotation on WRST. I was 20 years old and excited to partake in my first experience in event promotion, even if this particular style of folk music wasn’t exactly my cup of tea. I agreed to promote the show and Ron promised to have something in the mail for me very soon.

Not long after that phone call, my WRST mailbox had a package from some company named PACUR. Inside were the promised giveaway tickets, along with a CD-R that Ron had made me of his favorite John Gorka songs. Ron had even taken the time to write the track listing on the CD: 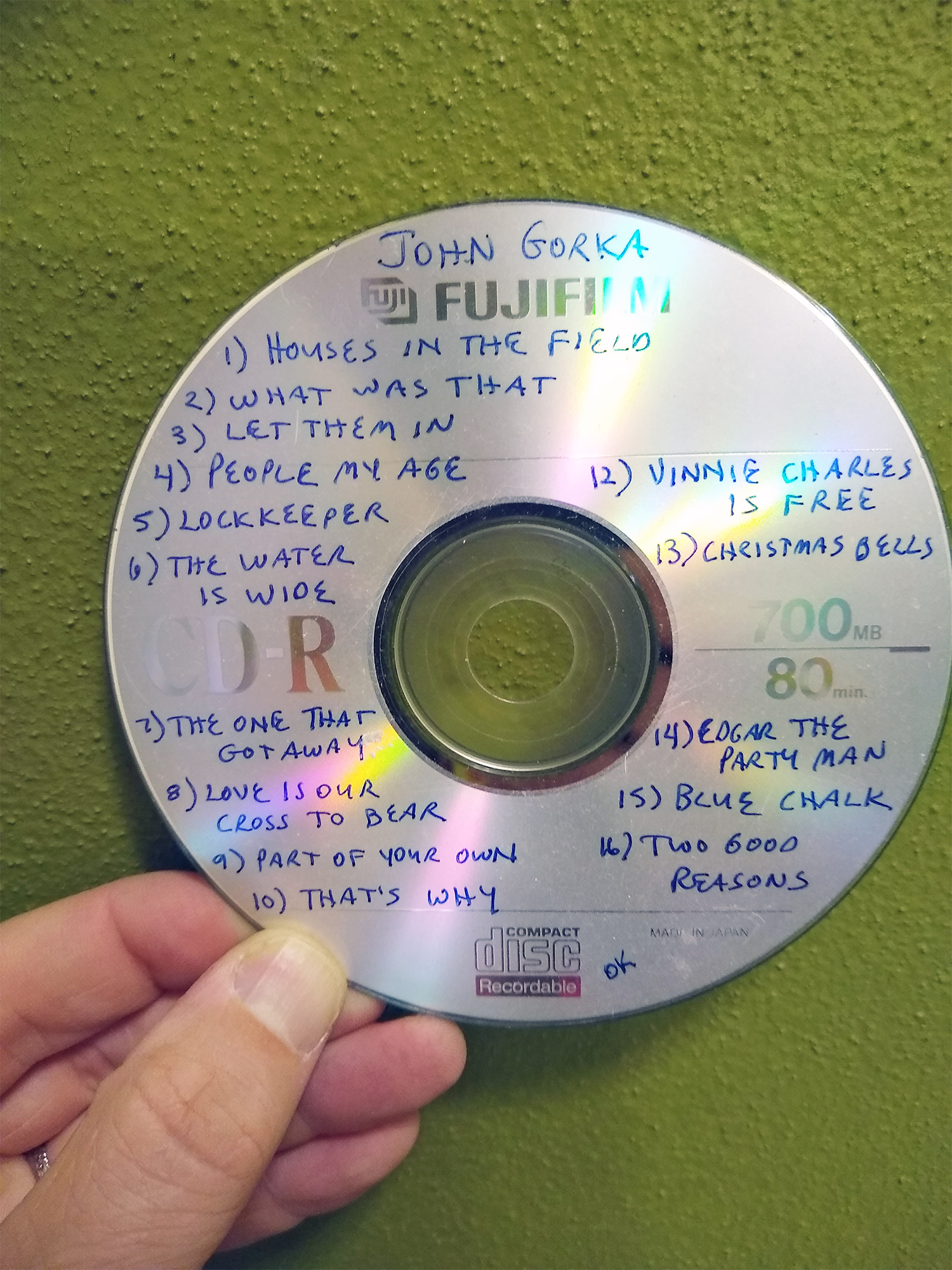 Also included was a personal letter from Ron, complete with a song recommendation. “My personal favorite is…’Let Them In,'” he wrote. “It is a poem sent to John by a fan that found it in [a] book left by her father after his death. Her father had served in the Pacific, and wrote the poem from his hospital bed following the Battle of Guadalcanal.” Ron had also attached a manifesto of sorts detailing the goals of the Friends of Folk Music. (Sadly, I can’t find the copy of that manifesto.) 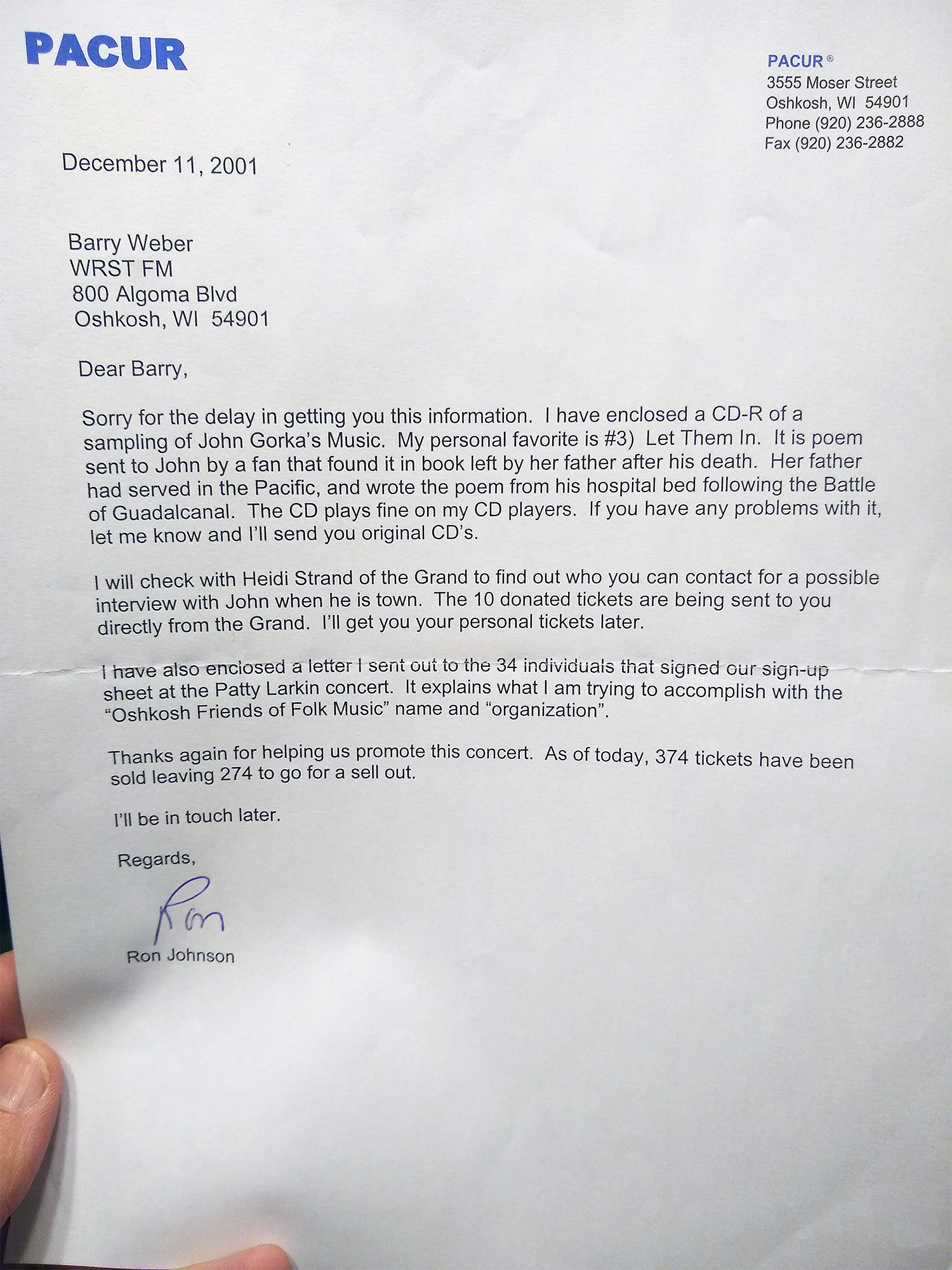 True to my word, I put the CD-R in WRST’s “Breakthrough” section, which was reserved for music that we deemed worthy of heavy rotation. Though I think I played a song or two, I’m not sure anyone else at the station played it. I mean, this was college radio in the early 2000s, and none of us were exactly eager to play singer-songwriters not named Ani Difranco.

Ron contacted me later on to say that he had two free tickets waiting for me if I wanted to come see the show. Nothing against John Gorka, but it really wasn’t my bag. But again, this would make a great coup de grace to my first-ever foray into event marketing and promotion, so why not? I took along a friend and headed to the Grand.

The show was fine.

OK, I admit it, I had a good time. Gorka was funny, professional, and played pretty much every song from my mix CD. My favorite moment of the night was just after intermission, when Gorka shared the stage with the winner of a local teen poetry contest. The student poet recited her winning poem while Gorka provided musical accompaniment. Her poem referenced 9/11—then only a few months behind us—and called for all of us to put ourselves in other people’s shoes and try to work together to solve the problems of the world. At a time when the national zeitgeist was “Either you’re with us or you’re with the terrorists,” I thought it was pretty cool that Gorka used his platform to let a young person speak her mind.

After the show, Gorka did a meet and greet in the lobby. I figured, what the hell, this guy makes a living at what I hope to do someday, so I asked him the big nauseating question that I asked every performer I met back then:

What advice would you give to someone who wants to become a full-time musician?

Gorka’s answer: “Learn who influenced your favorite artists, then go check out their work and find out who influenced them. And then keep going from there and you’ll learn more about what you want to do and what inspires you.”

Before I left, there was one last person to thank for the experience, and that was of course Mr. Ron Johnson. Ron was still in the lobby hobnobbing. He smiled, shook my hand, and began talking about how we could collaborate in the future.

“There’s another guy we want to get here,” he said. “Ever heard of Peter Mayer?”

Again, I hadn’t. Ron promised to send me a new CD-R. He thanked me again for all my help, saying something like, “This has been great.” He seemed really proud of the event and his hand in putting it all together.

In the spring of 2002, another CD-R arrived in the mail—this time, Ron had made me a homemade mix of Peter Mayer songs. Though I can no longer find this letter or the CD, I remember Ron writing that his favorite track was Mayer’s song “Holy Now.”

I put the CD-R into WRST’s rotation but didn’t actively promote it. I knew it would be an even tougher sell for the WRST crowd, and by that point I had fallen in with the UWO theatre program and pretty much switched majors shortly after. I didn’t hear from Ron again, and by spring 2003 I had graduated and left town. But the Oshkosh Friends of Folk Music kept going strong, bringing in several other acts to the Grand.

One month after the Peter Mayer concert, Ron and the Oshkosh Friends did a significant detour from the smooth, polished comforts of Gorka and Mayer by hosting Loudon Wainwright III. Wainwright is perhaps best known for his novelty “Skunk Song,” and he has an unpredictable and even unclassifiable repertoire that can be anything from crude to hilarious to vulnerable to unsettling. Which Wainwright songs, I wonder, did Ron like the most? The joyful triumph of “The Swimming Song?” The sad, cringe-inducing creepiness of “Motel Blues?” The dark humor of “The Man Who Couldn’t Cry?” Or maybe the rowdy madness of “The Acid Song?” Whatever the case, it must have been a wild night at the Grand.

The Oshkosh Friends’ next event after Wainwright brought things back to a more relaxed, low-key vibe with singer-songwriter David Wilcox. No doubt that Ron was moved by Wilcox’s saccharine ballad “Language Of The Heart,” and perhaps he even sang along to Wilcox’s “Born To Run”-esque escape anthem “Eye Of The Hurricane.” (In fact, Wilcox is the only performer that Ron & Friends booked twice—he returned again the following year.) But if anyone suspected that booking Wilcox meant that the Oshkosh Friends of Folk Music were going to keep on the gentle and feel-good acoustic route, the Friends’ next two bookings brought more surprises.

Ron’s group hosted Cheryl Wheeler in May of 2003. Wheeler had recently made waves with her 1997 anti-gun sung “If It Were Up To Me,” later sampled (and butchered) by Garth Brooks’ alter-ego Chris Gaines.

And for the Oshkosh Friends’ final act (at least according to the Folk Lib page), the Friends brought in the brilliant Todd Snider, perhaps best known for “Talkin’ Seattle Grunge Rock Blues,” a satire on ’90s grunge culture. I can only imagine how Ron reacted to Snider’s song “Conservative, Christian, Right-Wing Republican, Straight, White, American Males.”

This brings me to the question I continue to have all these years later, after Ron Johnson became our senator by (twice) defeating one Russ Feingold, a progressive hero whom I credit for inspiring me to get involved in politics:

What did Ron Johnson hate so much about traditional folk music that led him to call it “horseshit?”

Oh wait, no. That’s my follow-up question. My main question is:

How is it that Ron Johnson—a right-wing, conspiracy theorizing U.S. Senator from Wisconsin—once loved and even promoted so many left-leaning folksingers?

One glance at John Gorka’s Twitter feed and it’s quite clear that he’s the kind of person that 2021 Senator Johnson loves to troll. In fact, pretty much all of these performers are rather outspoken in their left-leaning political views. (Though Peter Mayer is the most politically ambiguous one of the bunch, I do find it interesting that Ron’s favorite Mayer song is the rather Zen-themed “Holy Now.”)

At first, I’m tempted to think that Ron simply liked the performers’ music but didn’t pay too much attention to their lyrics, not unlike how so many Americans enjoy “Born In The USA.” But Ron’s note to me about Gorka’s song “Let Them In” suggests otherwise. Perhaps Ron appreciated these artists’ work enough to overlook their politics, the same way I do when I blast a Charlie Daniels song.

Or maybe early 2000s Ron Johnson was a different person than 2021 Ron Johnson…or even 2010 Ron Johnson, back in the good old days when he was making news for such innocent statements as blaming global warming on sunspots, or suggesting that we didn’t need the Affordable Care Act because Walgreens had walk-in clinics. I don’t doubt that Ron probably always saw himself as a conservative. But I do wonder about the forces that changed him—and all of us—to the point where these Oshkosh concerts seem so inconceivable today.

In 2001, I took Ron Johnson as a gruff but nice guy who seemed genuinely happy doing his part to bring national acoustic acts to his hometown. Could he have ever imagined that in just 20 years’ time he would not only be a U.S. Senator, but one whose legacy is now defined by his spreading of vaccine conspiracy theories and enabling the terrorists who attacked our Capitol? Could I have imagined this? Could any of the folksingers who sang for him?

I wonder what kind of music he listens to now.

• Cards Against Humanity is sending a bunch of potatoes to Sen. Ron Johnson