Joseph Huber is a solitary craftsman.

The Milwaukee musician and woodworker works alone, unburdened by time or a clouded vision. Whether he’s constructing a song or a piece of furniture, Huber dismantles recovered fragments of the past and meticulously assembles them into modern treasures. His work is rustic yet comfortable, powerful yet modest. His style is distinct.

Huber’s latest album is a testament to his self-sufficiency. The dynamic multi-instrumentalist played every note on The Hanging Road, including vocals, guitar, banjo, piano, drums, fiddle, and bass. He recorded and mixed the songs in a makeshift studio in his own home over four months, painstakingly melding his country, bluegrass, and folk influences into a ruggedly vibrant record.

“I’d just wake up every day—well not every day, but when I felt like it—and lay down a track at a time,” Huber says. “Usually, I’d go for about four hours at a time and then be like, ‘I’ve gotta get up from this damn computer right now.’”

The self-taught producer—who admits he’s not as polished as he’d like to be on the fiddle or mandolin—didn’t settle on any track until it sounded exactly right. It’s a luxury he doesn’t take for granted. “I just feel most comfortable doing things whenever I feel like doing them,” Huber says. “Tracking things on my time, taking my time with it, checking over things, testing things out and not feeling like I’m burdening anyone else when I’m just noodling around and experimenting.”

In fact, Huber didn’t let friends or family hear a single track from The Hanging Road until it was ready to be pressed. “I usually don’t like showing people the finished product until it’s practically done and out,” Huber says. “There could be a song I end up changing at the last second or adding to the album, and I just want people to hear it as I want to release it. If you have too many friends who have heard little songs here and there, they already have an idea in their head of how it should sound. I’d rather save it and release it all at once.”

Although The Hanging Road came out on April 29, Huber will formally release the album in Milwaukee on Thursday, July 10. “The CDs came two days after my last Milwaukee show,” Huber explains. “I got them in the mail two days later, so this will actually be my officially official Milwaukee release, even though it’ll be two and a half months late.”

Milwaukee streetgrass
Huber is picking up steam as a solo artist, but he cut his teeth as a founding member of the deeply influential .357 String Band. The Milwaukee “streetgrass” band helped pioneer the now-burgeoning underground roots music scene from 2004 to 2011. Huber’s lighting-fast banjo picking was the driving force behind the group’s inventive blend of punk, bluegrass, and country.

But by the end of .357 String Band’s seven-year run, Huber was ready for a change. A statement released by the band when they broke up in 2011 indicated Huber felt “the aesthetic of The .357 String Band no longer represents him.”

So, Huber took up woodworking and started performing as a one-man band. Several of the other members also moved on to successful solo projects, including Derek Dunn, The Billy Cook Band, and Jayke Orvis And The Broken Band.

Huber remains friends with the former .357 String Band members and is proud of what they accomplished, but one thing he doesn’t miss is the band’s marathon recording sessions.

“.357 always did it like, ‘Hey, we’re going into the studio for nine days, and we have to record these 13 songs in nine days, and that’s it,’” Huber says. “I didn’t enjoy working under those parameters. Everything feels rushed, even if you have nine days.”

The Hanging Road
The Hanging Road is Huber’s third solo release, following 2010’s Bury Me Where I Fall and 2012’s Tongues Of Fire. The concept for the title track came from some reading material Huber’s dad forwarded the songwriter.

“My dad actually thought that would sound like a cool name for a song,” Huber says. “It’s an old Southwestern Native American term for the Milky Way. Essentially, for this certain tribe, that’s where your souls go when you die. You go up the Hanging Road. It’s in this book that my dad has. I tried to Google it to find it anywhere else, and I couldn’t really find any reference to it.”

Like most of the songs on the nine-track album, the lyrics for “The Hanging Road” are hopeful, incisive, and deeply introspective. “I chose the songs that meant the most to me or were somewhat recent or autobiographical,” Huber says. “They’re all fairly autobiographical, except for the one about not drinking.”

That song, “Two-Tongued Swear,” was written as encouragement for friends who had recently given up alcohol. “I have all of these friends who are making that transition,” Huber says. “It’s for their own betterment because they know themselves and have had troubles, so I just thought, ‘Well, hell, I’ll write it in first person so they can sing it.’ Or maybe it’s just because I don’t know how to write a song that’s not in first person.”

Another standout track on the album, “Same River Twice,” harkens back to Huber’s time as a philosophy student at the University of Wisconsin-Milwaukee. The title comes from ancient Greek philosopher Heraclitus, who said, “No man ever steps in the same river twice.” “That’s essentially saying all things are in flux and everything changes,” Huber says.

“Same River Twice” details Huber’s reunion with an ex-girlfriend after a seven-month hiatus. “I had this thought in my head about, ‘Can relationships work a second time? Am I just jumping in the same river twice? Would the same thing happen that happened the first time?’ But you really are different people now. You think you’re jumping back in, but essentially you both have moved on.”

And the story has a happy ending: the couple is now happily married.

Sharing the stage
Despite Huber’s fondness for independence, he is ceding some duties with his latest release. After self-releasing his first two albums, Huber signed with Tennessee’s Muddy Roots Records for The Hanging Road.

“It’s the first album that I’ve done this with a record label and a promotional team behind me to try to help spread the word and get it on various radio stations,” Huber says. “It’s kind of like one of those years where you just decide you’re going to jump out of your box a little bit and see what happens. So far, it’s just been positive.”

Huber has also been performing with other musicians at many of his shows. “Now that I went on this last tour with a fiddle and an upright bass with me, I really enjoy doing that,” he says. “I just feel comfortable with a live sound where it’s reaching the sound that I’m going for on the album. I’m obsessed with fiddle, so when I can play live and have the fiddle there, I feel like a lot of the show revolves around that. I love playing with bass and fiddle. Those are the primaries that I wish would always be there.”

As for percussion, he’ll probably stick with his current arrangement. Huber, who sits on top of a vintage suitcase when he performs, keeps the beat against the suitcase with a kick drum pedal and accompanies it with a tambourine hanging from his right foot. It’s a solution he borrowed from street performers and Morgan O’Kane, a bluegrass musician from Virginia.

“I don’t want to be known for it really,” Huber says. “I’d rather be known as a songwriter, so I worry sometimes that that’s a shticky thing. But it works and it’s self-sufficient. It’s not as overwhelming as if I was playing acoustic and was using a kick drum. It’s just kind of a good, soft, in-between bass drum sound. The volume kind of blends down to what I’m doing.”

Huber’s mother discovered his current suitcase model at a thrift store. “She was like, ‘I bet this would sound really good for you. So my dad’s writing my songs and my mom got my kick drum. It’s a family affair.” 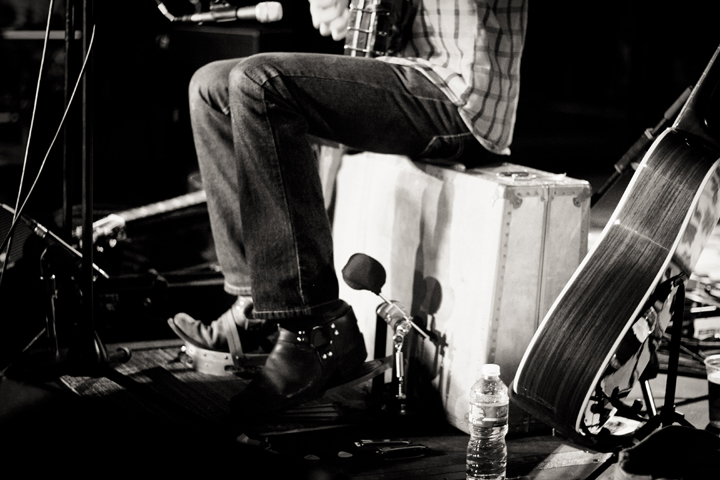 Hello, Milwaukee
After growing up in New London, Wisconsin, Huber moved to Milwaukee for college. Over the last decade, he’s become attached to the Cream City.

He could do without the winters, though. “I think a lot of my personality and my good mood revolve around weather, so in winter, I’m just a frickin’ curmudgeon,” Huber says. “So, why I’m living in Milwaukee in terms of weather, I don’t know.”

Catch Huber in a good summer mood at Linneman’s Riverwest Inn Thursday, July 10. Carrie Nation & The Speakeasy, The Calamity Cubes, and Billy Cook open. The show begins at 9 p.m. and the cover charge is $7.