Very few touring artists have a career breadth as expansive as John Prine‘s. The 71-year-old crooner has been cranking out songs, EPs, and albums since the early ’70s after being “discovered” by fellow folk legend Kris Kristofferson. In February, Prine released The Tree Of Forgiveness, his first album of entirely new songs in 13 years. Though a break that long may prove inefficient for some artists, it reminded listeners that Prine isn’t even a little rusty. His performance at Riverside Theater Wednesday night highlighted his many talents.

Before Prine took center stage, folk duo The Milk Carton Kids shared the spotlight. Their minimalist arrangement—two guitars, two voices—was calming and endearing, not unlike the various folk troubadours who achieved fame during Prine’s own era. They joked with the audience in between songs, setting a cheery tone for the evening.

Prine emerged onstage with a four-person backing band and greeted the crowd with “Be My Friend Tonight.” The inviting performance immediately enchanted the audience and set the precedent for the rest of the set. Prine kept the crowd lingering on his every word. He played the recently released “Caravan Of Fools” early in his set. Ever political, he remarked that the track is about impending doom and “has more verses than members of the cabinet.”

As the set progressed, band members continually switched instruments. This was only appropriate, of course; Prine has dabbled in folk rock, rockabilly, country, and everything in between, and his genre transcendence requires quite a bit of flexibility. Even though he can easily shine with only an acoustic guitar and his weathered voice, his lively support system created a lush soundscape that filled every nook and cranny of the Riverside.

Prine has 26 albums under his belt, and a discography that vast naturally leads to a collection of cherished classics. Though he slipped in a few of his tried-and-true tracks, the bulk of his setlist featured songs off his most recent release. While some older artists can occasionally bore audiences with their newer material, Prine didn’t miss a single beat. The set was virtually seamless, and it’s safe to assume tracks off of Forgiveness will provide good company for his classic material.

One of the most enchanting performances of the night was “Boundless Love,” a song dedicated to Prine’s longtime wife, Fiona. Prine sang and strummed with a tenderness and sweetness that is often mirrored but rarely duplicated. Before diving into the performance, he explained how his wife told him he needed a new record and joked about how she locked him in a hotel room, forcing him to work.

Prine’s slick sense of humor is frequently noticeable in his lyrics, and that comedic sensibility made an easy transition to his onstage presence. He told goofy stories about his recording process and songwriting inspirations, and the twinkle in his eye was noticeable even to audience members in the last row. He had the crowd giggling and cheering throughout the night, and it’s clear his undeniable charm has only increased with age.

Near the tail-end of the set, the band left the stage and gave Prine the opportunity to strum solo. The all-too-brief unplugged stint showed Prine in his prime: an effortlessly talented songwriter with nothing but his voice and an acoustic guitar. He joked about how his voice is “sometimes like a radio; it goes in and out.”

The lively audience participated in a sing-along during “Egg & Daughter Nite, Lincoln Nebraska, 1967 (Crazy Bone).” Like so many others in the set, the song was off of Forgiveness. The avid sing-along proved that Prine’s talents are timeless, and he continues to dazzle fans even when they aren’t in his midst. The Milk Carton Kids joined Prine onstage for two songs, creating a charming blend of folk music past and folk music present.

John Prine is a national treasure, and his Riverside show was a much-needed reminder of his timeless talent. He may not always receive the same reverence as his contemporaries, but that’s not necessarily a bad thing for audiences; he will always be our little, unkept secret. 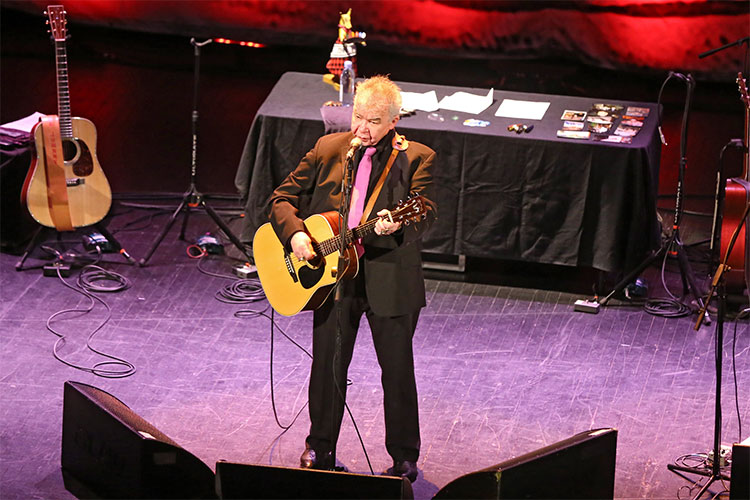