Jason Isbell is a man torn between times. A man caught between Southern roots and worldly ideals. Full-throttle, hard-soaked rebel days and solitary ones spent quieted, comforted, and content with family. Between stomping down the dusty, sun-baked, greased-stained streets he knows by heart and the runways that guide him over the globe.

During a nearly two-hour set at Milwaukee’s Riverside Theater Wednesday night, Isbell, joined by his band the 400 Unit, effortlessly waltzed between raucous stomps and lilting choruses, cracked whispers and roaring howls. He managed to lift the packed theater to its feet in an instant before coaxing it to quiet in a heart stop. He did so with messages of frustration, faith, heartlessness, and hope.

Isbell opened the show with the penultimate track from his 2017 Grammy-nominated album The Nashville Sound, “Hope And The High Road.” It’s a knee-slapper of tune that finds the singer-songwriter downtrodden and defiant in response to a society—and a government—he’s grown weary of. He ended the night on a gorgeous, gut-wrenching closer of an encore, “If We Were Vampires,” a ballad from the same album that equally speaks to finding a perfect love and lamenting the fleeting years together once that love has been requited.

Everything in between? Isbell blended a mix of adoration, anger, and adept storytelling. In a sense, he took the stage to warble and rage the tales of everyday Americans—whether their stories are those of anguish, helplessness, and triumph in places they rarely look—from the leaders who’ve let them down to redemption in the looks of children.

The typically chatty musician was fairly quiet this night, saving on-stage banter to introduce his bandmates by name and instrument—plus to wish bassist Jimbo Hart a happy birthday—but little else. It all meant plenty of time to pack in hits from Isbell singles to Drive-By Truckers covers to 400 Unit favorites from years past. The exuberant “Codeine” kept the crowd clapping along, while “Decoration Day” made diehards stand tall. “Stockholm” lulled the crowd to sway along.

And yet, as much as Isbell lets loose with his four-piece band in a churned-out, rollocking set that allows him to just step up and, well, guitar-solo the hell out of a song, he’s most affecting when quiet, poetic, and simply plucking at a guitar, singing the story he relates to so many so painfully well. Good lord, can the man play a lick out of a tune, but this night, the Riverside never felt quieter and at attention than when Isbell interrupted the uptempo show with heart-wrecker “Elephant,” from 2015’s Southeastern. One of the best examples of songwriting in Isbell’s catalog, the song had the audience hanging on to each crushed word. Similarly, the stunning love song “Cover Me Up” was moving as ever, with a sweetness and sentiment painting a story of true love saved—but we couldn’t help miss the absence of Isbell’s wife, fiddler Amanda Shires, who has previously lent her lovely voice to the tune in tours past. (She’s off in Nashville recording her own album at the moment, so here’s to looking toward new music in her own right.)

Balanced between soft and strong, proud and protesting, blues-drenched and balladeering, Isbell danced his way through a poignant, poised set at Riverside Theater, keeping each sneakered foot planted firmly on one side roots and the other side rock. And the crowd clamored for everything in between. 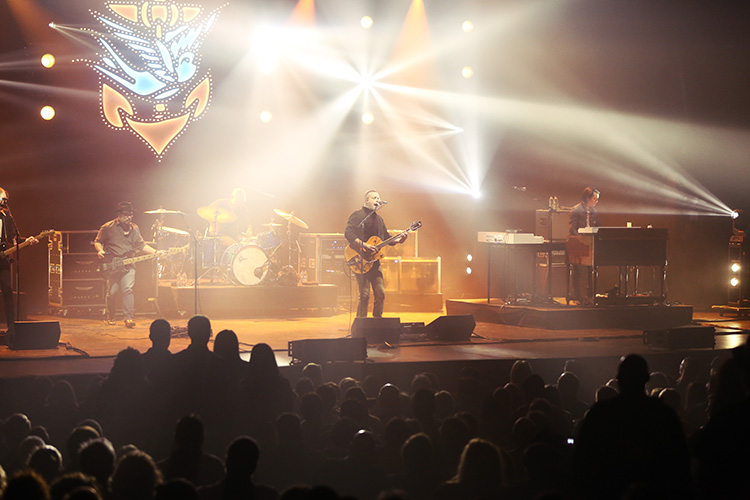