It’s been a while since you’ve heard Staind, probably. Formed way back in 1995 in Springfield, Massachusetts, the band’s two-decade run has seen the nu metal act rise from relative obscurity to widened notoriety via an emotive acoustic catalog outlier the band’s singer performed during the 1999 Family Values Tour. That song (“Outside”), three other sturdy singles—downtrodden ballad “It’s Been A While” chief among them—and a batch of other dropped-D salvos on 2001 breakout record Break The Cycle thrust Staind to mainstream consciousness. That album, which moved an incredible eight million units worldwide and was certified five-times platinum in America, in effect chiseled the Bic-shaved head and inexpressive face of Staind frontman Aaron Lewis onto the Mount Rushmore of nu metal, beside the crumbling, defaced busts of Limp Bizkit’s Fred Durst, Korn bandleader Jonathan Davis, and that dude in Slipknot with the Leatherface mask.

The commercial success of Break The Cycle, which celebrated its 14th birthday two weeks ago, was never even close to matched commercially nor artistically by any of Staind’s subsequent releases, though 2005’s Chapter V enjoyed a blip of attention thanks to the record’s sole single, “Right Here.” Years passed. “It’s Been A While” went from hourly radio requirement to Comedy Bang! Bang! podcast punchline. Not long after original drummer Jon Wysocki departed in 2012, Staind made the all-too-familiar decision to go on an “indefinite hiatus” so Lewis could pursue a solo career…as a country artist. Last fall, said solo career took a hit when Lewis fucked up the lyrics to the “Star Spangled Banner” in front of millions of people tuned in for the fifth game of the World Series. Despite Staind’s recent decision to reunite, the 43-year-old frontman’s drastically different solo endeavor still plays out. In fact, he’ll play The Rave tonight. I won’t be there, and not just because the venue will not grant us credentials anymore. It’s because I recently saw the dude from Staind—Aaron Lewis himself—headline a Memorial Day show at the “World’s Largest Brat Festival” and, holy shit, it was weird.

Every May on the outskirts of Madison, Brat Fest celebrates Wisconsin’s most famous encased edible with four days of food, (alleged) fun, hundreds of thousands of sausages, and about 100 live acts all converged on a grassy parcel of land between Lake Monona and the Alliant Energy Center. Despite taking place within the border of the capital city, which is arguably the state’s most granola, open-minded city, Brat Fest seems to be an embassy wherein unironically jorts-clad people can let their freak flags (and a few confederate flags) fly as they feast upon festival-priced tubes of inorganic animal protein while they enjoy music they’d nary encounter near the capital building, on the terrace, nor anywhere on Willy Street. This year’s entertainment lineup featured Bret Michaels, Charlie Daniels Band, a wide range of Christian rockers shredding for God on the Lifest Stage (peace be with you, Sidewalk Prophets), hair metal tribute act Cherry Pie, the buttrock purveyors of Tantric and, of course, a spirited Monday afternoon Brat Fest finale from Aaron Lewis.

I arrived at the Brat Fest grounds around 3:30 p.m. Monday, about an hour before Lewis’ posted 4:30 set. I should mention that the event is free and, excluding a person I went with having her purse inspected, nobody working seemed overly concerned with what’s being brought into the temporary gates. If I ever go again (that’s a hard “if”), I’m absolutely smuggling in a flask. Anyway, with an hour to kill, I procured a pre-poured and lukewarm plastic pint of Capital Brewery’s Grateful Red IPA and waited in line to—in the spirit of the event—purchase one of the 159,608 brats that would be sold during the four-day affair. As I was herded into one of the numerous lines beneath an arrow accompanied by the word “FOOD,” I heard the weathered voice of Tantric frontman (and only remaining original member) Hugo Ferreira belt out the semi-memorable lines from such radio rock quasi-hits as “Breakdown”, “Astounded” and…I think those are Tantric’s only two songs, but I can’t be sure. After being corralled into another group of lines emblazoned with a bold “CONDIMENTS” label, I stood near a garbage can and ate my messy, pre-wrapped wurst, finished the last temperate dregs of league average IPA, and took in the scene.

By that point, Tantric was finishing up its set, and my companions and I were drawn to a side stage where Denim N Leather (“Wisconsin’s premier tribute to Headbangers Ball“) was capably mowing through material from Cinderella, AC/DC, Ratt, Ozzy Osbourne, and more, while a few hundred people chatted near the main stage in tempered anticipation of the day’s final act. At the stroke of 4:30, Lewis and his backing band came out to the stage with a massive American flag taking the place of a banner. As Lewis and company took in the modest mid-afternoon reception, the band set the set into motion, and simultaneously set the tone for the performance, with “Country Boy.” The opening song is an odd to the country roots of the Vermont-born singer, whose most notable band was formed in a Massachusetts city with a population exceeding 150,000.

Here are some select lyrics from the song:

I take zero issue with Lewis’ national pride and respect for American troops (both of which are also expressed in the song), but it was admittedly odd to hear a melody that doubled as a desperate justification of his country boy qualifications when I legitimately only knew of his Staind shallow cuts. Lewis dressed the part as well, complete with a short-sleeve flannel shirt, a beat up ball cap, and weathered jeans. A portion of his “Don’t Tread On Me” neck tattoo could be read on the stageside monitor. Was the angsty 30-something with a pierced eyebrow, baggy black shirt, and notebook of morbid, bleak lyrics still somewhere beneath that country-fried facade or was the fiscally conservative outdoor enthusiast and proud tractor owner who surely now regretted his tribal tattoos the true Aaron Lewis? Subsequent songs would hint at the latter. As the tour hardships outlined in “Forever” spread through the warm spring air, some of the slowly growing group of brat lovers looked on with slight interest. Others openly talked.

Knowing his audience, Lewis’ between-song banter came dressed in a shaky southern lilt. “I wrote this song for all us northern rednecks out there,” he said, before assuring the audience of his assertion with lyrics about wearing Carhartt, paying his taxes, and protecting his kids all clumsily wedged into modern country mold. Employing the same accent he somehow obtained in rural Massachusetts in the last three years, he chased that ode to the northern redneck with “a song about a gun” called “My Grandaddy’s Gun.” That was enough to push one woman over the edge. “Outside!” the lady screamed. “Something from Staind!” As that’s likely not the first time he’d encountered such a request, Lewis made sure to pepper in a cut from his longtime band every half hour or so, starting with “Right Here.”

While appeasing most of the heat weary audience, the Staind insertion only drew attention to exactly how disparate Lewis’ two musical vehicles actually are. Yes, time, influence, and full artistic license surely had some impact in the sonic sidestep, but with such a stark difference in both the music and how Lewis dressed, acted, and even spoke, it was tough to take any of it seriously. As the loudest cheer to that point subsided after that Staind song, Lewis reverted to Southern dandy mode, saying, “This is a brand new song. I wrote it about what goes best with brats, and that’s drinkin'”

Once again, using the letter G was optional. He made another diesel truck reference and touted whiskey. That was echoed with a track about the red, white, and blue (like the flag!), then one called “That Ain’t Country” that’s about how mainstream musicians “are sucking the life from us country people.” Lewis was only a few hundred yards from the Alliant Energy Center. Yet, in many ways, he couldn’t have been further away from the 10,000-plus capacity arena his primary project headlined in 2006. It’s as if he was halfheartedly following a smudged, first draft blueprint of Darius Rucker’s post-Hootie career arc, except Rucker would never reluctantly play “Hold My Hand” to keep people in folding chairs. “That Ain’t Country” was followed by Staind’s biggest hit, “It’s Been A While.” I’m no country expert, but THAT ain’t country, Mr. Lewis. 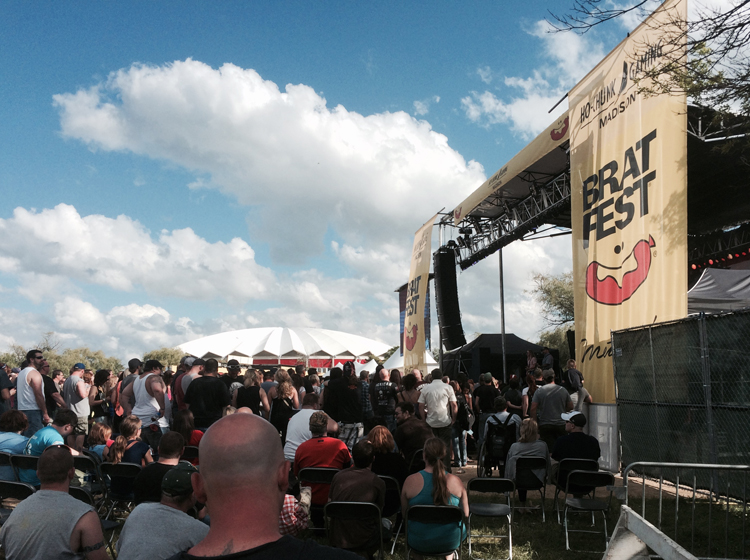 That song sent Lewis’ backing band off stage and left the genre-hopping Brat Fest headliner on stage to play stripped down renditions of more Staind songs of yore. Shedding his country accent suddenly, his acoustic version of “So Far Away” actually reminded me that he has an admittedly good voice when used effectively. Then he covered a Rascal Flats song and played a Staind-like solo song called “What Hurts The Most.” Of course, the performance and Brat Fest 2015 ended with “Outside.” Ironically, the song that first put Aaron Lewis on the musical map and his trusty north star to help lead him home when he ventured so far from his past work is about seeing one’s true colors. Filing out of Brat Fest during the finale to beat traffic, I heard Lewis somberly sing “I can see through you, see to the real you.” I believe I saw the real Aaron Lewis at the world largest bratwurst festival, but he was split between two drastically different personas. To be honest, I’m still not quite sure why I even went.