Beginning Thursday, September 24, the 2015 Milwaukee Film Festival will transform Milwaukee from a drab, black-and-white wasteland into a dazzling, Technicolor utopia. (You know, like in The Wizard Of Oz and that one part in Bon Jovi’s “Livin’ On A Prayer” video.) The 15-day extravaganza will feature 303 movies—27 more than last year—lighting up the screens of the Landmark Oriental and Downer theaters, Fox-Bay Cinema Grill, Times Cinema, and Avalon Theater. Crowd-pleasing features, all-too-timely social documentaries, plenty of local love, and fucked-up midnight screamers are just a few of the fest’s highlights. Toss in panel discussions, parties, live music at The Hotel Foster, and a whole lot more and you have one of the best events in Milwaukee, hands down. Here are 13 reasons we’re excited for the 7th annual Milwaukee Film Festival.

1. Opening Night (Thursday, September 24 at Oriental Theatre and Kenilworth Square East, 7 p.m.)
MFF2015 is loaded with challenging, off-the-radar films and weighty, important discussions. But Opening Night is all about two things: a sure-to-please movie and a can’t-miss party. This year’s Opening Night film is Youth, an early Oscar favorite from Italian director Paolo Sorrentino (This Must Be The Place). Starring Michael Caine, Rachel Weisz, and Harvey Keitel, the film follows two aging best friends on a trip through the Swiss Alps, and makes a case for late-in-life experiences and epiphanies. Immediately following the film, three floors of the nearby Kenilworth Square East will play host to the Opening Night Party, complete with food, drink, and music from the Florentine Opera Company and Tigernite. It’s time to come out, be seen, and hobnob with the hobnobbers. [Matt Wild]

2. Cinema Hooligante program
Long the home of all things bloody, raunchy, and gleefully offensive, the Milwaukee Record-sponsored Cinema Hooligante program has grown up in recent years. Yes, this year’s lineup still has plenty of gore and T&A (or, in the case of U.K. horror-comedy Nina Forever, gory T&A), but there are also sci-fi musicals (Bang Bang Baby), animated Edgar Allan Poe shorts (Extraordinary Tales), retro-future ’80s nostalgia machines (Turbo Kid), and a movie where dogs get really pissed and wage war with the human race (White God). Oh, and did we mention Cinema Hooligante 2015 also features 35mm screenings of Jaws (Sunday, September 27 at Oriental Theatre, 1:45 p.m.) and The Shining (more on that below)? We may be biased, but this program is one of MFF2015’s best. [MW]

3. The Look Of Silence (Saturday, September 26 at Fox-Bay Cinema, 4:15 p.m.; Friday, October 2 at Downer Theatre, 4 p.m.; Monday, October 6 at Avalon Theater, 7 p.m.)
If you missed The Act Of Killing at the 2013 fest, we urge you to see it as soon as possible, assuming you can stomach a documentary in which Indonesian gangsters remorselessly—at times, gleefully—reenact murders they actually committed during their country’s bloody Communist purge in the mid-’60s. Don’t say we didn’t warn you: it’s one of the most gut-wrenching films ever made. The Look Of Silence, a companion piece released two years after Killing, flips the point of view around to the victims’ side. It’s not going to be as viscerally appalling as Killing, but judging by the awards it has racked up so far, it’s bound to be comparably powerful. [Cal Roach]

4. Competition program
Everyone goes to the movies for different reasons. Some like to be transported to another country, to visit a foreign land without leaving their seats. Others like to chew on social issues, to take a deeper look at the stories in the news. And then there are those of us who like to immerse ourselves in cinema to be challenged—not just by content, but also by form. Those of us that don’t mind being slightly confused by a storyline, think it’s okay to not hear every last syllable of dialogue, who would prefer for the ending to leave us slightly unsettled. We want the film to linger like a hangover for days, weeks, months—hopefully years. If you are in that group, then you are most excited for the Competition program films. We have no idea how MFF can top last year’s jury winner, The Tribe, but from our viewpoint, The Russian Woodpecker is where we’re starting to place bets. Historically, these films are hard to find after the fest, so this 15-day window is your fleeting glimpse into the future of the art form. [Blyth Meier]

5. Milwaukee Shows (Sunday, September 27 at Oriental Theatre, 8 p.m.; Friday, October 2 at Oriental Theatre, 6:30 p.m.)
While the festival has ballooned into a full-fledged international affair, MFF brass wisely saw fit to give local filmmakers a forum to showcase their work before hometown audiences in peak time slots. The two Milwaukee Shows bring about an array of shorts from an eclectic assemblage of visionaries whose only commonality is their Milwaukee affiliation. Erik Ljung and Kurt Raether return with work for the second straight fest. We’re especially intrigued by the deceivingly dark Lemon. [Tyler Maas]

6. A slew of law enforcement commentaries
Nothing if not timely, this year’s fest features several films that deal with civil rights struggles and victims of police misconduct, as well as some of the difficulties cops face in the community. Cincinnati Goddamn examines the events surrounding the 2001 Cincinnati riots; The Black Panthers: Vanguard Of The Revolution is a Stanley Nelson documentary about, well, take a guess; and festival centerpiece Peace Officer tells the tragic tale of former Utah sheriff William “Dub” Lawrence and his experiences on both sides of the violence. For a look at issues closer to home, 30 Seconds Away: Breaking The Cycle tackles Milwaukee’s homelessness problem from a law-enforcement perspective as well as from other points of view. And don’t miss the community-police relations panel on Saturday, October 3 at 3 p.m. at Kenilworth Square East, for those who have some interest in actually working towards possible solutions instead of merely tapping out hashtags on Twitter. [CR]

7. Stanley Nelson Tribute
Visiting the festival this year is a certified national treasure, Stanley Nelson, a documentary filmmaker with a slew of awards to underscore his impact: a MacArthur “genius” grant, an Emmy award, a Sundance Special Jury Prize, a Peabody award, and the National Humanities Medal. The film he is bringing to MFF, The Black Panthers: Vanguard Of The Revolution, is the first in a promised trilogy on African American history called “America Revisited.” For those engaged in the #BlackLivesMatter movement, this film provides a critical framework for the ongoing struggle against racism. Nelson will be conducting a Masterclass for local filmmakers during his visit to Milwaukee. Catch up on his last two docs, Freedom Riders and Freedom Summer on pbs.org before his visit. [BM]

8. Call Me Lucky (Monday, September 28 at Avalon Theater, 4:15 p.m.; Wednesday, September 30 at Downer Theatre, 9:30 p.m.; Saturday, October 3 at Times Cinema, 7 p.m.)
Every now and then, the stars align and the Milwaukee Film Festival occurs at the same an indie flick that would otherwise bypass our city is released, allowing Milwaukee to host a film we’d otherwise need to wait to see months from now. Case in point, the just-released Call Me Lucky, a rare (and actually serious) departure from acerbic blue comedic director Bobcat Goldthwait. The documentary chronicles Boston comedy legend Barry Crimmins. Uncomfortable yet important, the film recounts Crimmins’ childhood rape and documents the integral role the funnyman played in establishing legislation to combat online sharing of child pornography. Weighty as its is, Goldthwait also assures laughs along the way. [TM]

9. The Milwaukee Music Video Show (Wednesday, September 30 at Oriental Theatre, 6:30 p.m.)
Though there doesn’t seem to be a home for music videos these days, goddamn if musicians aren’t still making them. Actually, there’s never been a more fruitful time for Milwaukee musicians to adapt their songs to visual formats. Bands and rappers are collaborating with area filmmakers to forge interesting, fun, and altogether ambitious music videos that range from animated pieces, elaborate storylines, and simple-yet-satisfying concepts that give songs extra layers. Since early 2014, the 17 pieces featured in this year’s Milwaukee Music Video Show—including clips from Field Report, Tigernite, Maritime, Lex Allen, Calliope, and more—are the vanguard of Milwaukee-made music videos. [TM]

10. Avalon Atmospheric Theater & Lounge
In the eternal showdown between Riverwest and Bay View, 10 points to the south siders for re-opening the Avalon this year. Owner Lee Barczak added some nice upgrades (stadium seats, quality food service, cozy bar off the lobby) into his long-promised neighborhood cinema, restoring it to its former glory complete with a beautiful marquee and a star-lit ceiling. Sure to be embraced by film lovers along KK and beyond, the Avalon is like the Downer South, away from the bright lights of the Oriental’s madhouse lobby, but still filled with old-school vibes. As a bonus, there are roughly 100 great restaurants within two minutes, so you really have no excuse for that strict Popcorn-and-Junior Mints diet during the fest. Here at Milwaukee Record, we love this new movie house so much, we’re hosting our own screening there tomorrow night! (Tickets are almost gone! What are you waiting for?) [BM]

11. The Seventh Seal (Sunday, October 4 at Oriental Theatre, 4:15 p.m.)
Each year, Milwaukee Film focuses on a particular area of world cinema, and this year’s Passport: Sweden program wouldn’t be complete without one of director Ingmar Bergman’s classics. Luckily for all of us, they went for the gold: Bergman’s breakthrough masterpiece, The Seventh Seal, in all its 35mm glory. The iconic image of Death as a pale figure in a black cloak, as portrayed by Bengt Ekerot, is burned into the memories of most cinephiles, and the notion of challenging Death to a chess match has infiltrated popular culture in more ways than we could count, even inspiring another pinnacle achievement in 20th-century filmmaking. (Yes, we’re referring to Bill & Ted’s Bogus Journey.) [CR]

12. The return of the Stop Making Sense dance party (Saturday, October 3 at Oriental Theatre, 11 p.m.)
Returning to the Milwaukee Film Festival for the third year in a row is Stop Making Sense, Jonathan Demme’s untouchable, unstoppable, and unbelievable document of a 1984 Talking Heads show. Oh, but it’s not your normal MFF screening: In honor of the film’s long Friday-night run at the Oriental in the mid-to-late ’80s, Milwaukee Film encourages the audience to applaud, cheer, and dance, dance, dance! throughout the 90-minute musical masterpiece. (Just don’t dance onstage in front of the screen like some goofballs did last year; you’ll get kicked the fuck off.) Bring your best giant suit (and/or boombox with a tape you want to play) and prepare to burn down the house. [MW]

13. The Shining with John Axford (Tuesday, October 6 at Oriental Theatre 9:45 p.m.)
Heeeeeeeere’s Johnny! For the third year in a row, former Brewer (now Colorado Rockie) John Axford returns to the Milwaukee Film Festival to present a film from Stanley Kubrik’s oeuvre, and this is the one we’ve been waiting for, folks. Screening on 35mm for its 35th anniversary, The Ax Man brings us what some call the scariest film of all time, The Shining. Fingers crossed that his game schedule allows him to present in person, as he was last year for Dr. Strangelove. Is it too much to ask him for a Wendy bat-swinging reenactment in his intro? Dare to dream, Milwaukee. [BM] 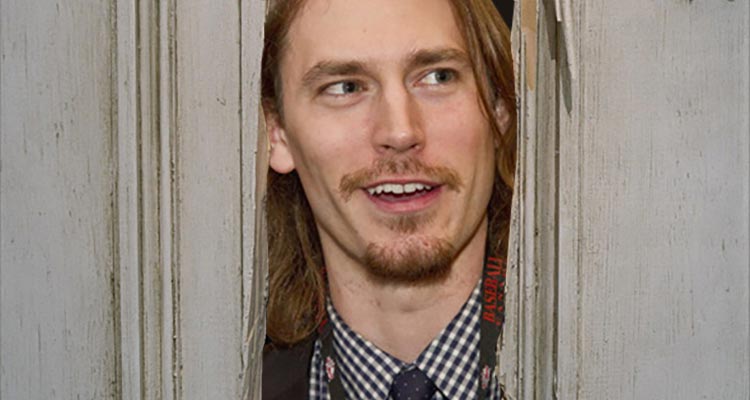