Though metro Milwaukee is the most densely populated part of Wisconsin by far, the state’s largest city and its surrounding suburbs still manage to offer residents an opportunity to witness our fair share of nature’s glory. There are foxes and coyotes known to roam Bay View. Turkeys famously call the East Side home. Animals straight-up hunt prey downtown. Some sort of half-man, half-wolverine creature walks all around the city all the time, and Milwaukee was left to wonder if a lion was actually in our midst a few years back. Lately, a Glendale resident has slowly but surely forged a friendship with another furry creature, one cashew at a time.

A little over a month ago, Bruce Dierbeck started noticing a very distinct squirrel frequently visiting his yard when he was outside working, reading, or relaxing with a coffee or beer. 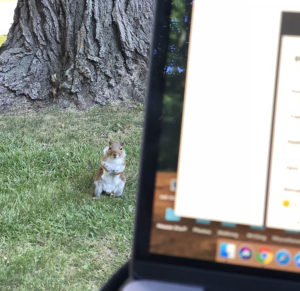 “He’d pretty regularly show up in the morning and again after work. He’s kind of a beefier squirrel. Is that a thing? Can squirrels be beefy?,” Dierbeck says. “He just has a look that when I see him, I know it’s him and not one of the other neighborhood squirrels.”

Dierbeck—a longtime The Joy Of Painting fan—decided to name him “Peapod,” after the squirrel the host Bob Ross domesticated and would hand feed. Knowing the legendary painter of “happy trees” was able to successfully earn the trust of a squirrel, Dierbeck set out to win the friendship of his own personal Peapod.

“The first day or two where I decided to feed him, I had to toss the food to him because he would still stay about 10 feet or so away. But I could tell he was trying to work up the courage to come closer because of how he kept pacing back and forth, taking one step forward, two steps back, and sideways,” Dierbeck says. “I knew that if I was patient, he’d see I wasn’t going to hurt him. And because I had noticed his routine, it was easy to build that familiarity in a few days, since he’d see me a the start and end of each day.” 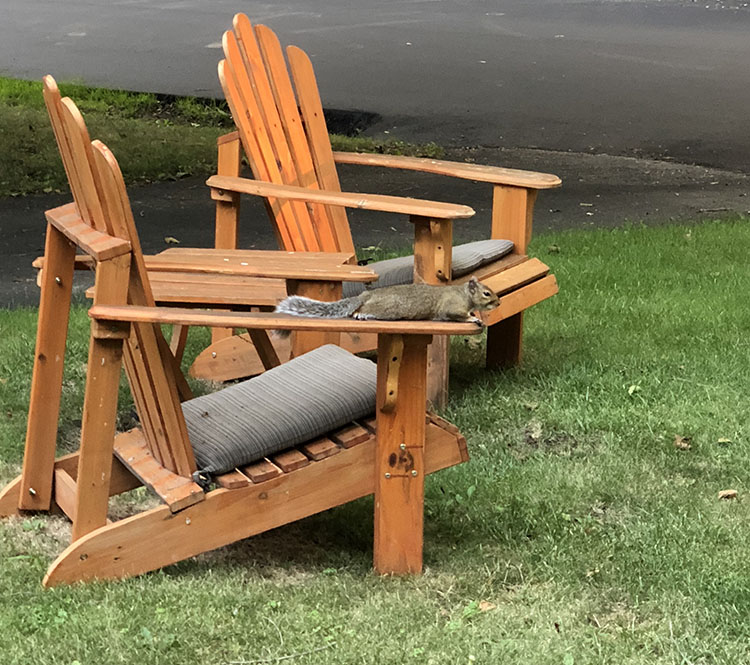 Within a few days, a pattern was formed and trust was built. On the rare days Peapod wouldn’t visit, Dierbeck says he’d leave some food on Peapod’s “favorite chair” for him to enjoy later.

“I’m not even joking, he hangs out on that armrest waiting for me now, some nights,” Dierbeck says. “One day, I walked to my front door and he was lounging, all sprawled out on the armrest of the chair in a Burt Reynolds pose.” 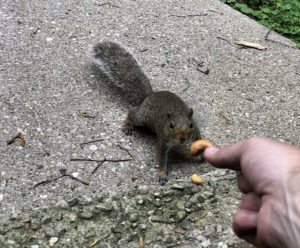 So what does Peapod eat?

“Peapod’s all about the cashews. He has expensive taste,” Dierbeck says. “He’ll take the almonds, but he doesn’t seem to like them as much. I’m figuring it’s because they’re tougher to chew on. Like, I legit think he can tell the difference when I hold up a cashew and wave it in his direction versus almonds. He doesn’t come over nearly as quickly if I’m not showing him I have the good stuff.”

Last week, when he realized he was running low on cashews, Dierbeck ordered more from a delivery service to give to his squirrel pal. Yes, Dierbeck was struck with the realization that he was having Peapod deliver food for Peapod.

“Then I stopped mid-chuckle and thought, ‘Shit, is this really what being 40 years old looks like?'” 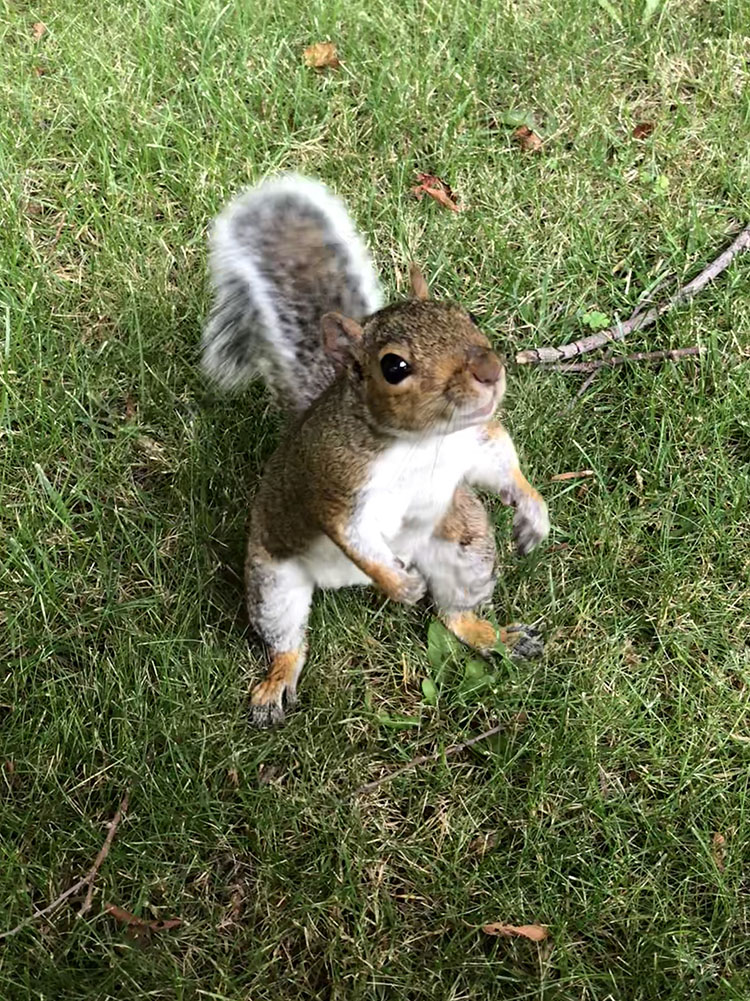 While he’s a little worried about “coming off as the crazy squirrel guy,” Dierbeck ultimately thinks this unlikely friendship in which a skittish animal now feels (comparatively) comfortable coming within inches of a human is a positive development in an increasingly negative world. He’s been surprised by the overwhelmingly pleasant reactions he receives when he posts videos and photos on Facebook. 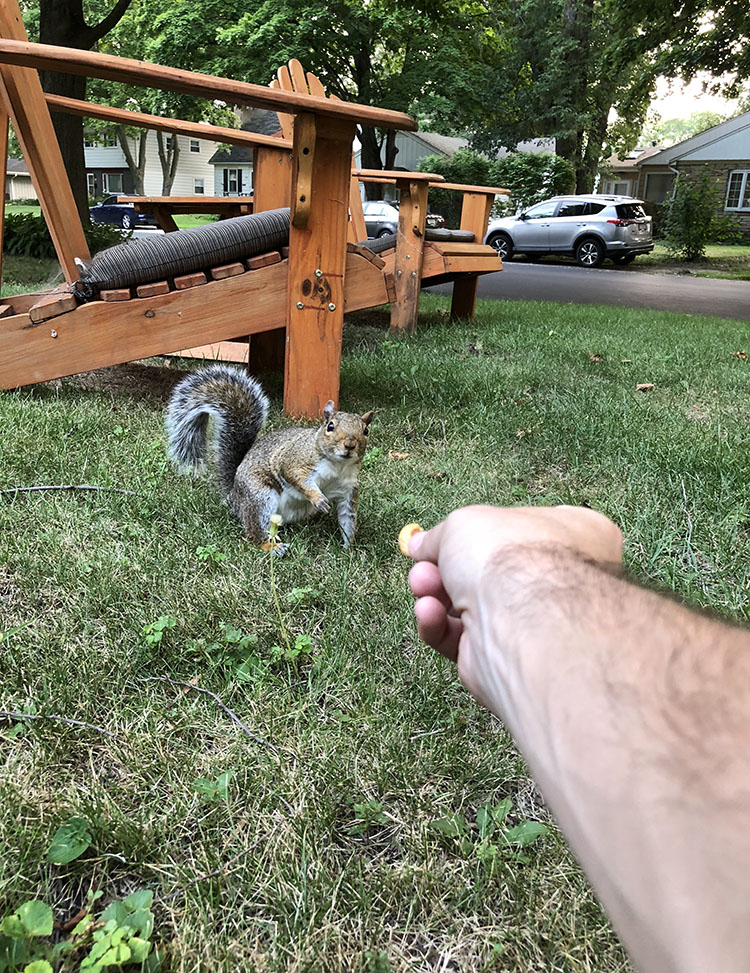 “I mean, I didn’t think anyone would care how much joy I’ve gotten from becoming friends with a neighborhood squirrel, but maybe it shouldn’t really surprise me all that much when you think about how much anger and frustration we’re surrounded by on social [media] lately.”

In the grand scheme of things, feeding and forming a transaction-based relationship with a squirrel doesn’t amount to much. There are far bigger things to worry about and much more important news to consume. Still, in an ever-worsening world, the tale of Peapod the brave Glendale squirrel and his kindhearted human chum is a small-but-necessary palate-cleanser that might help make life at least a little bit better.

“A dude taking happy little selfies with his new squirrel friend is suddenly a breath of fresh air in a newsfeed, I guess,” Dierbeck says. 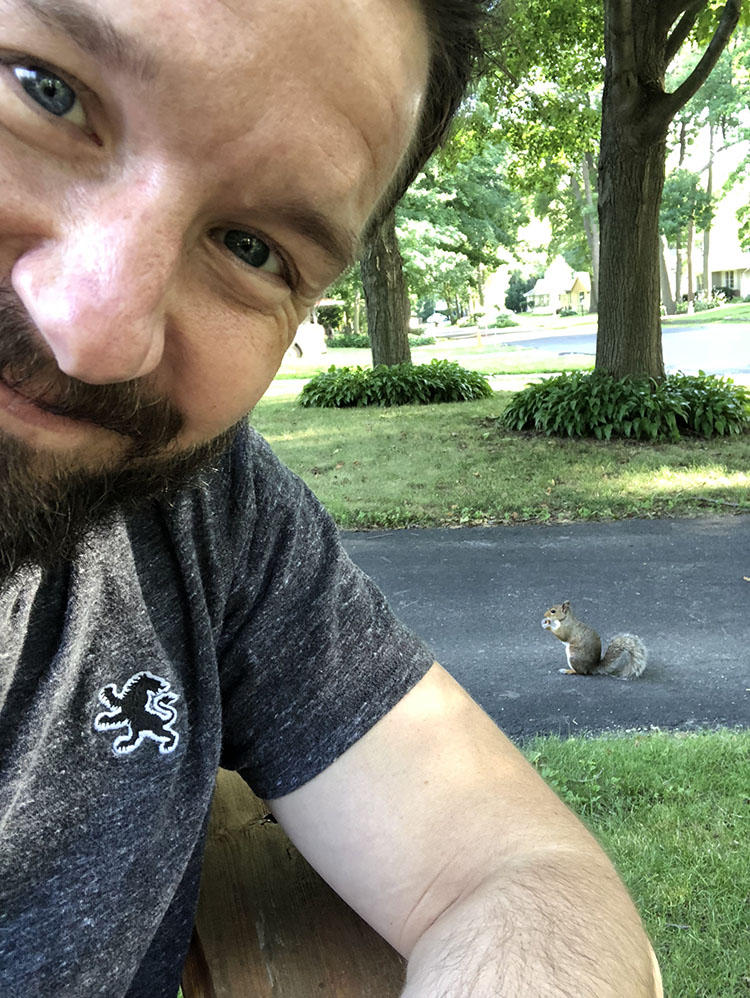 Here are more pictures of Peapod. 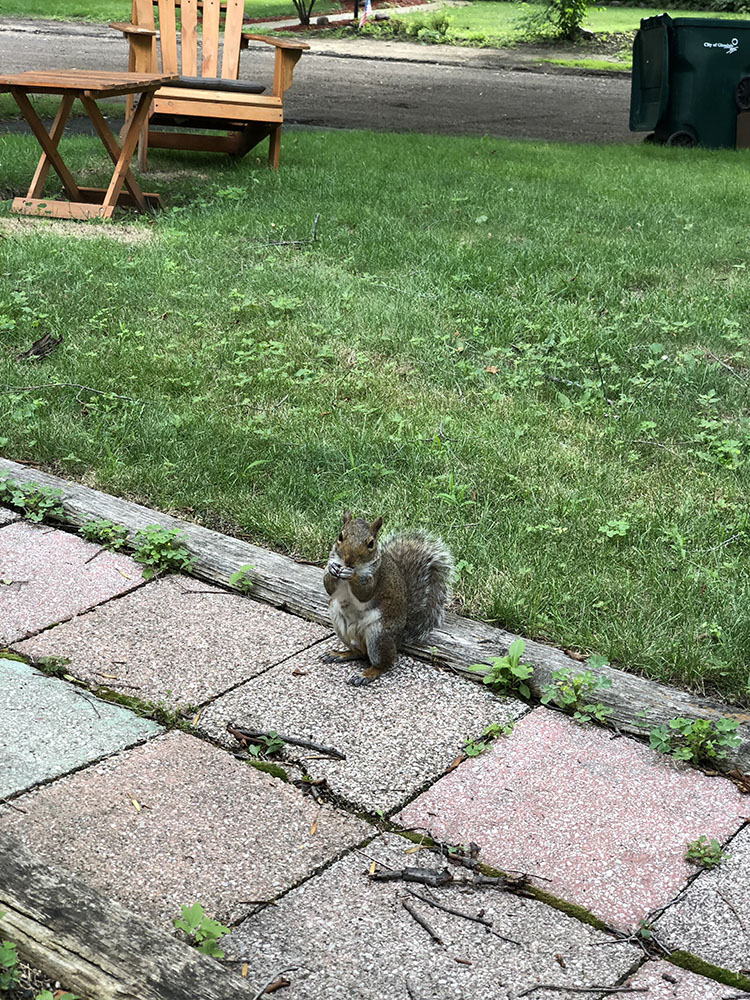 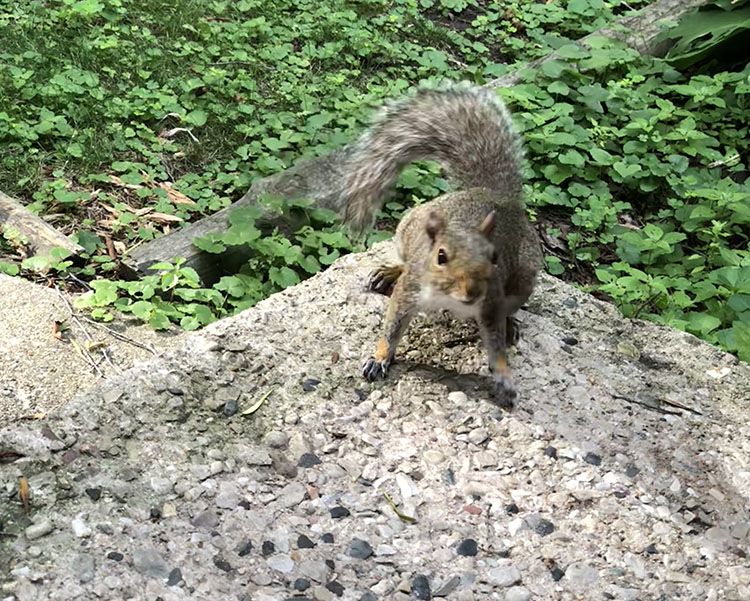 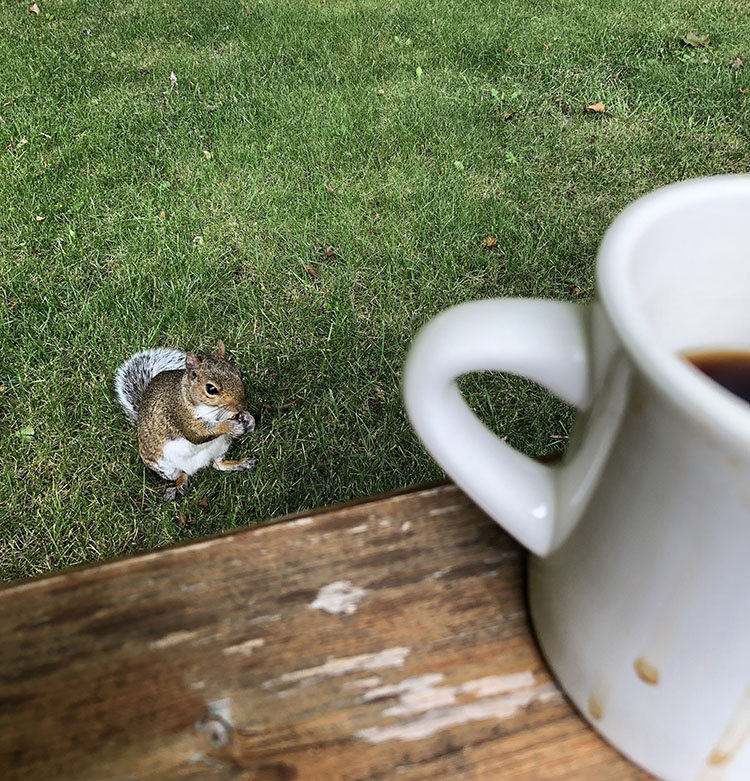 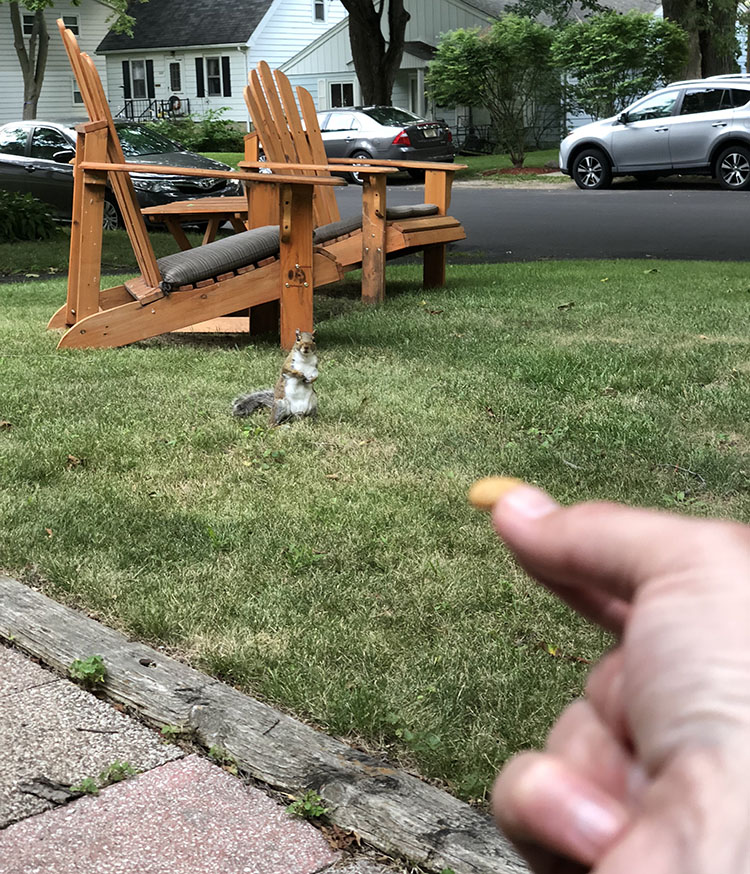 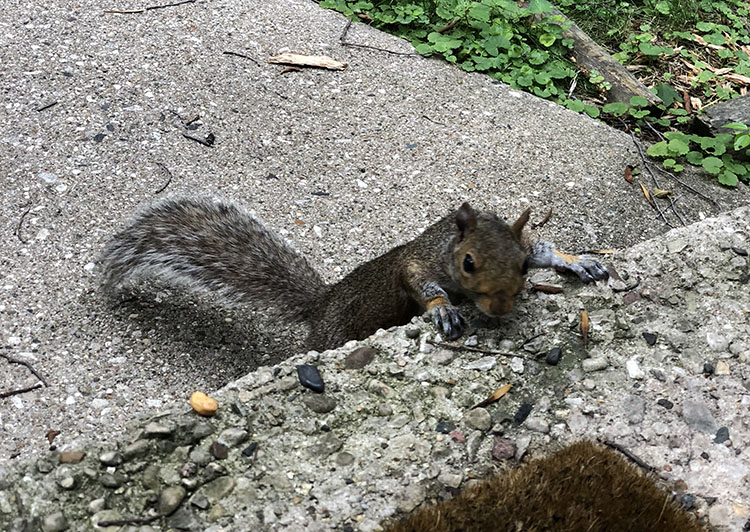 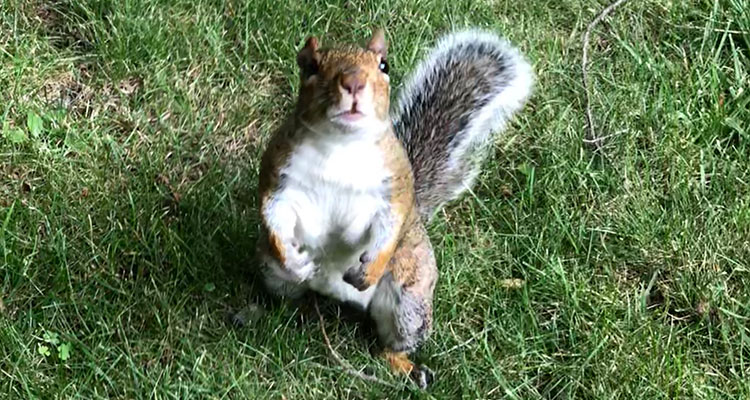