One of Milwaukee’s longest running bands will part ways after one last show this Saturday. Highlonesome, which formed in 2005, has decided to amicably split after almost 12 years of playing their mournfully upbeat mix of bluegrass, punk, folk, country, and just plain rock ‘n’ roll.

“This is the last time you’ll get to see us,” guitarist and lead singer Noah Tyson says. “No more excuses. This is it. It’ll be a rowdy good time.”

Saturday’s show will take place at Bremen Café, a Riverwest bar that has hosted Highlonesome more than any other venue. Highlonesome upright bassist Ian Watson said it’s been a favorite neighborhood hangout of the band and friends for many years.

“It’s just one more party for all of our friends who have always supported us,” Watson says. “It will almost feel like a reunion. Everybody gets together and has a good time for a night. And that’s the only way I would want to end the band.”

Tyson, who started the band and is the primary songwriter, grew up in Illinois, Georgia, and Milwaukee, surrounded by music.

“My parents were very musical,” he says. “They took me to my first show when I was like two.”

His parents’ close friendship with R.E.M. lead singer Michael Stipe exposed Tyson to a handful of successful musicians at an early age. In fact, in a true “who’da thunk it?” twist, Tyson and his older brother, Evan, served as inspiration for Stipes’ film company’s name: C-Hundred Film Corp.

“Me and my brother just started a band. I was probably like six and he was eight or something,” Tyson says. “It was just a little band. We had one radio show and it was a total flop. I think the tape is somewhere. My brother named the band C-Hundred and Michael Stipe liked it so much that he asked if he could use it. I actually have the contract somewhere where we just gave him the rights to the name.”

Family life was rough for Tyson, however. The tight-knit brothers pursued music and other art as an escape from troubles at home.

“I discovered that, probably when I was about 11, I finally needed some kind of outlet,” Tyson says. “I started writing poems, but I always wanted to write music. Around the time I was like 15 or 16, I learned guitar. Even if I was just playing two chords and screaming over it, it was still my outlet, my therapy to get through stuff. That’s probably why a lot of my songs are so personal right from the get-go.”

Entrenched in the Milwaukee punk scene in the late ’90s and early 2000s, it was Tyson’s growing interest in folk-country music, like Townes Van Zandt and Hank Williams, that pushed him down the path that would eventually become Highlonesome.

“Initially, it was just me and this dude Dylan, who I had played in a punk band with previously,” Tyson says. “He wanted to do a cow-punk thing and I wanted to just do a folk thing. It kind of just started there.”

When the duo flamed out after just a couple shows, Evan stepped in on snare drum and backup vocals. “That was kind of the original Highlonesome,” Tyson says. 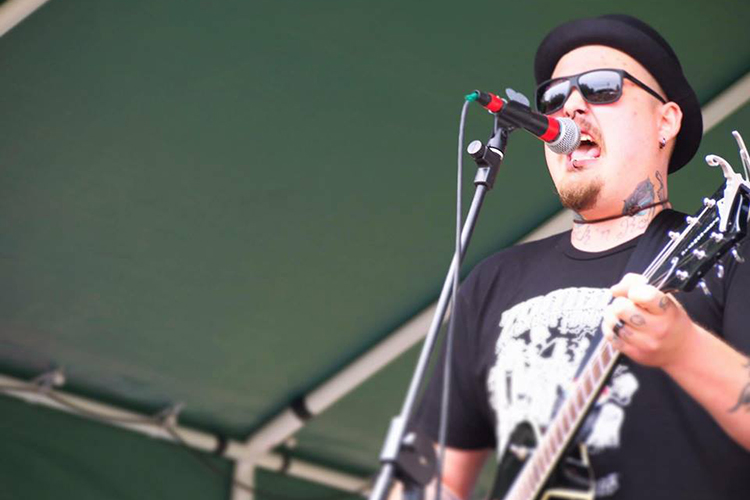 In July 2006, Evan suddenly and tragically passed away in his sleep as result of complications related to a chronic liver condition he had dealt with since childhood. It was less than a week before the biggest show Highlonesome had booked to date: an opening slot for .357 String Band’s Ghost Town release show. Naturally, Tyson was heartbroken after his brother’s death and was in no hurry to get back on stage.

“I wanted to just scrap it,” Tyson says, “but it was actually my parents and [.357 String Band mandolin player] Jayke Orvis—mainly Jayke Orvis—who convinced me to go on because that’s what my brother would have wanted.”

The night of the show, Tyson took the stage alone with a spotlight shining down on Evan’s unoccupied snare drum. It was the first time he had ever performed alone in front of a crowd, and it was more gut-wrenching than he even imagined.

“It was horribly difficult,” Tyson says. “It was one of those things like halfway through a song you’d want to stop and just say, ‘Fuck it.'”

Nearly a decade later, Orvis looked back to that show on his podcast, “Closing Time With Jayke Orvis,” with Tyson and Watson as guests. Orvis, who said Highlonesome was one of his favorite bands of all time, described Tyson’s performance, specifically his rendition of Hank Williams’ “Angel Of Death,” as one of the most moving he’d ever seen.

“It was fucking heavy and amazing,” Orvis told Tyson on the podcast. “I will never forget that night and how everybody was just with you and it was very, very powerful. You went through it. You were crying, but you went right fucking through it and that’s like symbolic to me. That was symbolic. You were barely holding it together, tears were streaming down your face, your voice was cracking, but you just kept fucking going. You hit every fucking word, every note, and made it all the way to the fucking end and everybody was hugging each other, crying, screaming. It was inspiring. And I think that’s what your life is. Your life is a symbol of that.” 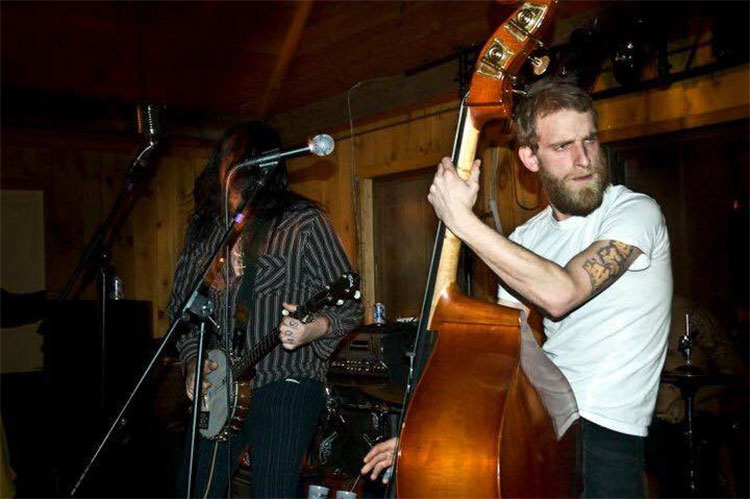 In the weeks following the death of his brother, Tyson decided to keep Highlonesome going. Although the band wouldn’t settle on a long-term lineup for a couple of years, Highlonesome’s wide-ranging mix of influences quickly fused into a signature sound Tyson prefers to call simply “rock ‘n’ roll.”

The band’s first album, Highlonesome, came out in 2008, the same year that Watson and longtime drummer Bryan Morrison joined the band. The group would go on to release three more albums: 2009’s In Life We Can’t Be Free, 2012’s The Unholy Gospel According To… and 2014’s Rock n Roll. With each album, Highlonesome moved a little further away from their folk foundation, getting heavier and faster.

“I think it was just we’d like to be a little more aggressive than what you can do with a purely acoustic sound,” Watson says.

The band carved out a niche for themselves in the growing roots music scene alongside other Milwaukee bands like .357 String Band, Jayke Orvis, Joseph Huber (also of .357 String Band), and S.S. Web.

“[S.S. Web lead singer and guitarist] Henry [Berger] lives a block away from me,” Watson says. “Joe still lives two blocks away from me. Jayke just moved back to Milwaukee. He lives three blocks away from me. We all live in the same neighborhood. It’s kind of funny to know that this small group of friends from the same area has managed to kind of accomplish the same things all over the place.”

The end of the road

The beginning of the end for Highlonesome came when Morrison unexpectedly quit in 2015, something Tyson says broke his heart.

“It was out of the blue and I still don’t even know why,” Tyson says. “He ghosted us. And he’d been playing with us for eight or nine years or something. I did a lot of touring with that guy, and bandmates start to become like family, brothers or whatever. That was just a big hit.”

Tyson and Watson decided to regroup and keep things going. They found a new drummer and a second guitarist—Nick Schafer and Jim Moreno, respectively—that became good friends and meshed well with the band, but they were having a hard time finding a direction to take the music. Should they keep getting faster and heavier or strip it down and go back to their folk roots?

In the midst of integrating the new members and landing on a new musical direction, Tyson got a job offer he couldn’t pass up. He took it, moving his family to Illinois, three hours away from Milwaukee. In the end, it was too much for the band to overcome.

All of the Highlonesome members will continue to play music. Watson, Schafer, and Moreno have formed a yet-to-be-named band and are just starting to write new songs.

“There’s not a whole lot there yet, but it’s something that, once we wrap up Highlonesome, me and those guys will get into it,” Watson says. He also plays upright bass in Last False Hope, a Chicago metal band made up of all acoustic instruments.

Tyson plans to perform as a solo artist and hopes to record in a studio he’s building in his garage. He said the music will probably sound more like early Highlonesome.

“It’s going to be like old-time mountain folk,” Tyson says. “Banjo tunes, folk songs, stuff like that. I might mix it up and eventually do a string band, but right now, I’m just doing it by myself, writing lots of songs.”

In the meantime, Tyson and Watson are looking forward to playing as Highlonesome one last time, especially with their longtime friend Orvis playing the show and perhaps even joining them on stage for a few songs.

“Jayke has been easily our band’s biggest supporter and biggest help throughout everything,” Watson says. “We’ve known each other for a long time.”

Indonesian Junk is also on the bill. Daniel James, the guitarist and lead singer of that band, was briefly in Highlonesome and is also a good friend of Tyson and Watson.

“I’ve known him almost as long as I’ve known Jayke and Joe, since we were punk kids,” Tyson says. “He’s just one of those guys who’s always been around, and his band is awesome.”

Watson promises that Highlonesome fans will not be disappointed.

“We’ll be playing songs off every single one of our albums,” Watson says. “We’ve got a few covers we’re working on that I’m sure will please the crowd.”

While Saturday’s show is likely the last chance to see Highlonesome, Tyson and Watson aren’t willing to completely close the door on the band.

“I mean, there’s always a chance,” Watson says. “I love playing with Noah. I love writing songs with him. I love singing with him. I would be very hesitant to ever say forever-and-ever about anything, especially that.”