Max Holiday has a hard time standing still. Since moving to Milwaukee from Appleton in 2010, Holiday has self-recorded a handful of lo-fi garage-pop songs as Young Holidays, created a band around that name, dissolved said band, created a new pop project called Athletic Supply (briefly dubbed Bleach Athletixx), created an electronic and dance-focused one-man project called Mercury Drums, launched an all-encompassing label called Close Up of the Serene, and masterminded a monthly club night at Quarters called Precognition. The fact that Holiday is still in his early 20s makes his resume all the more impressive, and his future all the more full of possibility.

On Saturday, November 5, Holiday and cohorts Liquid City Motors (Will Mitchell) and MS 115 (Bobby Garvey) will celebrate the one-year anniversary of both Close Up of the Serene and Precognition at Quarters. The show will feature Chicago DJs Jarvi and Pollination Tech, Milwaukee DJs Asher Gray and Deep Freq, the Close Up DJs, and hosts NAGAP and Kari Oki. Milwaukee Record spoke to Holiday about the anniversary party, what separates Precognition from other club nights, and the challenges of promoting dance music in a garage-rock town.

Milwaukee Record: What keeps you so busy?

Max Holiday: I think exactly that, wanting to keep busy. This is what I do, this is what I do with my life. I didn’t go to college. This is the plan from years and years ago, to do exactly this. I’m super fortunate to have had people willing to listen, starting with Young Holidays. Young Holidays was such a great case of getting out there, getting shows, meeting people, recording music. I’m really not one to stick to an idea for any longer than feels completely necessary. I have a tendency to jump around from interest to interest.

The thing about Close Up is that…sometimes I feel sort of scattered. Close Up of the Serene is a really good opportunity to put everything under an umbrella, to put what myself and the people very close to me are doing all under one thing. This feels like something that will have some longevity.

MR: And you still have a more pop-focused live band with Athletic Supply, yes?

MH: With Athletic Supply, it’s really the same concept as Young Holidays. I usually like to have a band of my close friends that I bring to the pop songs I write. I still don’t really know why I sit down and work on music, and why I still write pop songs. But I do, and it works, and we have a blast playing. I always like to keep a live band playing, but the label gives me a lot of opportunities to do some art direction, to do a lot with booking, a lot behind the scenes stuff, and a lot more production.

MR: Do you see a lot of overlap between the rock and club scenes in Milwaukee? Maybe you’re that overlap?

MH: I think Milwaukee can sometimes feel like two different worlds. Milwaukee is such a garage-rock city, such a rock and roll city, such a guitar city, that if you pick up a guitar and play relatively short songs, people want to put it into a certain category. Whereas where we’re coming from might be a completely different world. Of course, I have a foot firmly planted in that stuff. I grew up in rock and roll and punk rock and new wave and everything like that. We’re coming from a certain world and we try to make that translate through Athletic Supply, and through the live show. We have a synthesizer bass, we have Mark [Stewart] on live drums, but we’re really keeping it pretty simple and Krautrock-y. Mark is actually leaving Athletic Supply, he’s really busy with GGOOLLDD, and we’re kind of doing different stuff. So we’re going to be taking the winter to regroup, revamp, overhaul everything, and probably come back in the spring with a drum machine and a sampler and delve more into that world than we have before.

A big thing about Close Up, and a big thing about what I do, is that try not to think about stuff like that and just think about quality. Good, underground-leaning music. I do try very hard to make things cross over. So putting out Athletic Supply releases on Close Up of the Serene is kind of my thing to put it all together. Let the people who are listening to us for the dance music and the electronic music hear Athletic Supply. And let the people who are coming for Athletic Supply and Mark’s project, Pharo, hear the dance records.

MR: Talk about the genesis of Close Up and Precognition. Weren’t they inspired by a fateful night at Quarters?

MH: A couple of years ago, Bobby and I indeed stumbled into Quarters, after only having lived here maybe a year. So Quarters was very new. We didn’t know what we were getting into. I didn’t know who was DJing and don’t know what it was, but it was so loud, so packed, there was a line out the door, and the music was so…it was that kind of party that you see in movies, that you dream about. It just really took us off guard.

So for years, as we developed our sense of club music and developed a huge passion for electronic music and club culture…the goal in mind for a group of people who have similar interests in electronic music usually is to start a regular monthly night. We always, always knew ours would be at Quarters. Peter [Fisher] is the absolute most supportive person to have behind the bar. We feel like Peter actually enjoys our night, not like he’s just bartending and letting us do our stuff. Quarters, at this point, almost feels like a DIY space with a bar and a bartender. It’s a black box that you come in and do your thing, and you’re kind of responsible for your own shit. That works absolutely perfectly for what we’re trying to do. We don’t have a number that needs to get in the door. We don’t have a bottom line or anything like that. We come in, do our shit, and it’s a great symbiotic relationship.

MR: What separates Precognition from the rest of Milwaukee’s club scene?

MH: We saw a gap in the local scene for a serious, heads-down…not a dance party, per se, but something that can be whatever. If someone wants to smoke a spliff before they come and stand in the corner and zone out, or if they want to dance and take their shirt off…it’s music-focused, and huge, huge, huge, hugely focused on the music party. Those are the nights that we really dream about. Ultra-focused music nights, where quality is first and foremost on the agenda. Precognition is not about booking our friends, and it’s not about booking people we’re close with. Quality is completely first.

We don’t feel any connection to the Oak or Site 1A type of club, with the bottle service and the crazy sexism and homophobia and stuff like that. We don’t bill Precognition as a queer party, but it’s run by queer people. We’re very open to queer people. It’s a completely safe space. No nonsense, no bullshit whatsoever.

Close Up of the Serene doesn’t even feel like a year, it feels like we started it yesterday. To kind of sit back and watch things unfold…Asher Gray has his night [Club Ritual] and there are other nights popping up. It does feel like a more cohesive…I hate to even say “scene,” but people kind of catching on.

MR: What can we expect at Saturday’s party?

MH: A huge part of Saturday night is the booking. We have two really great, young, cutting-edge DJs from Chicago. Jarvi and Pollination Tech. Really underground queer club scene. Chicago, obviously, is literally the birthplace of house music, and it has an extremely vibrant scene still, so we’re super lucky to be joined by them. I’ve been watching the two of them and watching that scene for a while, and when it came down to the one-year anniversary and doing guests, I knew it had to be them.

A big part of this…I don’t want to just rehash old Milwaukee trends. I’m young, my friends are young, and we’re newer to this city. We’re kind of doing this in the way we see things, and the way that we want things to run with our people.

MR: What’s in store for the next year?

MH: Even more of a celebration of the past year, I see Saturday as the kickoff to our new year. We have absolutely no sense of slowing down. I’m trying to amp it up one hundred degrees, and have Precognition really focused on bringing in guests from Chicago, Minneapolis, Detroit, and other cities. That’s going to be the focus of the next year.

The label is focusing less on…so far it’s been myself, Will, and Mark kind of working very closely on the releases. Now we have a slew of completely outside releases, but still all Milwaukee. Ken Sabbar from Heat Death is doing a release. Asher’s going to do a record. We’ve got a lot of people working on music.

I bartend Sunday nights at Cactus Club now, so I’m going to be starting another night there that’s going to focus a bit more…I don’t have a name yet, but I’m going to be bringing in more of our local crew and our local DJs for a bit more of a laid-back Sunday night sort of service industry type deal. Precognition will focus on the booking and outside talent, but there’s an increasingly big scene of people doing really great things here that I still want to showcase, and the Cactus Club bar area is really perfect for that.

We’re trying to push things forward a little bit. We live in a garage-rock town, a rock and roll town, but there are a lot of people here doing a lot of other things. I really see this as a kickoff to our new year.

The Precognition one-year anniversary party is Saturday, November 5 at Quarters. Admission is free before 11 p.m., and $5 the rest of the night. 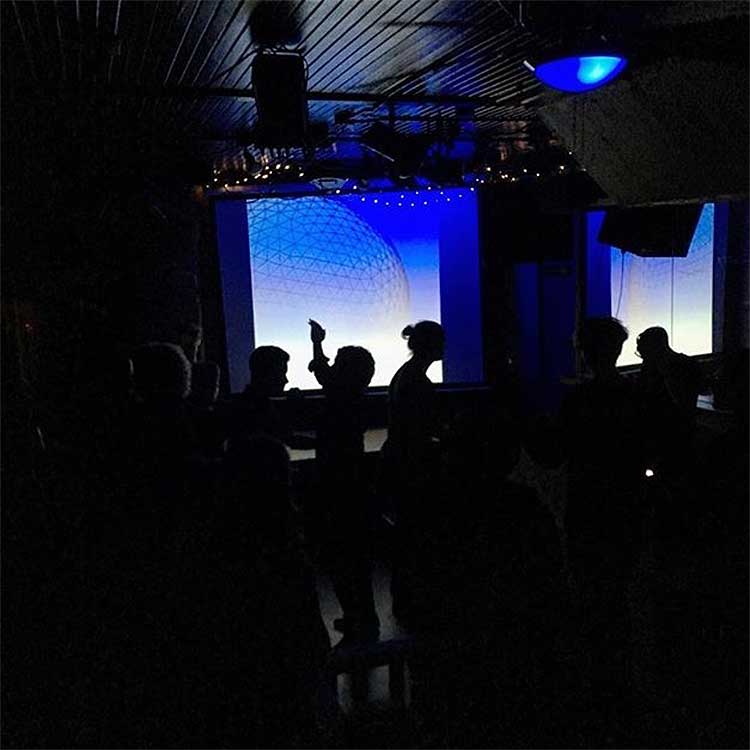