Abby Jeanne capped off a breakout 2017 with her “Electric New Year” show, an unofficial culmination of a year in which the owner of Milwaukee’s most captivating voice released her well-received debut album, earned a number of local accolades, played a flurry of festivals, released a few music videos, and put out her best song to date. Though last year was big for her, Abby Jeanne seems poised for even bigger things in 2018.

Tonight marks the beginning of Abby Jeanne’s “Fire In February” residency. Every Monday night this month, she’ll perform a different set at Company Brewing and will be joined by a different opener who adheres to that show’s theme. Before she lights the fuse on “Fire In February,” Abby Jeanne told Milwaukee Record about her breakout 2017, the reasoning behind her residency, and what she plans to do next.

Milwaukee Record: I feel like last year was your biggest year by far. You’ve had a bunch of music videos, played almost every festival, put out some great and widely-circulated music, and capped it off with the sold-out New Year’s show. Looking back on 2017, what was your perception of it?

Abby Jeanne: I just want to keep going forward all the time. It’s good because I was so scared before. Like, releasing my album last year was the first time I put something out officially and shared my music, my art, and my soul with people. So I kind of didn’t want to look back at it, but I wanted to keep putting stuff out, writing and creating. My perspective [at the time] was that it was fun, but I had to keep going. Now that it’s 2018, I get to look back and think “Oh wow! I did a lot there!” I don’t think you realize how much you’re doing at the time. You’re just doing it. And I was having the best time of my life writing and making videos and meeting people.

MR: Now that do have the chance to look back on 2017, was there any pivotal moment or something that stands out?

AJ: Well, there have been a couple of those. I think the first one was just releasing my record and having a show for it. It sold out in like 10 minutes, and I didn’t even know that people liked me or cared. I didn’t know that people were eager to come see my play and to buy my record. That was just awesome and it felt great. Besides that, I don’t know…everything. Just everything! I think just putting stuff out there like songs and videos and knowing people were probably going to see it was a pivotal moment in itself.

MR: But I feel that implies there must be some confidence behind what you’re doing as well or at least enough positive feedback to prompt you to do that. But what’s the rationale behind doing the residency?

AJ: I’m planning to play lots outside of Milwaukee, so I’m not going to be playing much here for a while. I want to go on tour for the rest of my life and just travel. So I thought it would be cool to do something where people know they can come see me before I come back in summer for festivals and stuff like that. This way, people know they’ll be able to come out on Monday nights in February.

Secondly, I’ve never seen someone do something like this here: a rock and roll residency, where people are going to have a rock and roll party on a Monday night, but they can also be home and asleep by 11 o’clock. I just thought that would be different and cool, especially on a weekday. And people seem to start itching for stuff to do in February. At least I do, so I thought I’d light a fire with Fire In February.

MR: Another aspect of the residency is you’re having a different act open for you every time. Did you handpick these acts to help fit a different theme for each night?

AJ: My sets are going to change every night, but I’m also hoping to create a different environment with each one, so when you go into Company Brewing, it’s not just going to be me on a stage. I want to create an environment to fit both the opener and my musical aesthetic. My whole life is built around environment and aesthetic, and I think it helps change the perspective of the audience. I just want to do something different that I don’t see very often. I don’t ever just get on stage and play during my shows. There’s always an element of surprise, so that’s the plan. Obviously, the music is the main event, but building an interesting environment around it creates a new experience.

MR: You mention the hope to tour more, but what are your hopes and aspirations as a whole for this year once the residency is over?

AJ: I hope to be playing outside of Milwaukee like 80 percent of the time. I’m also working on a new record, so hopefully I can release a new album this year. Really, I want to just keep touring, and playing, and writing new material. I’m just really excited to keep growing, building and making things to put out to grow and expand. I’m really excited.

MR: In the past, I know you basically did everything on your own. You made your own beats, you recorded yourself, produced yourself, and shot your own videos. The two most recent singles were done at Wire & Vice, and I’m wondering if it was hard to hand over your babies to someone else to work with.

AJ: Yeah, I was skeptical at first. But as I got to know [Wire & Vice producer] Daniel [Holter], I learned we work so well together. The creative flows is so open and free and I was really happy about it and excited to explore more options with producers in particular. I’m subtly a control freak because I’ve been so used to doing things myself, so when you share something with someone else, it’s like “Whoa! I’m not used to this!”

MR: So what Daniel do to enhance or to expand the scope of what you do?


AJ: I love this process because it’s all of my ideas—like “I have this idea! And this idea! And this idea!”—and Daniel understands the mind of an artist and can help translate things. I would describe a picture or a landscape or something, then he would help me translate that into sound. He’s someone to bounce ideas off, and we’d go back and forth. He would just soak up all those ideas and reflect something back that’s either a little more condensed or a little more expanded version of my idea. That’s kind of great.

I want to expand that and work with different producers, and I definitely want to work with Daniel again, but I like [collaborating with a producer] so much, so why not try it again? Really, at the end of the day, it’s like having a band. You have to find people who respect your vision and respect your art.

Abby Jeanne’s “Fire In February” takes place at Company Brewing every Monday in February. She’ll be joined by Chicago’s Lucille Furs on February 5, Klassik on February 12, New York-based Fiona Silver on February 19, and Rose Of The West on February 26. Each show costs $10 individually or $30 for all four. 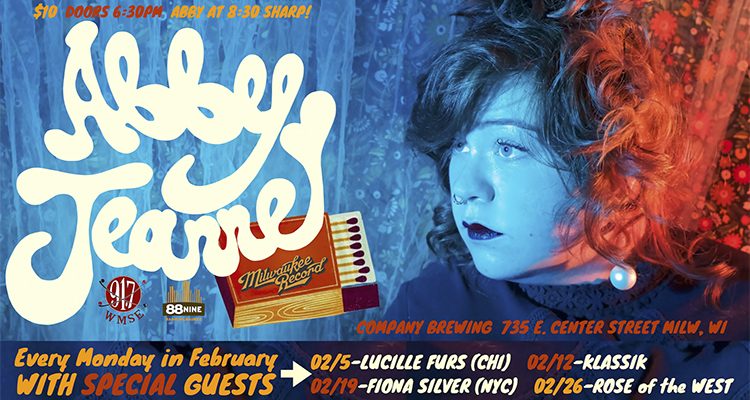