Milwaukee’s south side isn’t for want when it comes to chain restaurants. The airport-adjacent slice of the city has no shortage of dining establishments to welcome visitors to town with a corporately standardized taste of the familiar. In March, Layton Avenue gained another chain restaurant. However, Milwaukee’s new Wild Bill’s Sports Saloon (789 W. Layton Ave., 414-837-6015) isn’t just the first such location in the city, it’s also the flagship Wild Bill’s in Wisconsin. (The others are in Grand Forks, North Dakota and rural Minnesota.) Milwaukee Record took to the frontier in search of western-themed chain food on the south side—mostly because Lazy Suzan wasn’t open.

The space: Though we’d never set foot in the edifice before, we were well aware of the establishment situated at the edge of the southern Milwaukee main drag, kitty-corner from a trailer park and flanked by mini malls. Most recently, the restaurant was Lucky’s Irish Pub, but no sign of the previous purveyor could be found. The sign wasn’t fibbing: this was a surprisingly functional marriage of the western saloon motif to the traditional sports bar. A literal barrel of peanuts welcomed us upon entrance. The interior walls and booths were composed of faux-weathered slat wood, a bull’s skull with glowing red bulbs in the sockets was hanged ominously on a post near the bar, and a weathered colonial-era American flag was proudly plastered on the back wall.

To sate the “sports” side of the chain’s theme, more than 20 flat screen televisions lined the walls and support beams—almost every one playing a different sports network. Moreover, Big Buck Hunter HD: Duck Dynasty Edition, a Fast And The Furious racing game, and a cluster of video gambling machines (for entertainment only!) filled gaps near windows. It’s like Buffalo Wild Wings had a one-night stand with Boone & Crockett and, despite B&C’s pleas, decided to keep the baby.

The service: Our server Aimee didn’t seem quite fluent with the specialty drink list when we’d asked for recommendations. That said, it’s a new place and Wild Bill’s has a fuck-ton of specialty drinks, so we venture Bill himself (wild as he might be) would struggle to advise a libation on the spot. Beyond that, Aimee was attentive and upbeat. Add in daily specials like Sunday power hour, burger deals on Monday, “WILD Tuesday” wing deals, rib and fajita specials, all-you-can-eat fish on Fridays, a chicken deal, occasional bingo afternoons, ladies night, breakfast, kids’ night, a dance club night, and god knows what else to memorize, we felt fortunate she didn’t have a nervous breakdown just attempting to juggle the restaurant’s overly ambitious themes and deal.

Milwaukee Record’s food/drink: Crazy specials and ill-fitting theme nights aside, Will’s biggest fault is its staggering amount of menu items in the realm of both food and drink. There are just 11 tap beer options (with Lagunitas IPA the most exotic), but 10 wines, and an army of specialty cocktails and bomb shots. Enticing as a “Donkey Punch” sounded, we couldn’t turn down the duality of the Coronarita ($8)—a massive lime margarita with a Corona shorty dumped into it. We know Wild Bill’s didn’t originate this, but when in Rome, right? 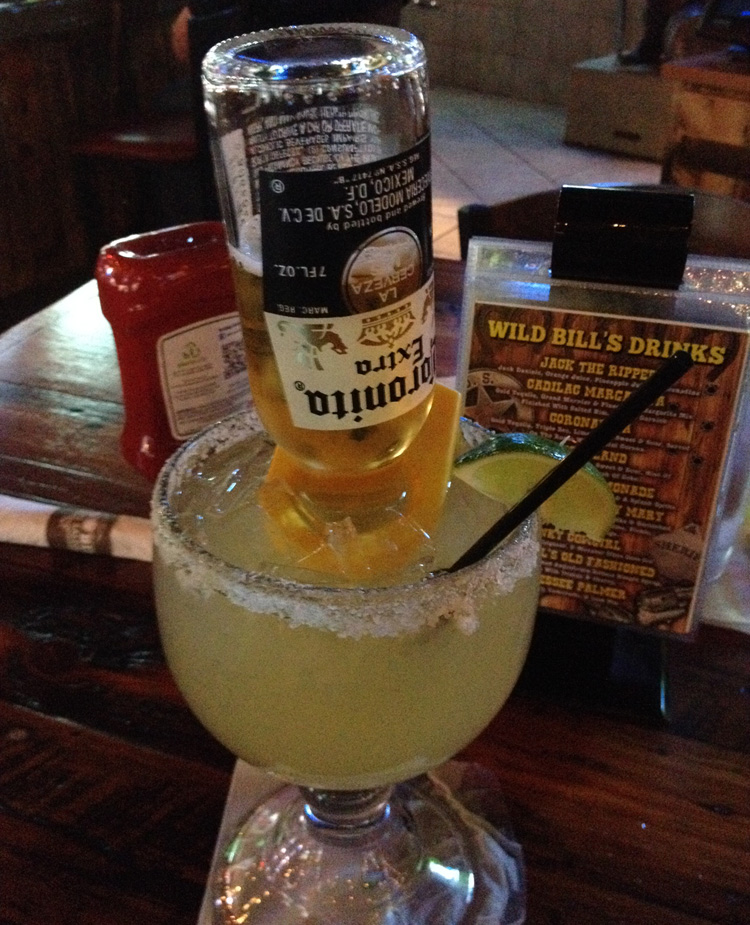 Similarly, between over 20 burgers, a baker’s dozen sandwiches/wraps, select few pizzas, salads, ribs, fish, brisket, culture-crossing appetizers, and something called “Cowboy Favorites,” the decision of what to chase our admittedly tasty Coronarita proved exceptionally tough. Seeing there were 20 sauces spread through four different price ranges, we opted for a dozen boneless wings. Our sextuplet of garlic buffalo was a nice blend of potent garlic and a subtle nudge of heat. Allegedly the spiciest option, our six-piece order of Wild Bill’s Scorching was tangy and had hints of habanero pepper, but was altogether lacking on the heat index.

In all, the offerings were what you’d expect from a franchise. They were well prepared, but in terms of flavor, they landed on the side of safety and test group-approval. Next time, if there is a next time, we’re trying the Peanut Butter Burger.

The verdict: Wild Bill’s simply needs to tamp down the gimmicks and reset its focus on its best attributes: making solid bar food and cheap drinks for sports fans who don’t mind occupying a bit of airport-adjacent old west. If you’re on the south side and want a new spot to watch the NHL playoffs or an out-of-market NFL game while indulging in one of 70-some menu options and partaking in (potentially) two or three overlapping daily specials, by all means, take a walk on the Wild side.