Milwaukee has seen an increase in recent years of coffee shops treating coffee like something to be savored, like a gourmet food item, similar to cheese or wine. From Stone Creek Coffee opening a high-concept café in the Radio Milwaukee building, to Anodyne moving its roastery to Bruce Street in Walkers Point, to Valentine opening a coffee shop on Vilet Street, to Hawthorne Coffee Roasters existing, there are plenty of options for coffee if you’re in the mood for something a bit nicer than Dunkin’ Donuts or Starbucks.

The latest coffee shop to join the already crowded Milwaukee market is Kickapoo Coffee in the Third Ward (232 E. Erie St.). While Kickapoo roasts its coffee in Viroqua, Wisconsin, the style of coffee service is similar to Stone Creek, Anodyne, Valentine, Alderaan, Hawthorne, and Colectivo (Kickapoo location co-owner Scott Lucey hails from Colectivo). We decided to visit the new café on a rainy Saturday to enjoy some coffee and espresso.

The space: The new space sits between the building housing the Hinterland brewpub and the MIAD student housing on Erie, with a modern industrial look complementing the space to its right. Inside the cafe is plenty of seating both at tables and at bars surrounding the counter and brewing area, and along the window facing the street. The interior has a slightly sterile feel to it thanks to the mostly white walls and ceilings. Even with a large community table and a pretty decent crowd for a day that was both rainy and after Christmas, Kickapoo lacked the coziness of Stone Creek and Valentine, or the worn charm of Anodyne and Colectivo during our visit. Along the wall closest to the entrance was merchandise and coffee, which most people have come to expect from a coffee shop.

The service: When we went to order our first drink, we asked the barista, “What coffee on the brew bar would you recommend?” The barista responded by listing off all three coffees currently brewed using a pour-over method, which is when a coffee is brewed to order instead of sitting in a canister waiting to be poured out at a moment’s notice. This led to us randomly picking a coffee to drink. When we went to order our second drink, the baristas behind the counter had changed and were much more helpful with suggesting the best way to enjoy the drink. (“Whole milk all the way!”) Even with the less than helpful response for the first drink, the staff prepared our drinks with such precision and speed you would think the café had been open for months instead of just one week.

Milwaukee Record’s food/drink: Although Kickapoo does offer Rishi tea and bottles of Wisco Pop, we decided to stick to coffee and espresso. The most expensive drink on the menu appeared to be a large mocha ($4.50), but we decided to start off with a pour-over of the Ecuador being served that day ($3.50). The coffee was very smooth, but by the end of the cup it had a bitter taste, possibly due to it having cooled down. While drinking coffee, we decided to grab a glass of water, leading us back to the counter where there were two taps and a tray of small mason jars next to the water taps. The tap on the right poured out water while the one on the left had sparkling water.

Against our better judgment and the knowledge we would spend the bus ride home curled up in a ball feeling like someone punched us in the stomach, our next drink was a cortado with whole milk ($3). The cortado, which was equal parts espresso and milk, was ready in less than two minutes and served in a small jar on a small plate. We decided to grab some sparkling water to wash out the taste of the coffee and sat down with the drink. It was smooth and a bit creamy thanks to the milk choice, making it one of the best cortados we’ve had in Milwaukee.

Although we did not have any snacks with our drinks, Kickapoo did have a small offering of pastries and chocolates, including some muffins, which looked delicious. The café also had a variety of other espresso drinks, including macchiatos, lattes, and Americanos—but don’t expect to get anything too fancy like a Pumpkin Spice Latte.

The verdict: Although the atmosphere wasn’t particularly comfortable, Kickapoo Coffee was bright and featured fantastic coffee and espresso. It’s a welcome addition to Milwaukee’s coffee scene and worth stopping into if you’re near the Third Ward—as long as you can get past the use of jars as a way to serve drinks. 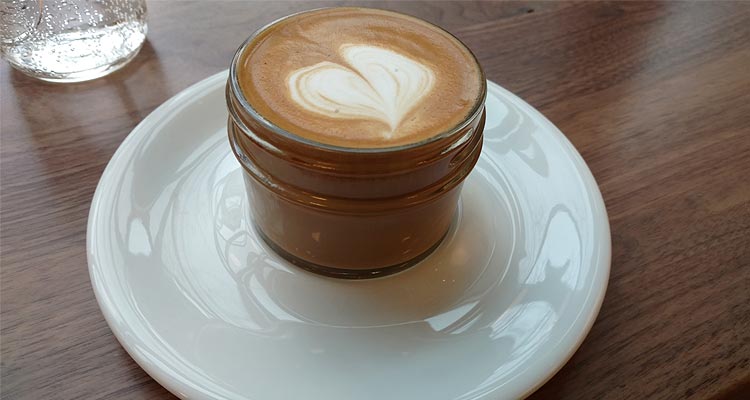