We’ve entered August, but Milwaukee’s festival season isn’t slowing down at all, even though we’re now in the summer’s last full month. In fact, there are some new events that are coming up in August, including this weekend’s Danny Boone Fest outside DanDan and Black Arts Fest at the Henry Maier festival grounds. On August 25, Walker’s Point will also be host to a whimsical new celebration of all things flavorful when FieriCon comes to Milwaukee.

Last November, the inaugural event honoring polarizing Food Network personality Guy Fieri descended on an unsuspecting New York City. Milwaukee native Andy Holcomb, who now lives in Chicago, took notice and had an idea to bring it to the Midwest.

“After reading about FieriCon in New York, I thought about hosting one,” Holcomb says. “My wife said, ‘You have at least 20 jackass friends who would love to do this.'”

Holcomb approached FieriCon founder David Gold about potentially having an installment of the goofy, gluttonous affair in his hometown. With Gold’s blessing, Holcomb set out to plan Milwaukee’s first FieriCon.

“Milwaukee as a city has a gift for day drinking, bar crawls, and anything that is a little out of the ordinary,” Holcomb says. “Also, I don’t think Chicago can handle all the flavor this event would bring.”

Milwaukee’s FieriCon aims to transform Walker’s Point into Flavortown, USA on Saturday, August 25. The bar crawl is tentatively scheduled to start at Lost Valley at 2 p.m. and wrap up at O’Lydia’s at 8 p.m. There are also stops planned at MobCraft, Fuel Cafe 5th Street, Hamburger Mary’s, Steny’s, Central Standard Distillery, and Zad’s. Official maps and schedules will be handed out to participants the day of the Con. 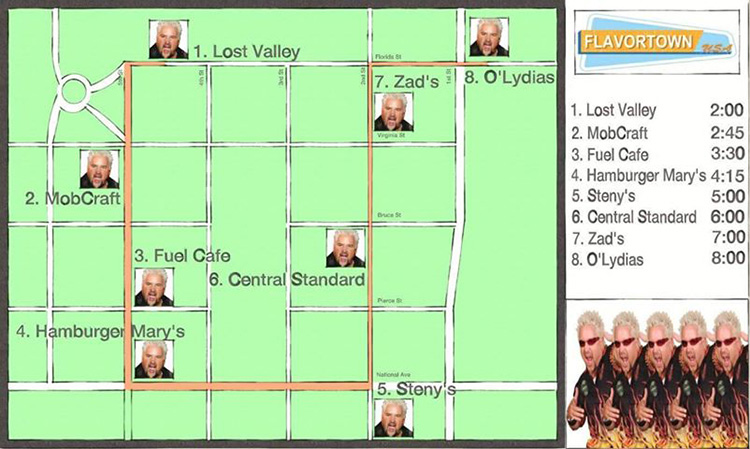 “I’ve always enjoyed that area of town. Also, half the fun of a pub crawl is walking to the next bar,” Holcomb says. “Walker’s Point has a good number of bars to choose from that are spaced out nicely for walking between.”

So what does FieriCon entail? Basically, Holcomb says the only expectations are to “embrace all things Flavortown and dress like Guy Fieri.” He also urges those in attendance to drink a lot of beer and tip their bartenders. FieriCon is free to attend and open to the public. For more information, you can email Holcomb at [email protected]. Frost those tips, Milwaukee. FieriCon is coming and it’s going to be “off the hook.”