Milwaukee has no shortage of local beer. With the abundance of breweries in town, the Brew City moniker is well-deserved. So with the sheer volume of suds produced within the city limits, it was an interesting decision for restauranteur Tim Thompson to center the concept (and even base the name) of his new riverfront bar and restaurant in downtown Milwaukee on a brewery based in Madison. But to Thompson, it made perfect sense.

Ale Asylum Riverhouse—which opens to the public Monday, December 22—is Thompson’s fifth restaurant, but his first outside of the Madison area. He happened upon the property at 1110 N. Old World Third Street (the former site of Molly Cool’s Seafood) while helping a manager of one of his restaurants scout potential locations. He was taken by the size of the space and its proximity to the water, but knew a “call to action” was necessary to properly utilize the site. After some thought, he approached his friends who own Ale Asylum with an idea to help increase the Madison brewery’s footprint in Milwaukee.

“I just kind of put two and two together,” Thompson says. “In Milwaukee, it wouldn’t come with some of the negatives that it would in Madison, where there are already hundreds of places—literally hundreds—that have Ale Asylum on draft. That might cause some bad feelings with some people there who carry it. I was thrilled when they were interested.”

Thompson is quick to stress Ale Asylum Brewery has absolutely no ownership stake in the Riverhouse that shares its name, yet it has ample representation in the bar and restaurant. At least a dozen Ale Asylum beers will be on tap at any given time, retail six-packs will be sold on site (until 9 p.m.), and growlers will soon be available. In addition to traditional ways to incorporate Ale Asylum branding into his restaurant, Thompson also intends to utilize beer in the preparation of 10 to 12 food items, including braising meat with stouts, porters, and brown ales, using beer as the primary ingredient of a mussel dish, and “low-hanging fruit” like beer batter for fish and appetizers.

“We’re really trying to do our own thing,” Thompson says. “Will there be an item here that’s on anyone else’s menu? I would say that’s virtually certain to not be the case. Everything is going to be our own take on traditional pub food.”

The menu has yet to be finalized, but one example of the Riverhouse take on traditional pub fare the owner offered is Crab Rangoon Nachos, which will be made with local goat cheese, jumbo lump crab meat, and Asian slaw atop a bed of wonton chips. In addition to cuisine and the wealth of beer, Ale Asylum Riverhouse will have an extensive wine list, some “spirit-forward” house cocktails, five Old Fashioned (rotated seasonally), and barrel aged gin.

While there’s an entirely new menu, and a thematic overhaul was executed between tenants, Thompson says there haven’t been many changes to the Molly Cool’s interior, save for cosmetic updates to fixtures, flooring, new tables and chairs, new wall décor, replacing the tops of both bars, and bringing in a smoker to smoke meats in house.

“The facility was not the issue,” Thompson says. “It’s a beautiful location in a beautiful space that’s close to a lot of great things. I think it’s laid out in a very interesting way.”

The layout of the 7,769 square foot restaurant (approximately 5,000 of that usable front-of-house space) features two bars, seating for about 180 people, and two outdoor patios—which will bump up those seating numbers in warmer months. Thompson also considers the restaurant’s proximity to other Third Street bars, Turner Hall, and the Bradley Center to be “unbelievable assets” to his new business’ success. And no, he’s not worried about any backlash from stubborn locals determined to only drink Milwaukee beer.

“It’s not a concern of mine. I think that those people exist, but I think today’s beer consumer is becoming increasingly savvy about what it is they want to get out of their beer-drinking experience,” Thompson says. “What I love most about Ale Asylum is they aren’t like anybody else. Do they need our help? I don’t know. But I’m excited to offer some value to them because they’re great guys, great friends, and I believe in what they do.” 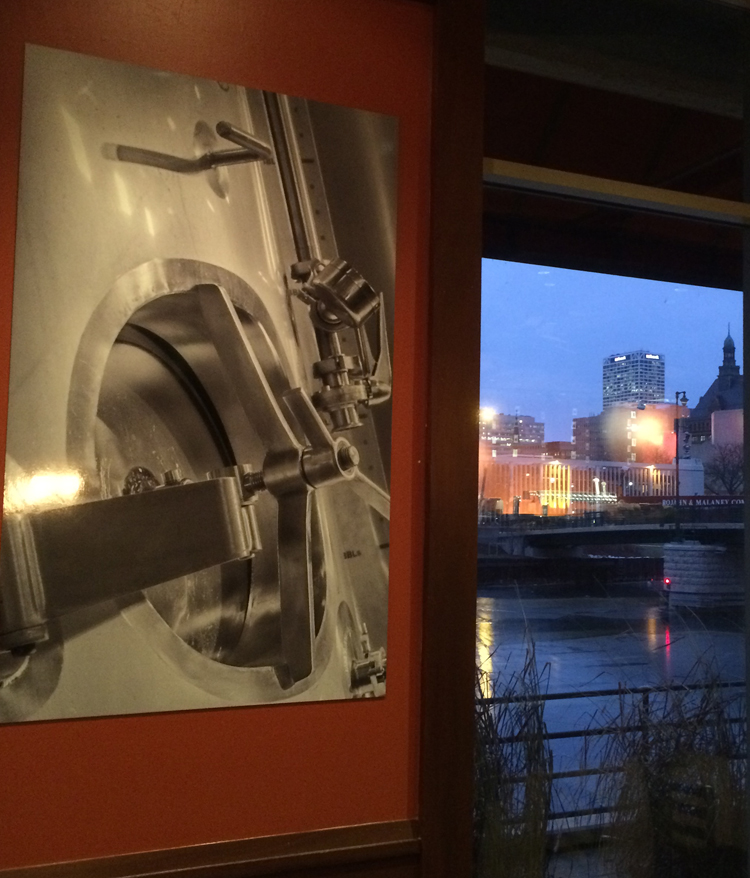