Caleb Westphal hasn’t missed a Friday fish fry since 2013. Follow along with his never-ending adventures here. This week: Butler Inn.

The Butler Inn (12400 W. Hampton Ave., 262-783-5899) caught fire late on Saturday, August 2, 1980. The three-story building had 16 single-room apartments on its second and third floors, which 12 workers from the nearby railroad yard lived in, and the first floor was a bar and grill. Five fire departments responded to the blaze. Eight people in the bar were alerted a fire was raging above them and made it out safely. On the second floor, a tenant crawled out his window and climbed down a fire escape. On the third floor, a man woke up, opened the door to the hallway, was chased back into his room by flames, and jumped out of his window, landing face down on top of a car. He suffered second and third degree burns and was critically injured, but survived, as did everyone else in the building. 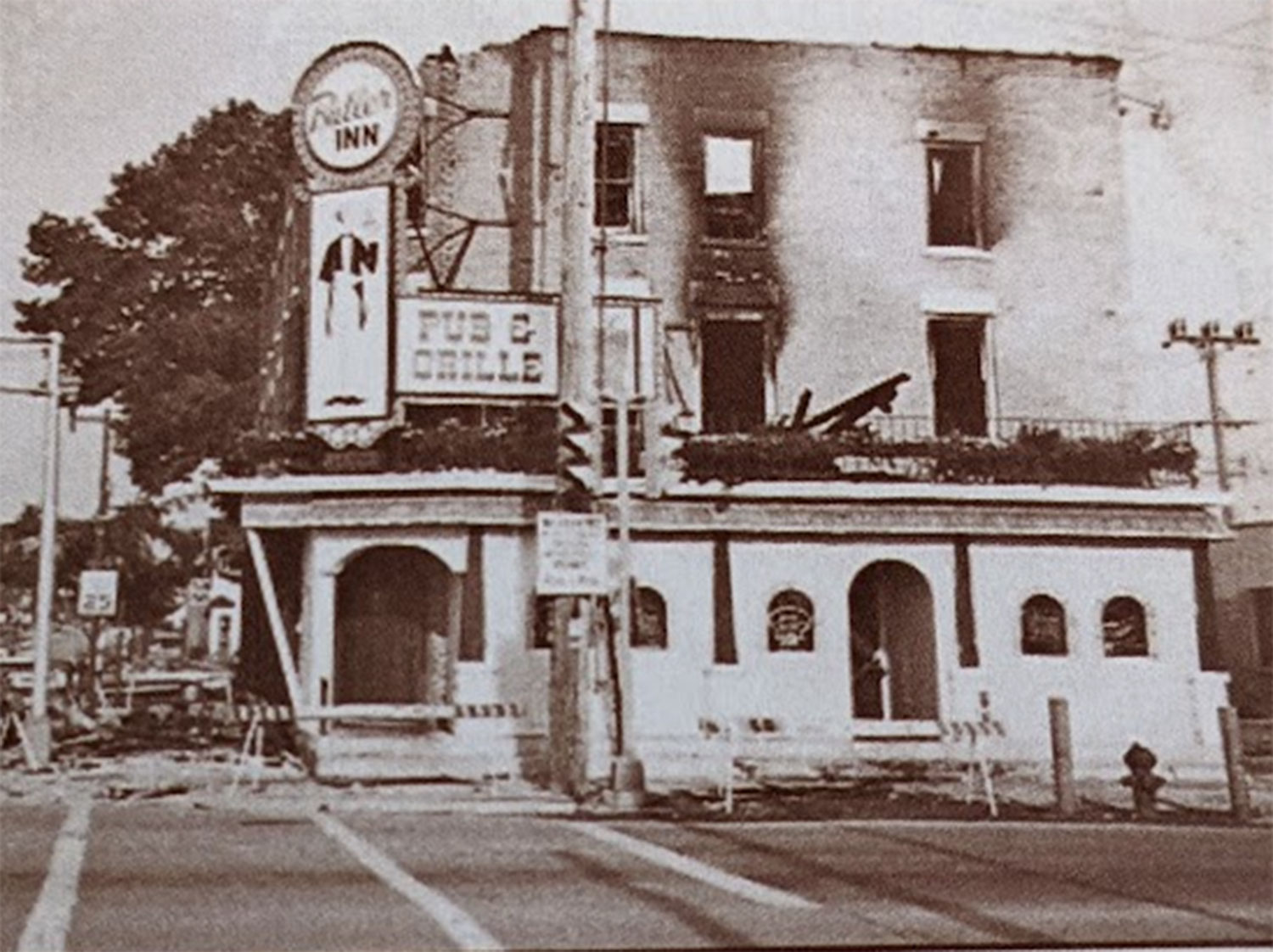 Fires are traumatic. They sear into our minds and the stench of their smoke stays in our nostrils long after they are put out. One of my earliest memories is of driving into Fond du Lac following my third birthday party in March of 1989 and watching the West’s Ice and Cold Storage Company building burn. Just over 19 years later, as the sun rose on Friday the 13th of June, the house I had that birthday party in—the house I grew up in—exploded and burned to the ground. Although I wasn’t there when it happened—nor was anyone, thankfully—I arrived shortly afterwards, and frantically paced around the rubble in the morning sun, breathing in the acrid odor of my melted memories.

Rebuilding both physically and mentally after such horrors is fundamental for recovery. Part of my own recovery was continuing on a path of realization that the most meaningful treasures are the memories we hold in our hearts, that family, friends, and community are worth more than anything we own, and what tears us apart can make us stronger with time. When I opened my car door in the parking lot of the Butler Inn shortly after 4:30pm this past Friday, it was evident they had done some rebuilding too. For it wasn’t a lingering acrid odor that filled the air, but the appetizing smell of fried fish. 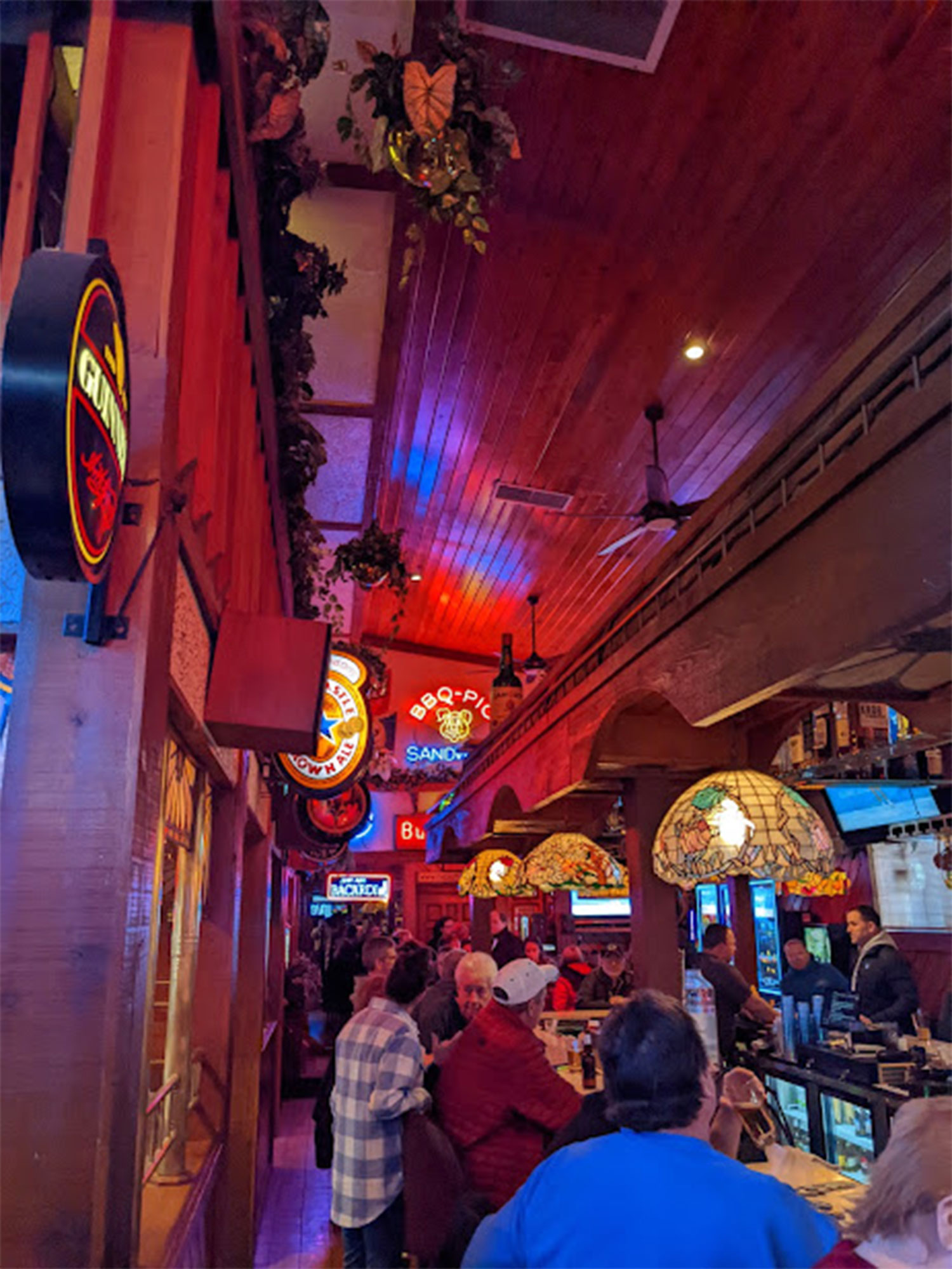 While the barroom was already rather full and jovial, the adjacent dining room, which has about fifteen tables, was nearly empty. I was given a seat and a menu, and after I started paging through it was immediately told, “Oh, the fish fry menu is on the front.” Does this mean that nothing besides fish is available on Fridays? Or do I just look like I want a fish fry? I didn’t ask, but turned to the front page. Choices listed were deep fried cod ($12.75), baked cod ($12.75), lake perch ($15.75), pan fried or beer battered walleye ($17), parmesan crusted walleye ($17.50), and grilled or Cajun salmon ($18). A choice of french fries, potato pancakes, or rice comes with each.

This year I’ve been trying to eat fish besides cod every once in a while, so when my server recommended the walleye, I decided to order it beer battered. I picked potato pancakes to go with it. While New England Clam Chowder was on the menu, it’s not everyday that it’s listed alongside “Chef’s Specialty Cajun Turtle Soup.” So even when my server told me that the soup was very spicy and could be mixed with the chowder to cut its bite, I still decided to diverge from my well-worn ways and order the Cajun turtle on its own. (I later looked at what OnMilwaukee had written about the Butler Inn fish fry, and surprisingly, the walleye was recommended to them and they also mentioned the mixing of chowder and turtle soup. I wonder if everyone gets the same recommendation or if we had the same server.) 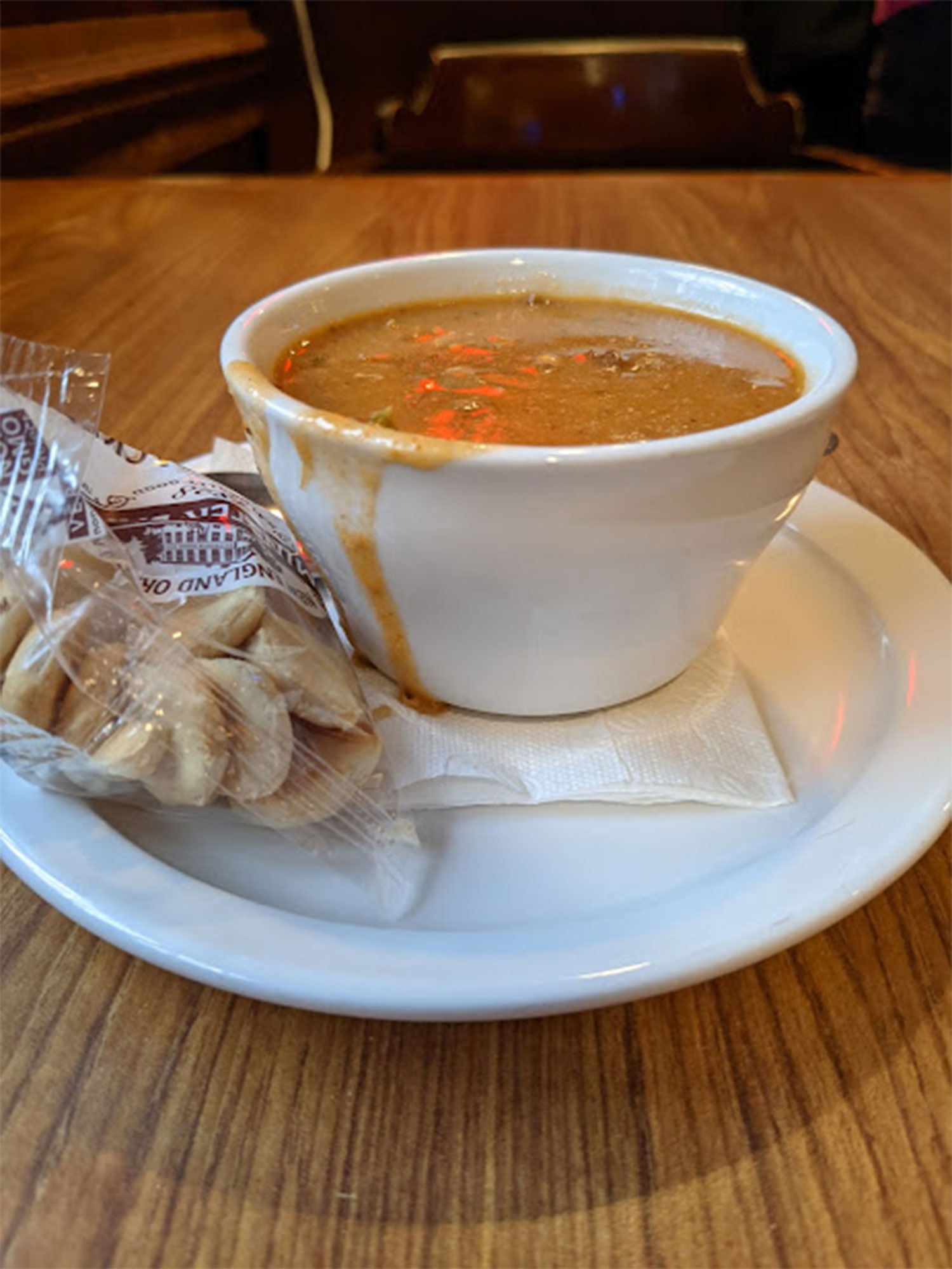 A Brandy Old Fashioned Sweet—light, refreshing, and non-muddled, with a cherry and orange garnish—arrived before any food, but in only a few minutes I had the Cajun turtle soup in front of me. Made with real turtle, it also had greens (what looked to be spinach) and some celery. More than anything, it was characterized by its spicy, dark broth. Was it tasty? Yes. Do I have any frame of reference for turtle soup? No. Would I probably have enjoyed the chowder more? Most likely, yes. Still, I have no regrets. 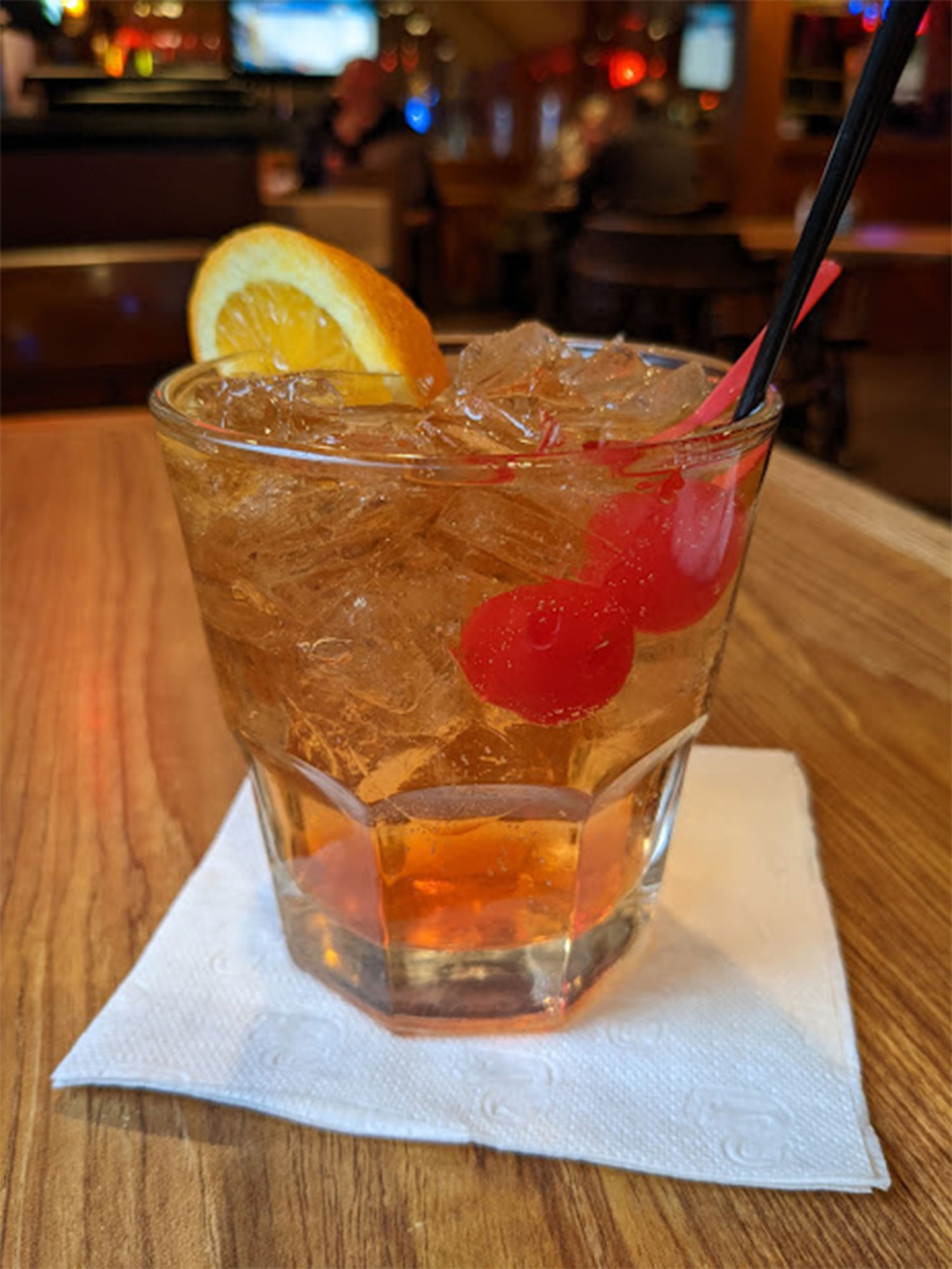 The fish fry followed the soup by about 10 minutes. Middle-of-the-road marbled rye and reasonably crunchy coleslaw in a piquant dressing were on the plate’s edge. It wasn’t until I was driving home and dictating my meal into my phone that I realized I had been given french fries instead of potato pancakes. I wasn’t even mad about it, just amused that I hadn’t realized it while I was at the restaurant. Maybe I hadn’t noticed because I had fries last week, or maybe it was because these fries were quite pleasing.

The meal’s centerpiece was its large walleye fillet. Juicy and packed with a wallop of walleye flavor, it was coated with a buttery, salty, sweet, and beer-flavored batter. The coating was crispy enough to contrast well with the juiciness of the fish. The tartar appeared to be overpowered with dill, but on closer examination, it not only was packed with dill, but with relish too. For once the mayo base took the backseat and the greens fought up front to be the driver. 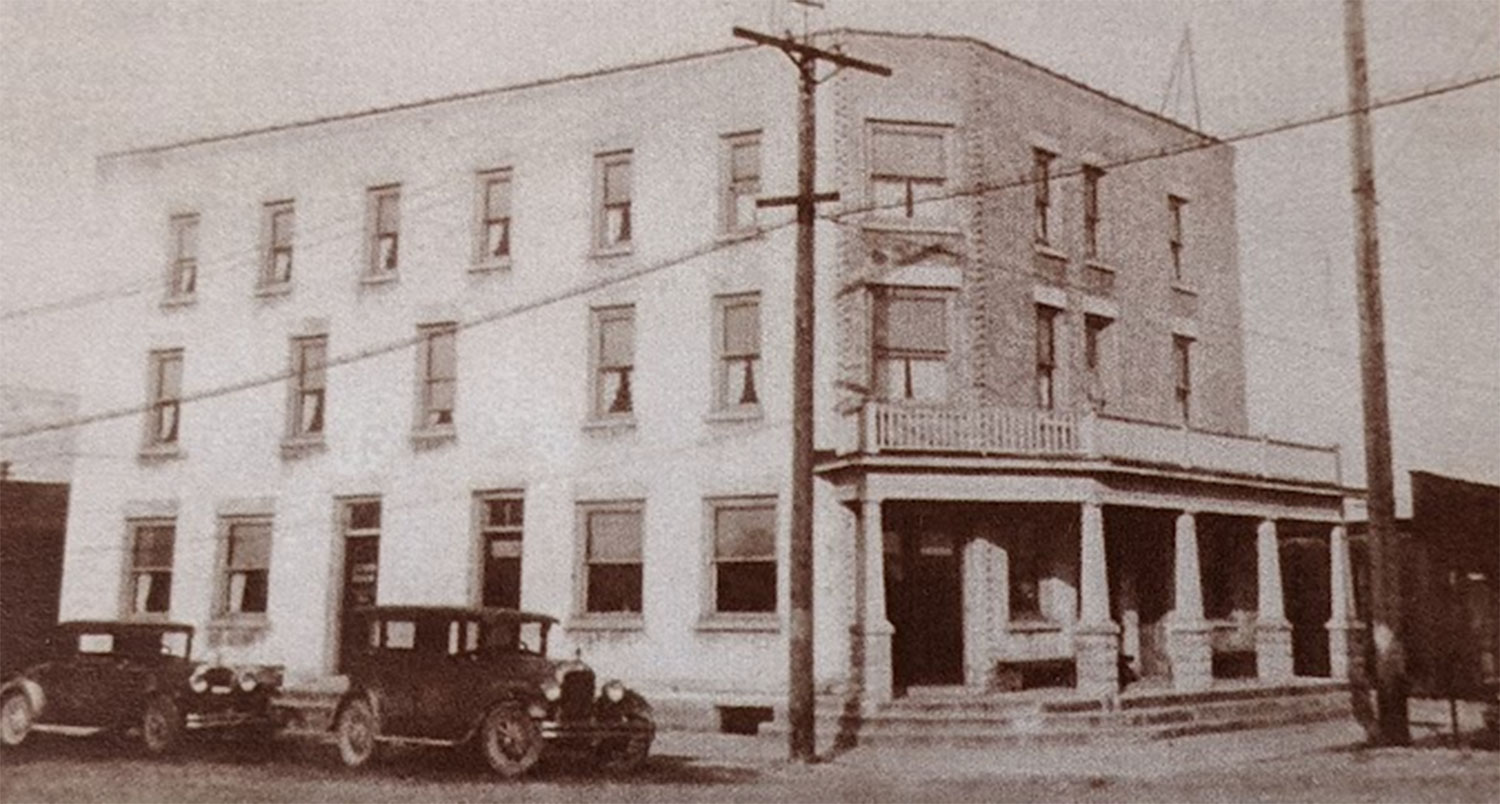 The Butler Inn started out as the Hotel Hampton in 1912. It became the New Butler Hotel and then Butler Hotel, and has been serving food at least since the early 1930s, when Sunday chicken dinners were available for 50 cents. It has been the Butler Inn since about 1976, but the building it now calls home was built after a 1980 fire. However you are rebuilding, whether it be rebuilding physical structures or rebuilding from mental trauma, may loved ones be at your side and the smell of a fish fry arrive whenever you open your car door.

Special Note: Next Friday is Friday Fish Fry Day. Get ready, and watch for more details about this year’s celebration coming soon! 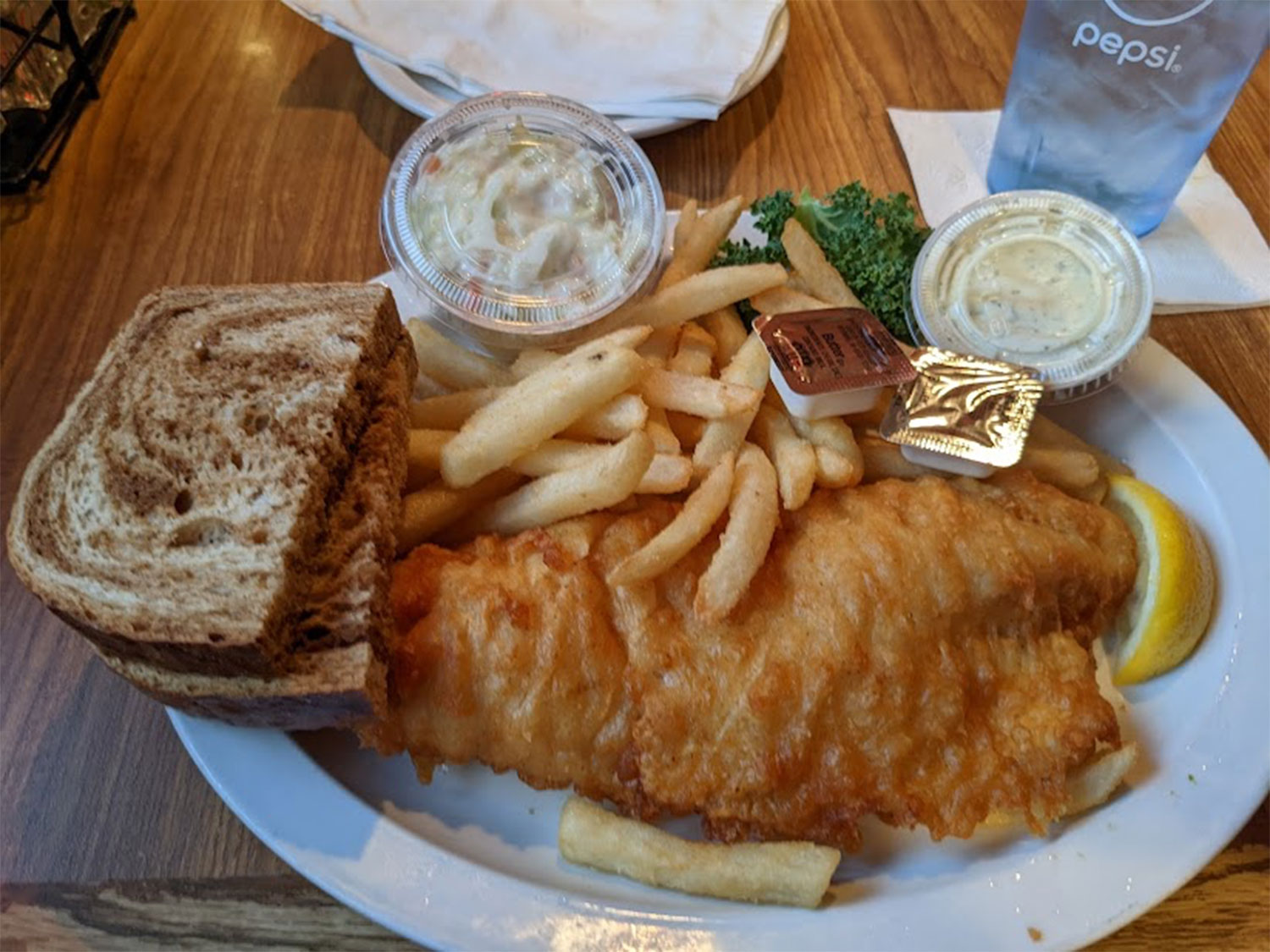