More often than not there is a randomness to where I end up for fish on a Friday night. Sometimes I get an idea for a place halfway through the week, but sometimes it isn’t until a half an hour before heading out the door that I know where I’m going. At some point during the lead up to Friday, a friend of mine drove past the Silver Spring House (6655 N. Green Bay Ave., 414-352-3920) and sent me a text with a picture of the building saying it looked like it might be a good place to go. That was enough for me to decide to check it out. Most of the time you just have to embrace the randomness and let it take you where it will.

The first thing I noticed when I entered was the detailed woodwork covering every part of the building: the back bar and bar, the trimming of the walls, the dividers between booths, the tables and chairs themselves. As ornate as the woodwork is, it has a rustic quality to it as well. It’s obvious that there is some history behind the building just by looking with an untrained eye. It turns out there has been some form of establishment on the property since 1856. By 1904, the first Silver Spring House was started, and the back dining room where I ate was this original building. The bar and main dining area in front was originally a dance hall that was on another part of the property, and it was rolled on logs to its current location in 1915. In the 1920s, taxi dancing, where dancers were rented out for 10 cents a dance, had a brief whirl there. In the 1930s and 1940s one could purchase a Friday night fish fry there for 15 cents, and from that time until 1976 it was called the Park Tavern. Then the name went back to being the Silver Spring House; in 1985 it became a Milwaukee County landmark.

I ordered the obligatory Brandy Old Fashioned Sweet at the bar while waiting for some friends, and after their arrival we were quickly seated. Prefacing a fish fry with clam chowder is by now a ritual, and I found this week’s to have a thickness to it that was almost gravy-like. It was still pretty good and came with a piece of rye bread. There was a lot to choose from on the fish menu: perch; bluegill; poor man’s lobster; AYCE cod; and a Catch Of The Day, which may be something different on any given Friday. As seems to be the norm when given the option, I went with the AYCE. 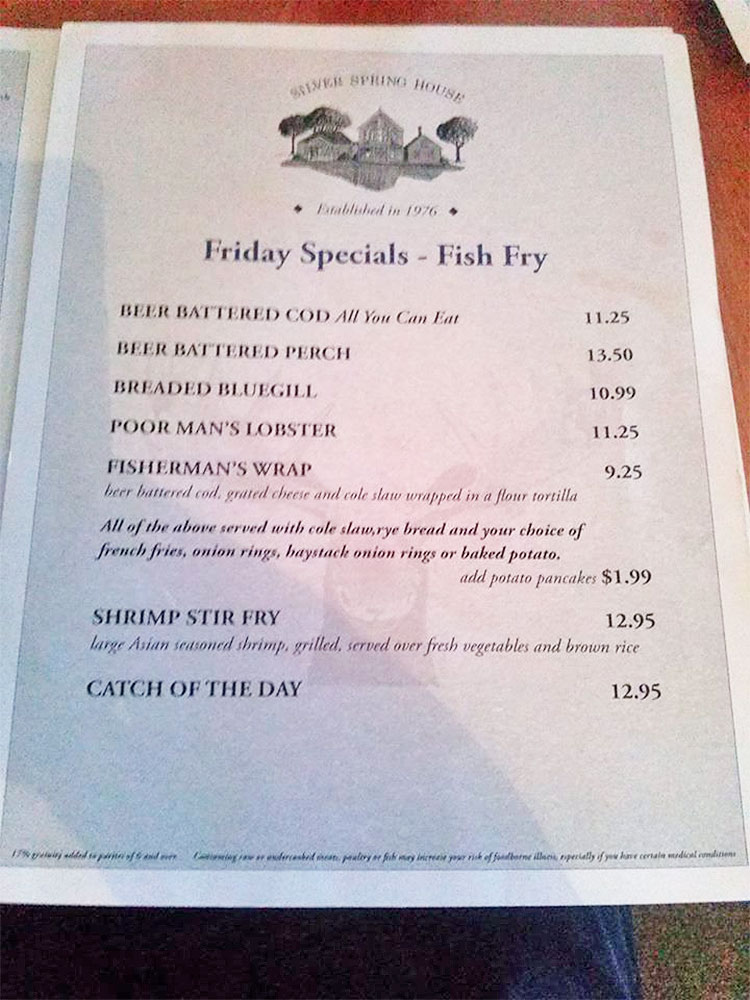 I was impressed with the fish. It wouldn’t win any contests, but there was a consistency to all the pieces, and I ordered a second round as soon as I got the chance. The tartar sauce was above average as well. The potato pancakes were reminiscent of some that I had at Schwabenhof about a month ago—they had a soft uniform texture, nothing like the more hash brown-like ones of some recent weeks. I’m impartial to their style, as long as the’’re enjoyable overall. The one thing that I thought could have been improved was the coleslaw. It really didn’t do it for me. Besides not being too enthralled with the slaw, I should also note that it seemed to take forever for the clam chowder to arrive, and then forever for the fish to arrive. This was not because the staff was not working hard, though. Our waiter seemed to be running nonstop between the tables in the back room; there was just so much to take care of. Nonetheless, it really lessened the experience.

The design and history of the building is enough to draw you in, and the food is good enough to make you want to come back. I saw old and young, friends and families all eating there, and I got the feeling some people eat there quite regularly. If I didn’t have such a fish fry wanderlust, I don’t think it would be that hard to saunter up to the bar on a regular basis and feel like a part of the history. I would sip brandy and let my mind drift back nearly a century to imagine taxi dances and 15-cent fish, as my impending meal would waft to my senses and a moose head would gaze down to me from the woodwork overhead.

Rating: History in the walls of each room, solid AYCE, variety of fish options. 3.5 out of 5 stars. 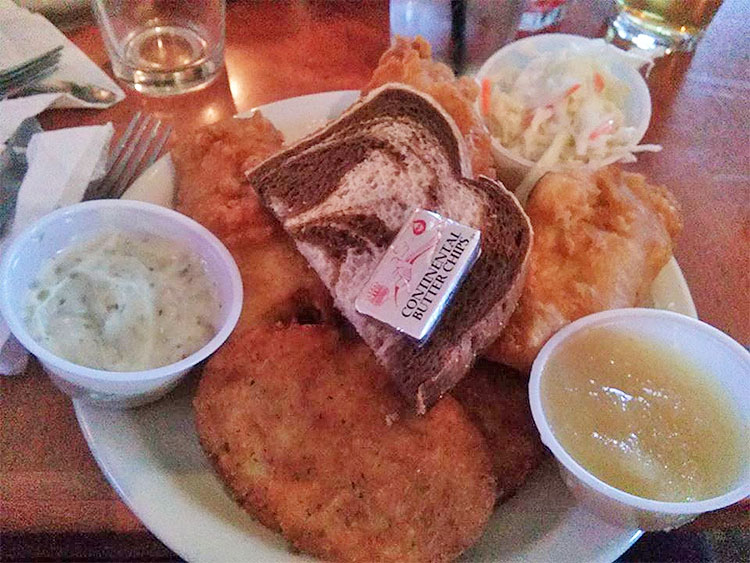