One of the first things that struck me about The Flagmakers is just how much the film looks like Milwaukee.

In scenes with people driving around or taking their kids to a playground or going to Pick ‘n Save or getting on the bus, it all just looks like the place where I live. The film really captures Milwaukee County from a visual standpoint. The color of the sky looks familiar. The houses look like the homes of people I know. I audibly groaned watching people brush snow off their cars in the winter. I know this place well.

The Flagmakers is not a film that is specifically about Milwaukee, but it is a deeply Milwaukee story. The film is phenomenal. And its portrayal of Milwaukee is something we should be proud of in this city and region.

Produced by National Geographic, The Flagmakers was released in late December to wide acclaim (it’s currently streaming on Disney+). It has made the shortlist to be nominated for an Academy Award. It is being optioned as a Broadway musical. And none other than Giannis Antetokounmpo signed on to be an executive producer.

At Eder Flag, refugees and immigrants, who have risked everything to come to the USA, work alongside their midwestern colleagues to stitch and sew 5 million American flags a year.

THE FLAGMAKERS is now streaming on @DisneyPlus pic.twitter.com/7x3lzasLPP

The film is a 35-minute documentary short about the people who work at Eder Flag, the Oak Creek-based company that is the single largest manufacturer of flags and flagpoles in the nation. About five million flags are made here every year, including the flag that flies at the Statue of Liberty.

Many of the people who work there are immigrants and refugees. There is an inherent paradox to the reality of a group of immigrants making American flags during a time of such pervasive anti-immigrant sentiment in the country, and at a time when the symbolism of the American flag has taken on an almost divisive tone. That is what award-winning directors Cynthia Wade and Sharon Liese wanted to explore when they set out to make this documentary in the summer of 2019.

“We were feeling, before we really jumped into this film, like the American flag had been co-opted,” Wade says in an interview with Milwaukee Record. “(It) had really been pulled into one very narrow, very conservative, very inflexible—in my opinion—place where you had to stand, but there’s no place to sort of say, ‘I love this country and yet sometimes it breaks my heart. I love this country, but we have a problem with racism. I love this country, but there’s great inequality, still.’ There’s wonderful, amazing opportunities; this is the best, most extraordinary democratic experiment in the history of mankind in the world. And yet it can break your heart. Both things should be true. We should be allowed to live in a gray area where we can say those things and not be branded as unpatriotic. And so what I loved about following Midwestern stories is that it gave, I think, a more holistic picture, a more 360-degree experience for the audience about what our relationship is with not only the flag, but with the nation.”

While the film in large part focuses on the experiences of immigrants and refugees—one montage includes someone who left Puerto Rico after a hurricane, someone who lived in a refugee camp in Tanzania, and someone who was a prisoner of war in Bosnia—it also shows people from here in Milwaukee, ranging from a Black man who chooses not to fly an American flag at his home to a white woman with Trump campaign signs in her front yard.

“When you think about Eder Flag, it’s so representative of the country,” Wade says. “It was really important for us not only to profile the experience of recent immigrants or refugees, but people that were born and raised in Milwaukee.”

There’s an element of this film that taps into these experiences at Eder Flag as a microcosm of what’s happening across the nation.

“I think Wisconsin is the heart of the country,” Wade says. “So goes Wisconsin, so goes the nation. It’s one of the reasons that we proactively decided this is the place we want to start the film.”

The film ended up being shot over the course of three years, from 2019 to 2022, which means it was also shot during an especially tumultuous time in America and in southeastern Wisconsin: the COVID-19 pandemic, the police murder of George Floyd, the Jacob Blake shooting and the riots in Kenosha, the 2020 presidential election, the January 6 insurrection. All of it weaves in and out of the story being told about the people at Eder Flag.

“We were so worried about what the fate of the film would be when the pandemic hit,” Liese says. “And then we realized as time went on that the pandemic allowed us to slow down, and realized that we do need to be more patient and that this film is going to take some time. And then we were able to see these events unfold and see them through the eyes of the flag makers. So we were really fortunate. There were many times [Cynthia] and I were like, ‘I can’t believe we’re actually in Milwaukee right now; all this is going on and the eyes of the country are on the city.'”

Milwaukee, says Wade, became “a character in the story very much the way the flag is a character.”

The filmmakers ended up spending a lot of time in Milwaukee; for many of the trips here, it involved Wade and Liese quarantining for two weeks at an AirBnb before being able to film at Eder Flag. That also required them to get creative about how to shoot the film—offsite, outside, etc.—and really experience the city and region.

“[Milwaukee] is so diverse,” Liese says. “It’s more diverse than I would have ever have imagined. And that shows up in everything—in the way that people talk about things, the way people see things, the food that we ate…and just sort of a warmth and authenticity that was really endearing.” 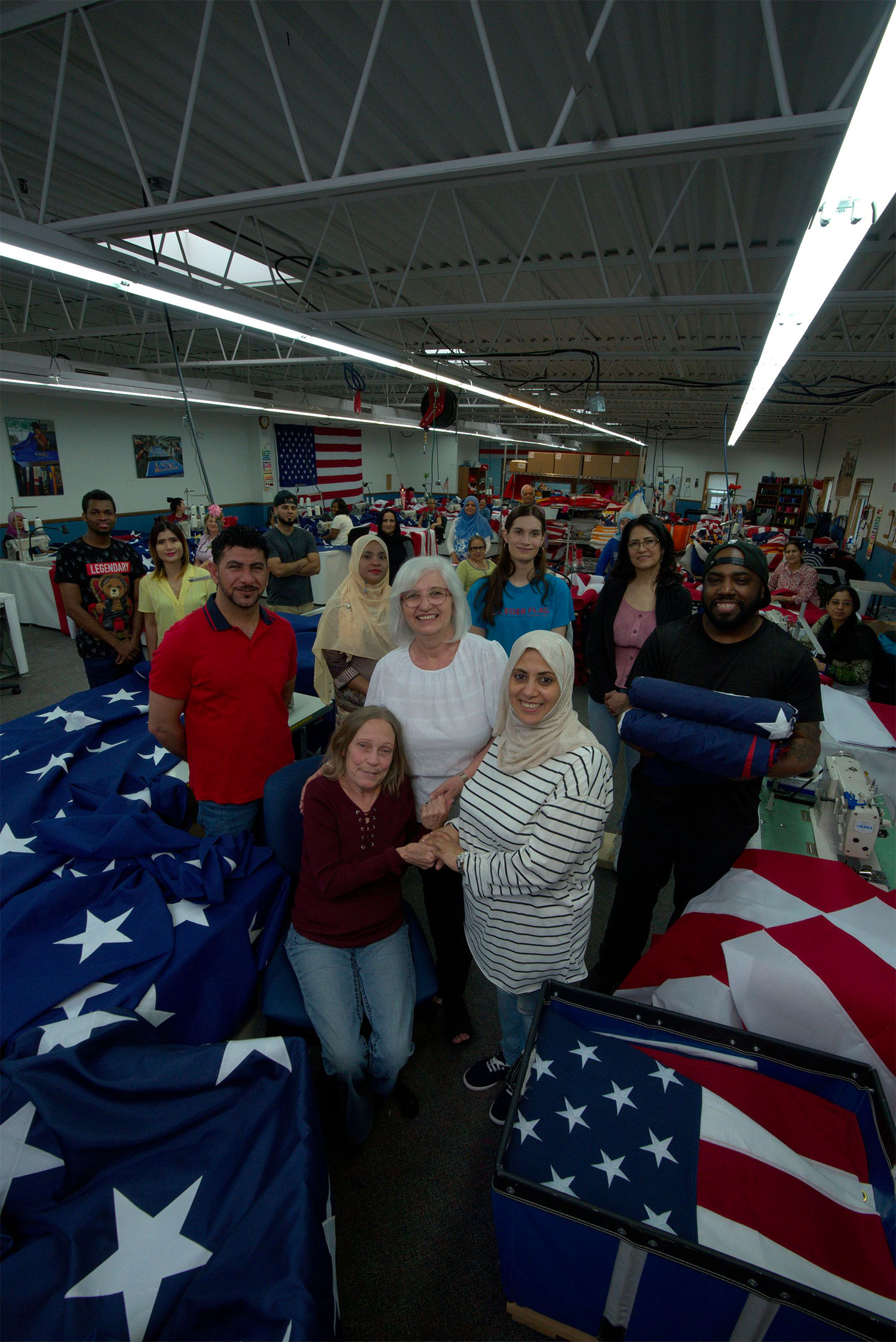 One of the people from Milwaukee who really made an impact in this film is a Black man named SugarRay Kayde, who is the production manager for the flagpole side of the business. One scene follows him on a drive to work, and he says this:

But, as he later explains, “We definitely love this country, but it don’t always love you back.” At one point in the film, he became emotional talking about the “state of the country, with George Floyd and Jacob Blake.” It’s one of the most powerful moments of the documentary.

Kayde talked with us about the film, and about that moment.

“For me, I had been really spending a lot of that time protecting my family and being strong for them,” he says. “I hadn’t really taken the time to really reflect on any of that stuff that was going on in the country until that interview. And once I really thought about it, I kind of got swept over with emotion. It was a lot going on and really a lot to deal with, when I actually sat down and thought about it.”

Kayde has been part of the promotional screenings of the film, and has had the opportunity to travel to New York, San Francisco, and Los Angeles.

He’s been at Eder Flag for nearly seven years, working his way up from a temp job to a supervisory role, where he’s now been for more than five years. He’s proud to be working there and said there was a lot of excitement around the documentary within the company. He also said it sheds light on something larger about the people who work at Eder Flag.

“There are people from all over the world who are part of this company, and who are the people who produce that flag,” he says. “A lot of them are in this country because they wanted to come here for an opportunity at a better life. They may have been running from something in their country, some sort of tragedy, or some hardship in their country, and they come to America looking for that opportunity.”

In almost every scene where he appears in the film, Kayde is wearing Milwaukee Bucks gear. He’s a huge fan of the team. Once he found out Giannis Antetokounmpo would be involved with the film, he was blown away.

“Giannis and his people saw the movie and he felt so strongly about it that he actually wanted to attach his name to it, right? He actually wanted to come on as executive producer,” Kayde says. “Listen, man, when you hear that—being the biggest of Bucks fans, and loving Milwaukee the way I do, and having love and respect for Giannis not only as a basketball player, but as a person and as a family man—it was mind blowing.”

Says Liese, “SugarRay is just beside himself about Giannis being associated with the film.”

Antetokounmpo got involved, Wade said, after National Geographic, which is owned by Disney, began to take notice and wanted to pick up the film. Because Giannis had a biopic on Disney+ (Rise), he was shown an early cut of the film.

“Because he’s from Milwaukee, and because of his background as a Greek Nigerian immigrant, there was a perfect kind of marriage in terms of him coming on and being able to speak about his own experience as an immigrant,” Liese says.

“We got a ton of heart here,” Kayde says of Milwaukee. “A ton of character. People really are passionate about being from Milwaukee. Even the people who arrive in Milwaukee that aren’t originally from here, once you get to Milwaukee and you get embraced by the community, it’s a lot of love. It’s a lot of love. And it’s not perfect. We have situations that we had to deal with, especially as Black and Brown people or people from other countries, but ultimately people, they embrace you. Just like at Eder Flag. Once you join and become a part of the family at Eder, everybody embraces you. And I feel like Milwaukee is that same way. So I hope that a light gets shined about the type of place Milwaukee is to be and to live and to grow up. And again, it’s not perfect. But I wouldn’t rather be in any other place.” 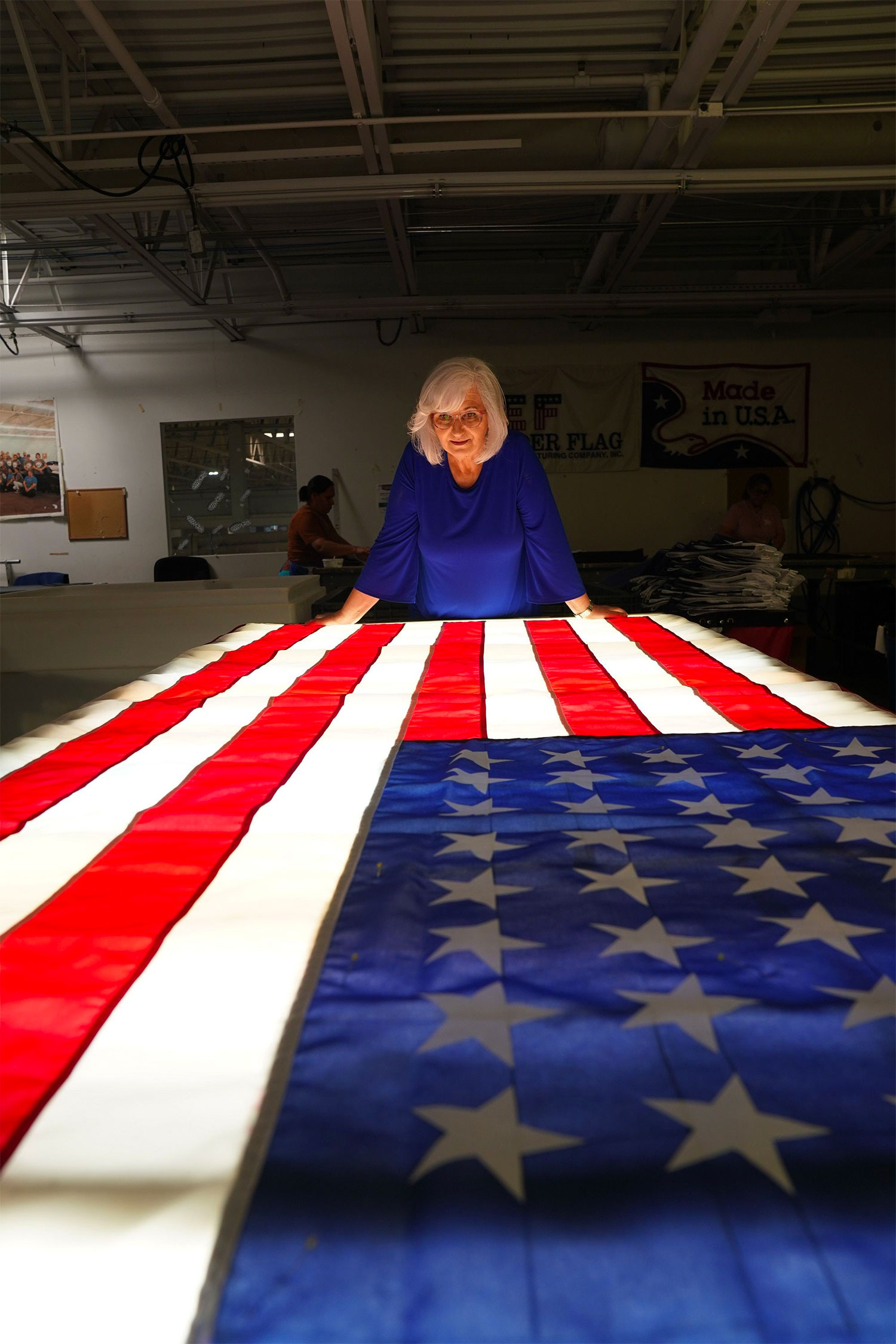