In 1984, Rita Landis went to a ComedySportz show and vowed she’d one day be on stage. Thirty years later, she did. Now 54, the longtime comedy fan has taken the steps to make her improv aspirations a reality. Since 2014, Landis has worked her way up the ladder to reach ComedySportz’s minor league ranks, then the pros. Along the way, the Bay View improviser has delved into the world of stand-up.

On July 31, Landis will take on yet another unfamiliar artistic avenue when she partakes in Milwaukee Record‘s 3rd annual Roast Of Milwaukee. Before taking her town to task, we spoke to Landis about her belated beginning in improv, how she seeks unfamiliar characters, and what she plans to focus on at the Roast.

Milwaukee Record: How did you get your start in improv? And when did you get involved with ComedySportz?

Rita Landis: First of all, when ComedySportz started back in 1984, I saw them then. All my life I wanted to be at ComedySportz. I’ve been up on stage with them maybe five times in my life, and I always wanted to take the classes, but I didn’t have the money or the time or it didn’t occur to me. then in 2014, I had a cousin come here form out of town, so we went to a show at ComedySportz and I thought “Okay, that’s it! I’m going to take the classes and I’m going to start doing it.”

I took the workshops. After the 103 workshop, they pick people to go into the minor leagues, and it’s just like the minor leagues of baseball. You have to go there before you get into the pros at ComedySportz. They picked me as one of four or five people out of our group of 32. I started doing improv with them on a weekly basis, and then I had my first professional show in November of 2015. I’m relatively new, but it’s something I’ve always wanted to do and it’s such a privilege to be able to do it.

MR: That was more than 30 years from the impetus of you wanting to do it to when you actually did it. Once you got going, did you look back and wonder why you waited so long?

RL: I wasted a lot of time. You know, when you see people up there doing it, you’re like “I can’t do that!” But I know every time I went up on stage, I did well and walked away knowing I wanted to do it. I could’ve been doing it back then. Then again, when you’re older, you have a little more life experience to draw from as you go along. I’m going to be 55 in September, so I started really late to all of this. Even though I started late, I’m going to make up for lost time.

MR: Because of your age, do you feel like you may be limited in the characters you have? Like, do you feel you have to be the mom or the authority figure on stage or does your age make you not give a shit about anything, allowing you to take more risks in scenes?


RL: The thing is with improv, you can be anyone at any time. There are guys taking on female roles. Sometimes you’re a grandma. Sometimes you’re a little kid. It’s what the scene needs at the time. Mostly, improv groups are very accepting and there aren’t barriers or stereotypes. It’s a very welcoming community. We’re just people. I don’t see age or color or orientation or anything like that. We just do what’s best for the scene. I’ve never found my age to be inhibiting for me. The only problem is, you know, I’ve got a bad back.

MR: I know your roles change every show and every night. Sometimes you’re the main attraction and sometimes you’re helping to prop up someone else, but if you had to distill your essence on stage, what do you envision your style to be? 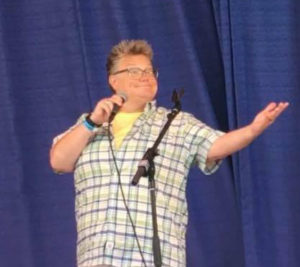 RL: I’m a person who enjoys being the center of attention and I’m kind of loud. I tend to take on the role of authority figure and I do a lot of old men that are yelling at you. It’s stronger characters, but I try to push myself to get out of my comfort zone and take on characters that aren’t as strong. But that’s basically where I end up a lot of times.

MR: Since getting brought up to the minor leagues in 2015, how do you feel you’ve improved as an improviser? Or have you even? Was it maybe a thing where you had all the tools, but you’re finally getting a better handle on how to use them?

RL: I’ll be learning until I drop over. With improv, you’re continually learning and growing because you can add to your repertoire of characters, of accents, of style of play, all sorts of things. We’ve got those experienced players to guide us as we hone our craft. A lot of the people that are with me in minors are younger, and it takes a while to learn how to do it. I’m learning right along with everyone else, and I think most improvisers would say you never stop learning. It’s fun to stretch yourself beyond your comfort zone and really work those muscles.

MR: Speaking of working out of your comfort zone, you’re going to be performing a stand-up set with new material for our Roast Of Milwaukee event. Are you going to use your training to improvise or will you be revising or adding to existing material?

RL: I’ve been in Bay View for over 25 years, so it’s going to be Bay View-centered and Ive done some of that before. A lot of my stand-up is true stories of things that have happened to me before that I tie together for a set.

MR: What would you say to people who want to try comedy but think it might be too late for them?

RL: I’m telling you it’s not too late. Do it. Fear of public speaking is the biggest fear in the world. If you want to get more comfortable with that and more comfortable with yourself, take ComedySportz Workshop 101 because you’ll be able to hone those skills in a totally supportive environment. Nobody is going to be mean to you. You are welcome to fail, and you’ll be supported. It’s never too late. Also, I wanted this long to do stand-up. I always thought I’d do it eventually, and once I did it, so many people were so supportive. Just get up there and do it. What do you have to lose? What’s the worst that could happen?

Rita Landis will perform at Club Garibaldi on Monday, July 31 as part of “The Roast Of Milwaukee.” The show costs $3 at the door or free with a non-perishable food or toiletry donation for Milwaukee Women’s Center.