Last November, Los Angeles (by way of Elm grove, Wisconsin) comedian Charlie Berens told us how his Badger State background informed his comedy. At the time of that interview, Berens’ Wisconsin-themed Titanic, Batman, and Making A Murder parody videos had amassed millions of views, while helping to build his name—especially in his home state.

Berens returned to the well of Wisconsin-focused funniness in January when he put on a camouflage jacket and took a seat in front of a camera to deliver the inaugural Manitowoc Minute. In late June, the video series went weekly, and it quickly found a sizable and devoted viewership on Facebook and YouTube. Shortly after his recent visit to Wisconsin (which, yes, included a stop in Manitowoc), Milwaukee Record caught up with Berens and asked the comic about his latest idea’s origin, the challenges that come with producing a weekly segment, whether we worries his broad Wisconsin character may be taken the wrong way, and how he plans to “keep ‘er moving” from here on out.

Milwaukee Record: Last year, you made a mark in Wisconsin and beyond with your Titanic parody video. Since then, you’ve followed it up with Manitowoc Minute. How did that idea come about?

Charlie Berens: Similar to the Titanic parody video, the Manitowoc Minute was inspired by one of my stand up bits. I have a character based off my time in local news, where they prefer a neutral accent. I worked in news in Dallas, South Carolina, Washington D.C., and L.A. What stayed consistent were the words I didn’t say right because of my accent.

MR: You’re from Elm Grove, right? So why Manitowoc? Is it the alliteration, the awareness Making A Murderer brought the city? A little bit of each?

CB: I was on stage at the Comedy Store in L.A. and had a fun back and forth with someone in the audience. He ended up being from Manitowoc. Small world. So when it came to picking a Wisconsin city, Manitowoc was on my mind. It’s also a very Wisconsin sounding name. The awareness didn’t hurt either, but I honestly didn’t think too much about it at the time. I never expected it to get this big. I didn’t even know if I’d make a second episode.

MR: The segment is pretty much a weekly feature now, opposed to occasional voiceover videos. Has it been challenging to write, edit, and produce new material for Manitowoc Minute so often, and do you worry you’ll run out of commentary?

CB: I don’t really worry about running out of commentary. I’ve been writing comedy news for years now, so I’m fairly used to the joke writing process and quick deadlines. Once you know joke structures and laughter triggers, you can basically take your headline and start plugging away. A good trick is to force yourself to write 10 jokes per headline. They don’t have to be good. Nine times out of 10, you’ll walk away with at least one solid punchline if you force yourself to do that.

The editing and producing can be more challenging. Editing isn’t my favorite thing to do and it’s very time-consuming. But timing is everything in comedy, so the editing is also insanely important. Maybe one day I’ll find someone to help out on that end.

MR: Talk about the character. Is he just a broad northern Wisconsin stereotype or is he based on a person—or some people—you know? Is there some of you in there as well?

CB: Oh yeah, there’s a lot of me here. The character is loosely based off my time in local news, and accentuated by my experiences growing up in Wisconsin. I grew up watching public access fishing shows. I’ve been a die hard Packer fan since I was six. My dad’s side of the family is from Fond du Lac, which meant lots of time fishing on Lake Winnebago. I’ve been going up north every year since I was born. Basically, I’ve been absorbing Wisconsin nuances since day one, and now I have a platform to celebrate them.

MR: Why draw from the Wisconsin well again? Do you fear people here may take it the wrong way?

CB: I think people understand that in comedy you exaggerate and take some liberties. There was a point when I thought people would take these videos the wrong way, but it didn’t take long to see how much fun Wisconsin has laughing with and at ourselves. That’s one of the best things about this state.

As far as drawing from the Wisconsin well, there’s so much there. The more you draw, the more you find. I didn’t expect that. But after a couple months making these videos, I’m just finding more and more material.

MR: What’s the response you’ve experienced with Manitowoc Minute out in Los Angeles? Also, it appears you recently came back to Wisconsin, so what sort of feedback have you heard here? 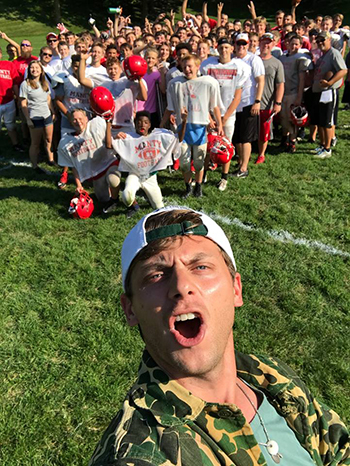 CB: There’s been a bigger response than I ever imagined outside Wisconsin. When I dive into my video analytics, there’s a surprisingly strong national appeal. Someone actually stopped me at the airport last week and asked if I was the Manitowoc Minute guy. I was like, “Oh My Gosh!” Couldn’t believe it.

The response in Wisconsin was also great. I did a meet-up at Legend Larry’s in Manitowoc. I did a short set plus some Q & A. One of the players on the Manitowoc football team asked me to drop by practice, so I did that, too. Gave a little pep talk, which went off the rails immediately. I got a chance to show the team my Hail Mary. It went 20 yards and wobbled like a duck. I wasn’t always like that. Not to brag, but I was third string quarterback in seventh grade. I should have given the Manitowoc Ships a better show. That’s okay, I’ll get it next time.

MR: Has Manitowoc Minute helped you get other opportunities or is it just a way to keep busy and continue building an audience between roles?

CB: There have been some cool offers that popped up because of it. We’ll see how those play out. I’m mostly thankful that the series found an audience. That’s been hard for me to do in the past. And really, one of the coolest parts is getting messages from people saying how much they dig the show.

MR: How are you planning to “keep ‘er moving” from here on out? What’s next for you?

CB: I’m doing more and more stand-up. I should have a Midwest tour booked soon! Beyond that, I’m going to keep re-imagining the Manitowoc Minute and seeing where I can take it. Maybe soon it will be called “Manitowoc Minutes.” You never know.