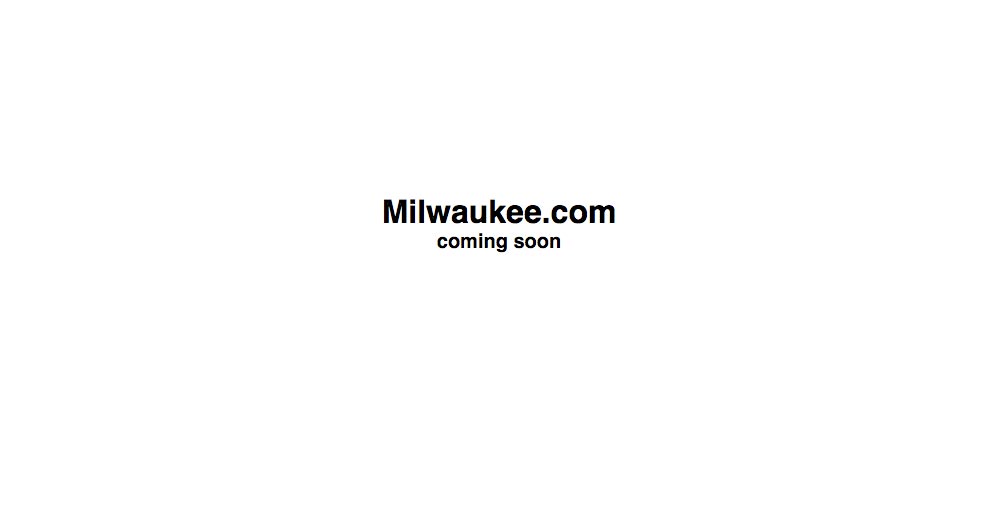 Who owns “Milwaukee.com,” and why is nothing there?

But there’s a conspicuous absence in this overflowing cornucopia of Milwaukee websites: Milwaukee.com. Type those 13 characters into the browser of your choice and you’re greeted not with a guide to the city and its amenities, its nightlife, and its Summerfest, but a blank page that says “Coming Soon.” All that’s missing is a little yellow “Under Construction” sign and links imploring visitors to either sign or view Milwaukee’s guestbook.

So what gives? Who owns Milwaukee.com, and why is there nothing there?

Turns out the domain is owned and operated (or, in this case, not operated) by a San Jose, California-based company called Boulevards New Media. Founded in 1994 by Dan Pulcrano, Boulevards is something of a Silicon Valley Borg collective for online city guides, having scooped up scores of city-name domains in the early days of the Internet. (Pulcrano still serves as CEO today, and is often described as a “giant” in world of geodomains.)

According to Boulevards’ website, it counts among its “properties” LosAngeles.com, Seattle.com, SanFrancisco.com, Denver.com, Houston.com, WashingtonDC.com, and Philadelphia.com. Boulevards operates in 23 of the nation’s top 30 markets, the website says, and is “the largest operator of city guides under high-ranking, deeply intuitive ‘cityname.com’ URLs.” A closer look reveals the company operates in 64 cities across the United States, as well as numerous cities in Canada, Mexico, South America, and the Middle East. In other words, if you live in a major or semi-major American city, chances are Boulevards has long assimilated your city’s city-name website.

It’s a good gig, too. According to a story on DomainInvesting.com, Pulcrano originally purchased Denver.com for a mere $6,250 way back in 1996. In 2012, Boulevards sold the domain to a local buyer in a “seven figure” deal. That’s a snazzy return on investment, all for being savvy enough to buy a bunch of generic domain names in the ’90s.

Similar to Milwaukee, however, there are oodles of cities among Boulevards’ holdings with nothing more than “Coming Soon” placeholders. Detroit.com, Houston.com, Minneapolis.com, Oakland.com, and more are all empty. As for cities that do have operational Boulevards sites, they’re about what you’d expect: cookie-cutter designs, lots of information about hotels, plenty of info about real estate, jumbled and spotty events calendars, restaurant listings. Original editorial content is few and far between. (Dig around on Seattle.com and you can eventually find an article on HBO’s Kurt Cobain documentary Montage Of Heck). They’re more marketing tools than city guides, “lead generators” than user-friendly websites.

Milwaukee.com appears to have gone dead recently—sometime in late August or early September of this year. Using the magic of the ol’ Wayback Machine, however, we can take a peek at how things used to be. And, well, things weren’t great. From approximately 2007 through 2015, the site’s introduction read like it was written by someone who had only visited the city via Wikipedia:

Milwaukee is notoriously thought of as a city inundated with rock music, beer and Harley production but there is much more to The City of Festivals. The largest city in Wisconsin and located on the west shore of Lake Michigan, Milwaukee has a revived downtown area alongside the Milwaukee Art Museum with new skyscrapers, luxury housing, fine dining and upscale nightlife establishments. Milwaukee also hosts the world’s largest music festival, Summerfest, and has attractions that display the cultural history of the great city. Marquette University brings in a young crowd to enjoy the city’s character and shifts the focus from Hogs and Miller Draft to business enterprises in the Fortune 500.

Beyond that, Milwaukee.com was one of those deals where venues had to list their own events, and businesses had to list themselves. Thus, the “Top Venues” included The Rave and Miramar Theatre, while the Safe House and Bryant’s were listed as popular dance clubs. Pabst/Riverside/Turner shows were listed, though most of the other events were Brewers games. 7 Mile Fair, meanwhile, popped up under “Amusement Parks.”

Not that any of the information on Milwaukee.com was wrong, necessarily, (the restaurant listings were extensive and accurate), but there was a distinct lack of voice and human touch throughout the site that left it feeling like little more than a glorified Yellow Pages. Which is too bad: Pulcrano and his company came out of the world of alt weeklies, and their original intentions to create comprehensive city guides seemed noble. But, even when dialing the Wayback Machine back to the late ’90s, it’s clear Milwaukee.com and sites like it never lived up to their lofty domain names. They were just there—doling out some information, sure, but mostly generating revenue for an out-of-state digital media group.

Boulevards didn’t respond to questions about the future of the now-shuttered Milwaukee.com, but, unless someone’s willing to pony up seven figures to buy the thing, there’s little hope it’ll be anything worth visiting in the future. Happily, there’s no shortage of homegrown sites currently celebrating a city that’s anything but “coming soon.”