A few days ago, while scrolling through my Facebook feed and pondering the existence of “National Siblings Day,” I came across a post by my friend Matt Massive. Massive, you may remember, was one of the architects of the Midwest rave scene in the early ’90s, and the publisher of the hugely influential Massive Magazine. These days, he’s been getting a lot of mileage out of ’90s nostalgia by selling back issues of the magazine and re-printed Massive T-shirts. It was one of those shirts that caught my eye. Sketched into the state of Wisconsin were the faces of two of its most notorious citizens: Ed Gein and Jeffrey Dahmer. Above them, the words “This is Wisconsin.” Below, “We eat people.” 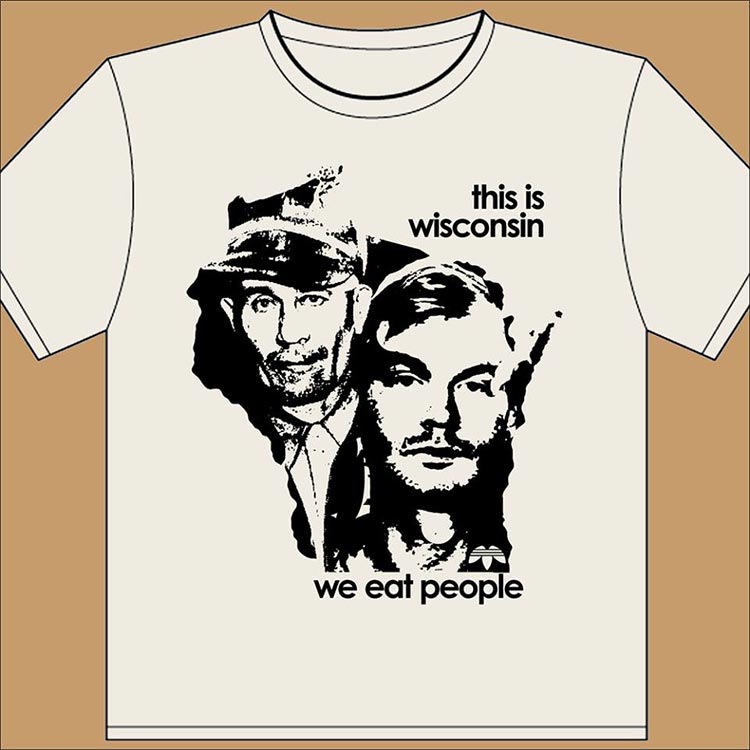 I chuckled. Holy shit, I used to love that shirt! Hell, I think I used to own that shirt! (The cannibalism slogan wasn’t/isn’t unique to Massive, by the way, and it was originally just a sticker.) Was it in bad taste back then? Of course. Was it darkly funny back then? Yes. Did it sum up the prevailing attitude of many Milwaukeeans and Wisconsinites back then? Absolutely. Would a similar design or sentiment fly today? Absolutely not.

So today is Milwaukee Day, the semi-official celebration of everything good and pure in the 414. What started as a joke amongst friends has grown into a grassroots phenomenon, with blessings from city officials and the local media, and acknowledgments from everyone from the Brewers to the Bucks. There are a handful of “official” Milwaukee Day events on the docket today, but the holiday mostly serves as an excuse to let your Milwaukee flag fly (puzzling design be damned) and publicly take pride in the city you call home. Preferably accompanied by an #MKEDay hashtag.

As someone who has lived in Milwaukee for over half his life, I can confidently say that an event like Milwaukee Day would never have been possible back when Massive originally ran that Gein/Dahmer design. Put simply, there wasn’t a lot to celebrate—at least publicly. The city was a different place: less sure of itself, more closed off, more “dark and beer drunk,” if you will. It was a rather typical Midwestern city struggling to find its identity in a post-industrial world. Milwaukee Pride™ was dim and unfocused. There was plenty to love, of course, but about the only things that made Milwaukee truly famous were beer, some old sitcoms that took place here but weren’t filmed here, and, well, someone like Dahmer.

Fast forward 20 years or so, and it’s safe to say that a Gein/Dahmer T-shirt would stick out like a sore thumb. Think of the dozens (hundreds?) of pro-Milwaukee shirts you see on the backs of every man, woman, and child in the city. Think of all the celebrated designers: MilwaukeeHome, Orchard Street, Too Much Metal/Rock/Jazz/Folk/Whatever For One Hand. The list goes on. Only Wiskullsin and Brew City seem to have any sort of “bite” to their shirts (“Don’t Whack Our Weiner” is always a winner in my book), but even they tend to be safely pro-Milwaukee/Wisconsin.

And it’s not just T-shirts, of course. The past five years have seen Milwaukee Pride™ kicking into overdrive. Beyond Milwaukee Day, think of groups like NEWaukee. Think of sites like OnMilwaukee, Urban Milwaukee, and of course, Milwaukee Record. Think of all the local rallies and good feelings surrounding the Bucks. (The Bucks!) What was once a lowly Rust Belt city with little to no prospects has suddenly become a city of reinvention, a city of potential. It’s now a beacon for smiling, urban-loving young people (or so we’re told), lured here by our incredible music (true), incredible music venues (true), incredible restaurants (true), incredible neighborhoods (true), and cheap rent (less true every day). And who can blame them? Put simply, the Milwaukee of today is better than the Milwaukee of yesterday (culturally speaking, at least). Kudos to everyone who has made that possible.

And yet… And yet I find myself missing some of that Massive attitude in today’s civic-cheerleader-fied Milwaukee. There was always something quintessentially “Milwaukee” about, well, talking shit about Milwaukee. Sure, you would jump to the city’s defense when challenged by an out-of-towner, but making fun of Milwaukee yourself was totally acceptable. (Kind of like how it’s okay for you to yell at your kid in a grocery store, but not okay for a stranger to do so.) These days, suggesting that Milwaukee is anything less than the Greatest City On God’s Green Earth, or that it might be, well, a rather typical Midwestern city struggling to find its identity in a post-industrial world is tantamount to treason.

There’s also an unbecoming undercurrent of “If you don’t love this city and everything in it you should just fuck off and move to the suburbs, grandpa” sentiment flowing beneath all the pro-Milwaukee chatter. On one hand, it’s understandable: the city has been Wisconsin’s punching bag for decades, and a brief perusal of, say, Journal Sentinel comments will reveal an ugly outsider vision of Milwaukee that hardly jives with the truth. On the other hand, that kind of attitude screams of “local pride at all costs,” and conjures up the dreaded “elitism” slur that gets tossed around every time we want to build a streetcar or whatever. Hell, if the Bucks made it a point to include the entire state of Wisconsin in one of their new logos, can’t we at least go easy on folks who may not have “I LOVE MILWAUKEE” permanently branded on their foreheads?

Maybe not. In many ways, it’s tough to feel much Milwaukee pride this week. A horrific shooting over the weekend and another one last night were yet another series of black eyes for the city, and news that UW-Milwaukee will be shedding up to 300 employees in advance of looming budget cuts is downright depressing. And that’s just this week. Is it really appropriate to be wishing each other “Happy Milwaukee Day!” and making inside local jokes on Twitter?

But maybe there’s a middle ground. Maybe we can love this city and recognize that, in fact, it’s far from the Greatest City On Earth. I’m not suggesting we celebrate notorious serial killers on our T-shirts, but there’s something to be said for tempering our local pride with a little humility—and humor. Maybe then we can finally make this city a better place for everyone. Maybe then Milwaukee can live up to the hype, and live up to its own holiday.