The Milwaukee Art Museum will reopen its main galleries to the public on November 24, following an extensive remodeling project. While many of the museum’s favorite pieces have been off display during construction, they will be back along with new pieces—including some from famed Milwaukee industrial designer Brooks Stevens. While the name may not be well-known, Stevens’ immensely influential career and work have become staples in everyday American life, and his ideas originated right here in Milwaukee.

Clifford Brooks Stevens was born in Milwaukee shortly after the turn of the 20th century. He suffered from polio at the age of eight, and dealing with and defeating the disease became an influential factor in the young designer’s life. While Stevens was on bedrest to overcome his illness, his father did not want his son to lie aimlessly. His father brought him model kits and notepads and tablets to keep the boy’s imagination active. Stevens spent countless hours drawing and crafting from the kits his father continued to bestow upon him, creating a mind that would eventually become one of the most influential of the 20th century.

As a young man Stevens moved to New York to study architecture at Cornell University. However, his love of design did not translate into buildings and bridges. Instead, he found himself wanting to sketch the objects he saw around him. He once said, “If I spent as much time on the bank building as I did on the cars that I drew on the rendering in front of the building, I could have been a good architect.”

Stevens dropped out of school, returned home to Milwaukee, and worked as an inventory manager at a grocery supplier. His interest in design took hold once again, and he re-invented a logo for his employer. But attaining this type of work was not always easy. In The New York Times, Stevens said, “I had to fight my way in to talk to anybody in the ’30s. I had to not only justify myself, but justify my profession.”

Stevens’ success continued to grow as he created logos for other companies in the Milwaukee area. But unlike his peers, as his accomplishments grew, Stevens did not want to relocate to a major metropolitan area like New York City. Despite the fact that industrial design was still an emerging field, he believed Milwaukee’s growing industrial market contained untapped potential. He would focus his work within his hometown.

With experience under his belt, Stevens opened his first office in downtown Milwaukee in 1935, with a staff of five employees and just over two-dozen accounts. He and his wife then built a house in Fox Point that still stands of one of the area’s best examples of modernist art deco home design, and is a local historical landmark.

The Great Depression and World War II changed many Americans’ attitudes about consumerism. For nearly two decades, citizens were asked to save and buy war bonds, not fancy new products to make their lives more convenient. This posed a challenge to the many industrial designers trying to sell new products. While most production during those years was geared towards the war, Stevens took this time to create a new approach to design by incorporating sales. One of his earliest victories came when he took the standard-issue military Jeep and turned it into something an average American would want to buy. Introducing the Jeepster: “America’s Outstanding Sports Car—Anywhere!” 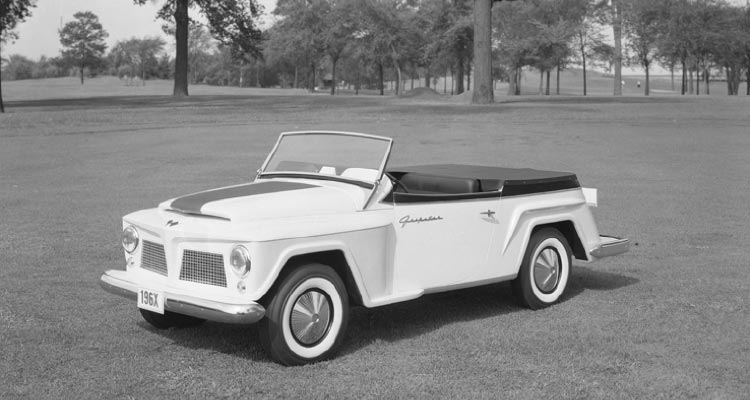 After the war, Stevens’ business boomed. Markets were up, the country had high levels of employment, new jobs were being created, and the American economy was soaring to new heights. He took on well-known Milwaukee companies as clients, such as Miller Brewing, Allen-Bradley, Outboard Marine Company, and Harley-Davidson. His idea of design and style mixed with sales and marketing again would shine when Stevens designed the Olympian Hiawatha. This innovative speedliner train, run by Milwaukee Road, included an all-glass observation car called The Skytop Lounge, featuring a sleek design with 90-percent window cover at the rear of the train. The service route included Chicago, Milwaukee, Saint Paul, and continued all the way to the Pacific Ocean, with the Skytop Lounge allowing passengers to catch the striking landscape through the western mountains and scenic landscapes. With modern amenities and stunning views, Stevens’ train cars were billed by Milwaukee Road as “the perfect ending for the perfect train.” 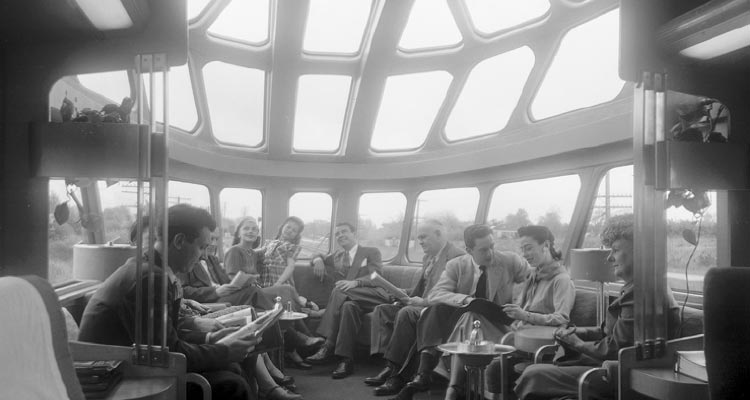 As Stevens’ success continued and his business grew, he remained in his hometown—despite many offers to move to New York City. This dedication earned him the honor of being the only Midwestern founder of the Society of Industrial Designers (SID), which currently has thousands of members. The recognition of his innovative work continued when he was the first industrial designer to be featured in a one-person museum retrospective at the Milwaukee Art Institute in 1950.

Stevens originated a diverse collection of over 3,000 products in his lengthy career. Most of them were geared toward the American household, from cookware to refrigerators to wide mouth peanut butter jars. His work with Miller Brewing is still iconic to this day, as he came up with the logo for the classic Miller High Life: “The Champagne of Beers.” Even from a material standpoint, while working with Miller, Stevens influenced the company to change the bottles from brown to clear to accompany the message of this elegant bubbly brew. At Harley-Davison, Stevens designed a front fender for the 1949 Hydra-Glide motorcycle that is still used to this day in the company’s line of Heritage Classic motorcycles.

One of Stevens’ most recognizable creations is the Oscar Mayer Wienermobile. The infamous vehicle of a giant hot dog on top of a wheeled bun was a beloved logo for millions of American children. Stevens designed the fleet of six Wienermobiles to travel across the country and promote Madison, Wisconsin-based Oscar Mayer products. The drivers—known as Hotdoggers—were recent college graduates who made stops in cities across the county hyping Oscar Mayer. If you were lucky enough to attend one of these events, you would receive a toy replica of the Wienermobile in the form of a whistle—known as Wienerwhistles. Stevens’ design was very successful, creating a wildly recognizable image that could be seen on television and in person, and could make Americans simply eat more hot dogs.

Brooks Stevens died on January 4, 1995 at the age of 83 in Milwaukee. His son, Kip, took over the Brooks Stevens Design Associates firm at his retirement. The work of the elder Stevens was seen in everyday American life for decades, and can still be found in everyday products we rely on and use today. After his passing, Stevens’ collection of photographs, videos, prints, and designs were cared for by the Milwaukee Institute of Art and Design until they were bequeathed to the Milwaukee Art Museum. His full collection remains in MAM’s care, but the general public can view many of these images via the museum’s online archives, which contain over 8,000 digitized images.

So the next time you are at a baseball game or a backyard BBQ drinking a High Life and eating a hot dog, you can take comfort in the knowledge that this iconic American imagery came from a very hometown place and name: Milwaukee, and Brooks Stevens.