Every Friday, Off The Record looks to other Milwaukee publications for bits of news we missed throughout the week.

• For a city that prides itself on its proximity to Lake Michigan, Milwaukee’s downtown lakefront is remarkably dumpy. Freeway ramps, half-empty transit centers, and concrete parking structures greet pedestrians as they shuffle across Lincoln Memorial Drive, searching for the mighty Great Lake. Parked on Wisconsin Avenue and looking to get to Discovery World or Summerfest? If you’re visiting from out of town, good luck!

Happily, that’s due to change—and change even more drastically than previously thought. Maybe. The Journal Sentinel reports that the proposed 44-story Couture apartment tower—featuring 302 “high-end” apartments—has been beefed up to include more public space for folks who can’t afford $2,300 a month in rent:

The 81,560 square feet of public space would include a 29,385-square-foot park on the top of the development’s four-level parking structure; a 20,855-square-foot public transportation concourse with a stop for an expanded city streetcar system, and bus connections; a street-level outdoor plaza, and a pedestrian bridge over Lincoln Memorial Drive to the lakefront, according to a statement from County Executive Chris Abele and Mayor Tom Barrett.

But the Couture is far from a done deal. The complex is set to replace the Downtown Transit Center, a location that happens to be considered public land and unavailable for private development under the Wisconsin constitution. Preserve Our Parks has threatened to sue the county if the sale of the site goes through, a move that one of the forces behind the Couture project, Michael Cudahy, calls “ludicrous.”

Either way, here’s a rendering of the Couture public plaza, which looks all Star Trek-y and awesome. 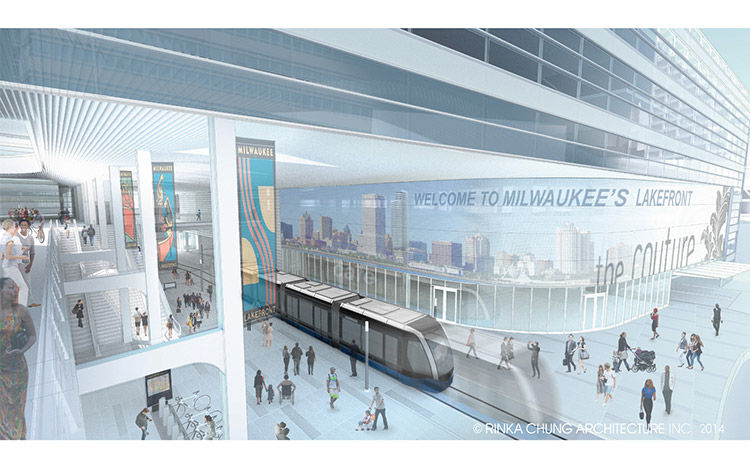 • Speaking of Summerfest, the City of Milwaukee is pressuring the Big Gig to pony up for some or all of the $509,950 it spent on police and fire protection during this year’s fest. The Journal Sentinel has more.

• Last year, football junkies and former Saturday Night Live fans who tapped out sometime during the Will Ferrell era were delighted by those State Farm ads with Aaron Rodgers kicking it with the “Da Bears” guys. Now, in a new Discount Double Check campaign, Rodgers is palling around with another moldy SNL creation: Hans and Franz. There’s clearly no better way to sell insurance (and pummel a girlie-man) than muscle against flab, fist against poop-filled diaper.

• Bruce Murphy at Urban Milwaukee kicked a weathered, leather-clad hornet’s nest with a piece about the “unbearable loudness” of Harley-Davidson motorcycles.

• Ubiquitous local t-shirt company MilwaukeeHome—the clothing equivalent of a second round of Jägerbombs—is taking its brand of highly specific, deeply personal civic pride and applying it to just about any city on planet Earth. Yes, thanks to “Our Home City,” you can now rock NewYorkHome, LosAngelesHome, PortlandHome, or JustTellUsWhatToPrintHereHome shirts, because nothing says “local love” than shelling out $29.99 for a shirt that shows your love for [insert name of city here]. 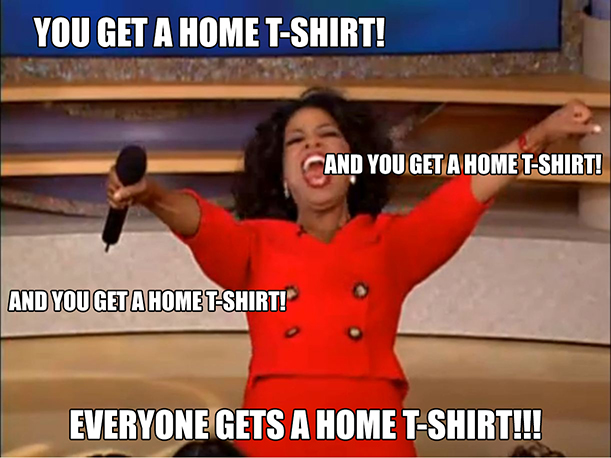 • The Milwaukee Business Journal has info on President Obama’s appearance at Milwaukee’s Laborfest earlier this week.

• The Shepherd Express spoke to Herman Astro about their upcoming album, Mean Gene. The album will be released at a show Saturday, September 6 at Mad Planet.

• Former Milwaukee-based filmmaker Parker Winship is nearing the end of Kickstarter campaign for his upcoming film, Sorbet Perplex. The film concerns “intimacy, lab explosions, secrets, and ice cream flavors,” and looks pretty fucking rad. Check out the trailer below, and chip in a few digital dollars.