Our fat-free, dolphin-safe Milwaukee events calendar is chock-full of things to do, but only a handful of events are worthy of the lofty honor of “Record Recommended” (patent pending). Here are our recommendations for December 2-8.

Shot For Shot With Chefs Episode 4 Screening @ The Cooperage
Join us at The Cooperage for a premiere of the fourth Shot For Shot With Chefs episode, featuring Dan Jacobs and Dan Van Rite of DanDan, Fauntleroy, EsterEv, Ash Milwaukee, and more. We’ll screen the new video, then talk about the parts we can remember from that drunken night of food talk, sports banter, pull tabs, and crazy consumption of beer and liquor. Bofferding—the official beer of Shot For Shot With Chefs—will have its delicious Pils and Brune on special all night long, and you can expect some specialty cocktails from spirit sponsor Great Northern Distilling. Come by around 7 p.m. and stay for the screening at 8 p.m. This 21+ event is FREE. 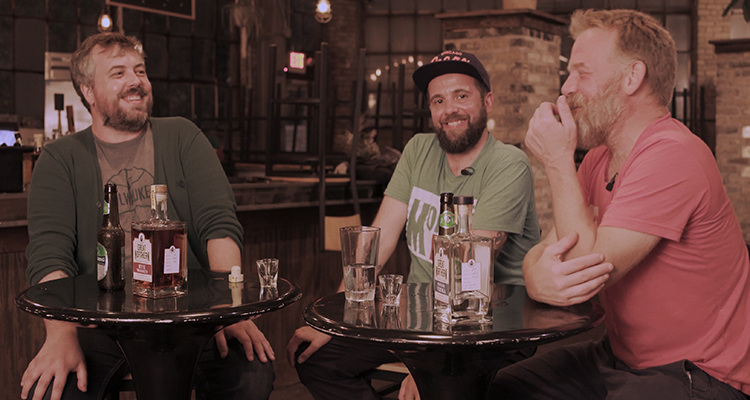 WMSE’s Holiday Local/Live with L’Resorts @ Club Garibaldi
Around this time last year, L’Resorts officially announced its existence by releasing a holiday EP entitled Christmas Is A Time For Dreaming. In the 12 months that followed, the band that features members of Jaill, Lady Cannon, Sat. Nite Duets, Ruth B8r Ginsburg, and more released a (non-holiday-related) full-length, toured, became a fixture at area festivals, and nabbed some impressive opening opportunities for out-of-town acts. Along the way, the somehow found the time to record another seasonal release. Join L’Resorts at Club Garibaldi when the now-well-established Milwaukee band plays songs from its new Trying To Christmas as part of WMSE’s holiday installment of Local/Live. It’s free. It’s fun. Be there.

Cautious Clay + Remi Wolf @ The Back Room @ Colectivo
Sold out.

Milwaukee Krampusnacht 2019 @ Bavarian Bierhaus
If you’re looking to spice up your holiday season with a little something off the beaten Hallmark Christmas movie path, look no further: On Thursday, December 5, the third annual Milwaukee Krampusnacht will return to the Bavarian Bierhaus for a night of costumes, music, food and drink, arts and crafts, and general tributes to the half-goat/half-demon Krampus, a figure from Alpine folklore who punishes naughty children and acts as a foil to the do-gooding Saint Nicholas. Wait, what? Yes, past installments of Krampusnacht have been big hits, packing the Bavarian Bierhaus (and originally Lakefront Brewery) and generating a ton of yuletide buzz. This year’s shindig looks to be a doozy, too: There’s a parade sponsored by American Science & Surplus. There’s a sing-along to “The Nights Of Krampus,” courtesy of Chicago’s The Courtesan And The Cabin Boy. (The name of their album? Krampus: Get In My Sack!) There’s the return of “Kid’s Krampus Hour,” which is incredible.


Smoking Popes + Direct Hit! @ The Back Room At Colectivo
Chicago pop punk legends, Smoking Popes, will come to their second home—the comfy confines of The Back Room @ Colectivo—to play yuletide songs and their own material during this year’s Heartbreak For The Holidays show. They’ll be preceded by Milwaukee’s and Fat Wreck Chords’ own Direct Hit!, playing one of their only local shows of the year.

Late Night With Mondo Lucha @ The Cooperage
No, it’s not a new late-night talk show (though it totally should be)—it’s another Mondo Lucha pop-up wrestling event. Neat! Superstars of the long-running, terrifically popular, and homegrown Lucha Libra company will perform for an intimate crowd of 200.

Holiday Comedy Extravaganza with Tom Clark + Steph Clark, more comics TBA @ Rounding Third
Milwaukee-born funnyman Tom Clark has done voiceover work on Aqua Teen Hunger Force, wrote for The Man Show, and acted opposite Bob Odenkirk, Denis Leary, and Kyra Sedgwick in small film and television roles. However, the locally-bred talent is probably best known for his work on stage, having amassed appearances on Conan and Comedy Central. No long removed from the release of his Amazon Prime special, Outraged, the longtime road comic and comedy club regular will return to his hometown for one night only to co-headline a Holiday Comedy Extravaganza with his wife, Steph Clark.


“Murray Christmas” @ Avalon Theater
For those of you seeking an extremely small dash of holiday spirit on top of the seasonal annoyances and expectations this season, Milwaukee Record and Lakefront Brewery have just the thing. On Saturday, December 7 and Sunday, December 8, you can have yourself a “Murry Christmas” at Avalon Theater when the theater screens a pair of beloved Bill Murray films. The two-day holiday event will start with an 11 a.m. screening of Scrooged, the hilarious 1988 comedic take on Charles Dickens’ A Christmas Carol. The Christmastime cult classic will be followed by a 7 p.m. showing of the seminal 1981 military romp, Stripes. The next day, the showtimes will reverse. Tickets to screenings cost $5 apiece and they’re available now. Murray Christmas to all, and to all two good nights.

Joan Shelley + Daughter Of Swords @ The Back Room @ Colectivo

Milwaukee Record Halftime Show: Yogie B & Keez @ Cactus Club
The Milwaukee Record Halftime Show concert series at Cactus Club is back! Once again, we’ve assembled a stacked roster of 16 projects to provide FREE (21+) halftime entertainment. And, once again, our friends at Miller High Life are sponsoring our football-focused festivities, meaning fans can enjoy “The Champagne of Beers” for $2.50 a bottle, or $10 for a bucket of five beers all game long. And, yes, there will be touchdown shots.

Puddles Pity Party @ The Back Room @ Colectivo
So yeah, this is pretty much just a dude dressed in creepy clown attire singing songs you know and love. The strange gimmick would fall flat if it wasn’t so beautiful and well-executed.