Oh. No one. It’s just a “strategy by real estate brokerage firm Colliers International to market the site.” You know, to show “what’s possible.” Nice renderings, though. [Urban Milwaukee] 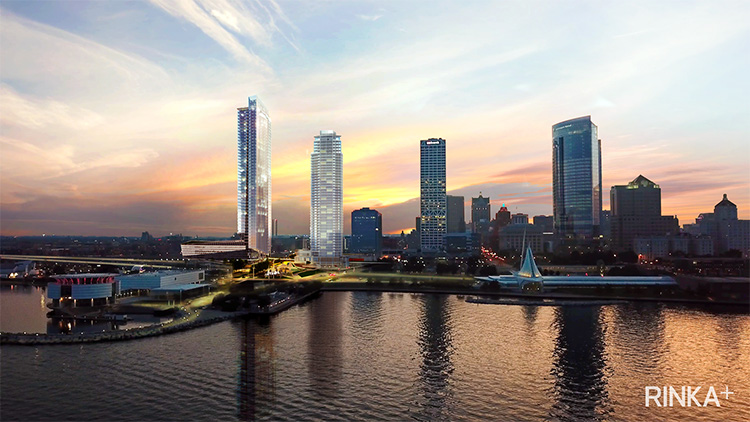 • The official naming-rights sponsor of all of Milwaukee, American Family Insurance, is getting close to revealing the site of its new downtown office. The Madison-based company hasn’t revealed whether it will build a new office building or remodel an existing one. [Milwaukee Business Journal]

• Honeypie is up to something at the former Alchemist Theatre in Bay View. The 10-year-old business is seeking a permit for commercial alterations to the recently vacated Alchemist building. “We are not quite ready to talk about the details of it. We don’t have dates or a clear timeline,” says Honeypie’s Valeri Lucks. [Milwaukee Business Journal]

• Bader Philanthropies recently opened its new headquarters in a redeveloped building at 3300 N. Martin Luther King Jr. Now, it’s redeveloping a nearby two-story building into a “home for a cafe and integrated medical and holistic care provider.” The cafe will be the “jazz-infused” Sam’s Cafe, and the medical and holistic care provider will be Shalem Healing. [Urban Milwaukee]

• Back in June, Milwaukee turned down a proposal from Wangard Partners Inc. to build some apartments and retail space at Freshwater Plaza at South First Street and East Greenfield Avenue. The city hoped to attract other developers, and issued a public request for proposals. Responses to the RFP were due this week. None showed up. [Milwaukee Business Journal]

• A plan to convert the empty Carleton School at North 41st Street and West Silver Spring Drive into 60 mixed-income apartments has been put on hold. Why? Neighbors aren’t into it. [Milwaukee Business Journal]

• The Charles A. Koeffler, Jr. House, located at 817-819 N. Marshall St., is still gonna be turned into a boutique hotel. [Urban Milwaukee]

• THAT 55-UNIT APARTMENT BUILDING ON THE CORNER OF OAKLAND AND LOCUST IS ALMOST DONE AND YES IT’S STILL GONNA HAVE A COUSINS. [Urban Milwaukee]