Depending on which news sources you follow, Milwaukee is going through either a “renaissance” or a “reinvention.” Or maybe it’s a “development boom” or a “construction boom.” Or maybe it’s a “reboot” or a “reimagining,” like that crappy Tim Burton version of Planet Of The Apes. However you want to define it, it’s safe to say that Milwaukee is currently building a lot of new shit. For example:

• Summerfest is getting a brand-new U.S. Cellular Connection Stage for its 51st birthday. According to the Big Gig, the new stage will include increased capacity, a “stunning backdrop of the Milwaukee skyline and the lakefront,” a larger performance area, a 25-foot LED video screen (the largest on the grounds), an open-air backstage loft area, mobile device charging amenities (including benches where you can plug your shit in), and a redesigned bar area. The current US. Cellular stage will be demolished following Summerfest 2017; the new stage will be ready for Summerfest 2018.

• The Milwaukee Bucks’ so-called “Live Block” took one step closer to reality this week. The City Plan Commission unanimously voted in favor of the project, which, according to Urban Milwaukee, “would add three glassy buildings to a site immediately east of the new arena as well as a public plaza.”

• Nomad World Pub is planning to expand with a permanent beer garden and restaurant, says BizTimes. Nomad owner Mike Eitel “is planning to purchase a two-story home at 1668 N. Warren Ave. and build the Nomad World Pub Biergarten between the existing bar, which is located at 1401 E. Brady St. and the structure. The property at 1668 N. Warren Ave. had previously operated as Annie’s Vintage Clothing and Rarities. Eitel, already owns 1672 N. Warren Ave., and has demolished the building that had been on that property.”

• A War Memorial Center study is recommending Milwaukee build a lot of new shit along the downtown lakefront. “New walking paths, a more elegant lakeside promenade, and better stormwater controls” are just a few of the things mentioned in a subscriber-only Milwaukee Business Journal report.

• A group of first-time developers is planning to build a four-story, 43-unit affordable housing apartment building in the area of 36th and Villard. Fox6 has more details.

• In “new shit they’re not building” news, a two-story building on the Milwaukee River that was once slated to become an 18-story apartment and office building was instead sold to the owners of a neighboring apartment complex. “We were overall looking to protect our asset, and what better way to protect our asset than to control this property?” the Milwaukee Business Journal quotes one of the buyers as saying.

Gouda Girls, which serves American comfort food; Huan Xi Express, a Chinese eatery; Tokyo Express and Bread House, a Japanese and Asian bakery; Upper Crust Pizza, which offers pizza, gyros and fried foods; and Meat on the Street, which serves Filipino foods. The cafeteria, which opens at 8 a.m. on Monday, comprises 8,000 square feet of space and can seat 250 people.

No word yet on whether Culver’s will ever return to the Grand Ave. food court. 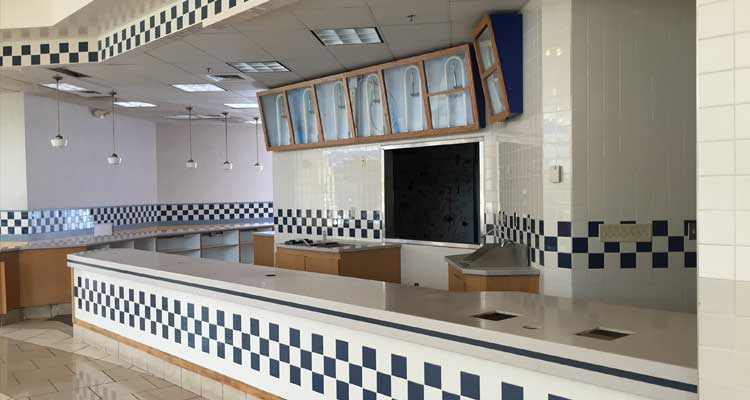