After months of cold, dreariness, premature darkness, and an absence of outdoor activity, the sixth annual Burnhearts Mitten Fest is just days away. For eight hours (noon to 8 p.m.) on Saturday, February 3, portions of Potter and Logan avenues flanking the Bay View bar will be blocked off to host a single-day break from winter’s cold, cruel grasp. There will be live music. There’s going to be delicious craft beer rarities and a sea of brandy drinks. There will be food, philanthropy, and (hopefully) an overwhelming aura of positive vibes and togetherness expressed through our shared defiance of mother nature that’s shown partying outside during nature’s last full month.

Though the young event has quickly become Milwaukee’s favorite winter celebration, some of you might not know much about Mitten Fest. Others have surely attended, but might not be aware of what to expect this time around. Fear not, citizen. Milwaukee Record—an official Mitten Fest media sponsor—has assembled a guide of everything you need to know about Burnhearts Mitten Fest 2018.

Where can I escape the cold?
With the word “Mitten” being in the name and all, you should prepare for cold conditions. Dress appropriately. Currently, the forecast calls for a high of 30 degrees with snow. There will be a few propane heaters scattered around, but that’s about it. If you need to thaw out, Burnhearts will be open for business as usual. And even though Mitten Fest is Burnhearts’ baby, the bar’s owner and Mitten Fest organizer William Seidel considers the event to be a Bay View celebration, and he urges people to visit other neighborhood establishments throughout the day.

“We encourage attendees to patronize other Bay View businesses,” Seidel told us before a previous installment. “It’s a good day for our community as a whole. We only ask that patrons understand that it is an unusually busy day for all of the bars and restaurants and to please be patient and nice to the employees of these businesses.”

Who’s playing again?
As always, Mitten Fest organizers brought in something for almost everyone. Whether you time your visit to catch your favorite act or you stay all day and let the eclectic musical mix serve as your celebratory soundtrack, you’re going to leave happy.

Slow Walker heads up this year’s lineup. If there’s a better way to conclude a beer-soaked day all bundled up in the elements, we haven’t heard it. The garage rock outfit has a new record on the way this winter, so you can hear some new material and hear the band reprise some songs they played just blocks away and six months removed from their memorable Bay View Bash performance.

About a fortnight after stealing the show at Local Coverage with his performance of Whiskey Of The Damned’s songs, Lex Allen is back to performing his own material. Mix some “Cream And Sugar” in your brandy barrel old fashioned Saturday evening.

With a symphony of synth behind larger-than-life melodies and jutting guitar licks, NO/NO would’ve killed in the ’80s. Fortunately, Milwaukee has them now, along with their catalog that includes Sound And Light (which we dubbed the best Milwaukee album of 2016), last year’s Twentysomethings EP, and a nifty new Negative/Positive cover that all demand to be heard in any era.

In times like these, a band like Fox Face has never been more important. Following some blistering (but tauntingly short) EPs in the band’s early years, the up-and-coming punk quartet released its debut full-length, Spoil + Destory on Dirtnap Records last year. The record is rife with political commentary, scientific advocacy, and even a cover of Britney Spears’ “Toxic” thrown in for good measure.

Rose Of The West played its first show as a full band less than a year ago. Though that fact suggests the dream-pop project composed of current and former members of GGOOLLDD, Canopies, Faux Fir, and Hello Death is inexperienced, the band’s path to this point actually stretches as far back as early 2014. After a name change, significant overhaul in band make up, various personal hardships, and a noticeable change in sonic direction, Rose Of The West is ready to formally introduce themselves to punctual Mitten Fest attendees with what’s sure to be a dazzling and dance-y opening set.

As always, local treasure Chris Schulist will DJ between acts.

What am I drinking?
Burnhearts will serve rare and limited beers from their pals at Central Waters and Founders, barrel old fashioneds, Korbel and Tullamore Dew & Valentine Coffee “Irish Dream,” and ginger brandy. If craft brews and brown liquor aren’t your bag, you’ll also find a full bar inside. But honestly, this is like beer nerd Christmas. Here’s an exclusive first full look at what’s on tap.

But carry-ins are allowed, right?
Fuck no. If you bring in your own booze, not only would you be risking a fine, you’d also be threatening the continuation of Mitten Fest itself. As dramatic as it sounds, it could take as little as a few empty Busch Light cans on someone’s lawn or a smashed bottle of Boone’s Farm in a nearby alley to risk casting this overwhelmingly positive event in a negative light. C’mon, people! There’s a bunch of great (and rare) craft beer on hand, brandy cocktails, and 10 bars within walking distance. Don’t be a dick.

Will there be anything to eat?
Absolutely. Goodkind, Iron Grate, “Mitchy” Taco, Lumpia City, and Honey Pie (bakery) will be around to vend food on-site. Otherwise, if you wish to break away for a bite, Vanguard is a short walk away, as are Hi-Fi, Hué, Honeypie, Crafty Cow, Hot Head Fried Chicken, Hungry Sumo Sushi Bar, and a number of other excellent restaurants.

How does this benefit charity again?
Beyond being a means of celebration and cause for local businesses to have a major single-day boom during a typically slow season, there’s also a beneficial bent to Mitten Fest. Last year’s event brought in considerable donations of clothing, food, and cash to Hunger Task Force. Compost Crusader will also be on site to help limit waste.

Now that you know everything you need to about Mitten Fest, you should be ready to bundle up, get off the internet, and go outside this weekend, Milwaukee! We’ll see you there. 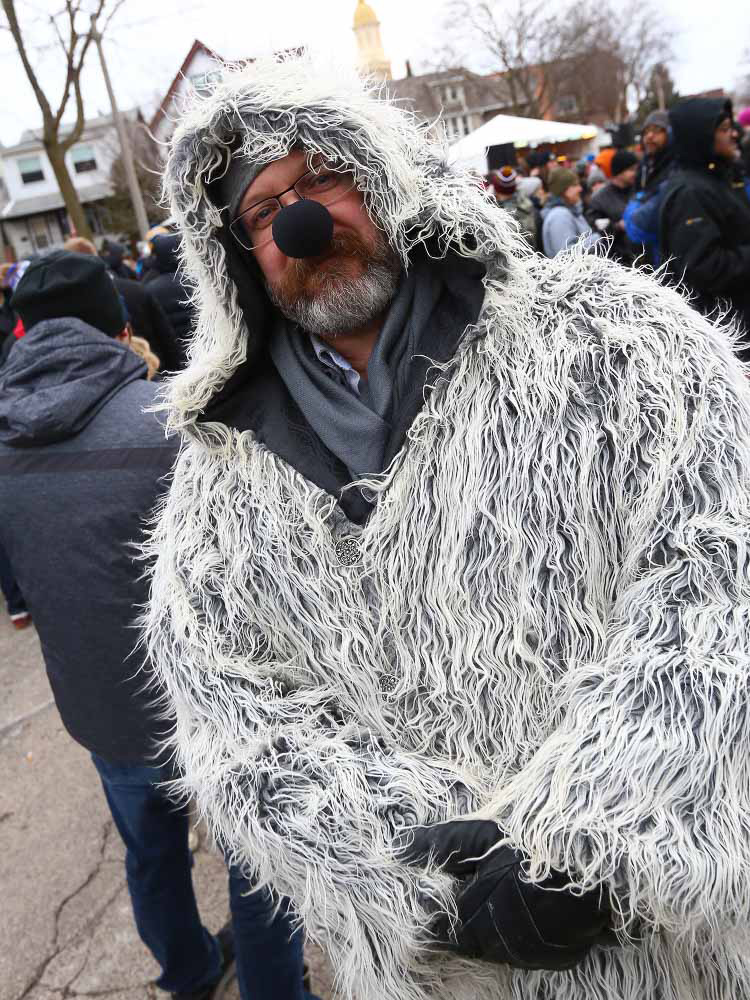