Trakker was designed and programmed by Greg Corcoran, a former software developer for IBM. Feeling unfulfilled with his full-time gig, the Waukesha resident threw himself into the world of VR game design and eventually partnered up with GalactaVision founder Nathan Thorin. Trakker, the pair’s first game (Thorin provided the visuals and graphics), took about seven months to build.

“The soulless corporate grind was starting to get to me,” Corcoran says. “I wanted to have some sort of control, some autonomy, over my job, and I didn’t have it. But with this type of stuff, there are so many things that really aren’t figured out yet with VR.”

One of those things that hasn’t been cracked yet: movement. With players tethered to pricey HTC Vive headsets, creating the illusion of traversing a virtual world is tricky. Corcoran solved the problem by implementing an arm-swinging mechanic. Players grip a pair of motion-tracked controllers, swing their arms back and forth as if they were running, and presto. Their virtual bodies rush headlong through a deadly maze filled with glowing red baddies.

“Movement is an issue in VR,” Corcoran admits. “But now I get to have this autonomy and try to make this work.”

“I’ve seen a lot of VR experiences that are going for these super large and lush landscapes, which becomes kind of a problem,” he says. “When you’re trying to go for this picture-perfect scenario, you’re going right into all the weaknesses of VR. Maybe a part of it was the contrarian in me. ‘You know what? I’m not going to do realistic, and I’m not going to do a big thing. I’m going to stick you in a corridor.’ It’s the simple basics of the arcades.”

Trakker‘s story and gameplay are just as deceptively simple: You take on the role of a titular “Trakker,” a guardian of the digital realm tasked with defending against an ever-spawning army of viral intruders. Point either of your arms at the enemies, pull a trigger, and blast away. Make it to the end of the maze and do it all over again.

But there are some clever tweaks to that formula. There are eight levels, each with three difficulty settings and three achievements. Thus, players looking for a quick VR fix can simply run around and seek out the next level; more experienced players can go for those achievements (collecting all the Pac-Man-like pellets, or “files,” for example) and enjoy a more frantic, challenging experience.

“I was trying to balance it in a way that it ends up getting considerably harder when you do try to get those achievements,” Corcoran says. “It opens it up so that a wider variety of people can play the game.”

Completing Trakker’s immersive experience is its soundtrack, provided by Milwaukee synthwave producer Dashcam. It’s a perfect fit for the game, and there’s something wonderful and thrilling about losing yourself in a Tron-esque VR environment while listening to the dreamy wash of, say, “Blue Eyes” (featuring NO/NO’s Cat Ries on vocals).

Trakker is currently in early release, and further changes (more levels, more enemies, possible multiplayer) may be on the digital horizon. A full release is planned for either late 2018 or early 2019.

GalactaVision recently demoed Trakker at the 2018 Midwest Gaming Classic, and the reaction from players was overwhelmingly positive. The experience gave Corcoran all the encouragement he needed to continue pursing his VR dreams.

“Coming from my background, from the soulless corporate society, there were a few moments where I felt like I wanted to hide in a corner and ugly cry for a moment,” he says of the MGC demo. “It was one of those moments where I really felt like I made the right decision.” 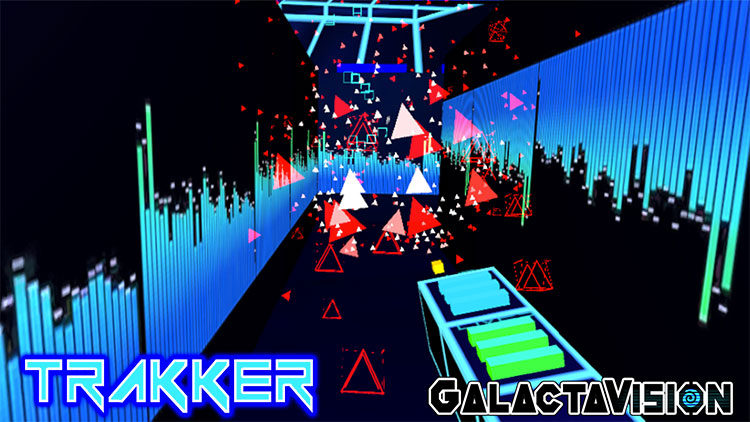