• On Tuesday, October 10 at 10 a.m., Discovery World will host a groundbreaking ceremony for its $18 million expansion. Per Discovery World, “the project will add nearly 20,000 square feet of accessible public space to Wisconsin’s largest Science and Technology Center and provide the organization with versatility to help achieve a bigger impact on the community while also forging an important path toward long-term financial sustainability.”

The second phase of the expansion will significantly reshape major exhibit space and reimagine the ways in which visitors engage with the facility. When fully functioning, the improvements will double the amount of exhibit and program space currently available in the Discovery World Technology Wing. The project will result in the transformation of one of the facility’s two theaters into a new Grand Entrance and Exhibit Gallery as well as open a Mezzanine Level previously inaccessible to the public. Two new permanent exhibit experiences will be added, including a new 5,000 sq. ft. exhibit focusing on public health, medical research and careers in health care.

• The Milwaukee Bucks unveiled updated plans for their new arena’s “entertainment block.” A (mostly) covered beer garden will connect the plaza in front of the new area to Old World 3rd St. Along with beer (natch), the beer garden will have a big-ass TV. [Milwaukee Journal Sentinel] 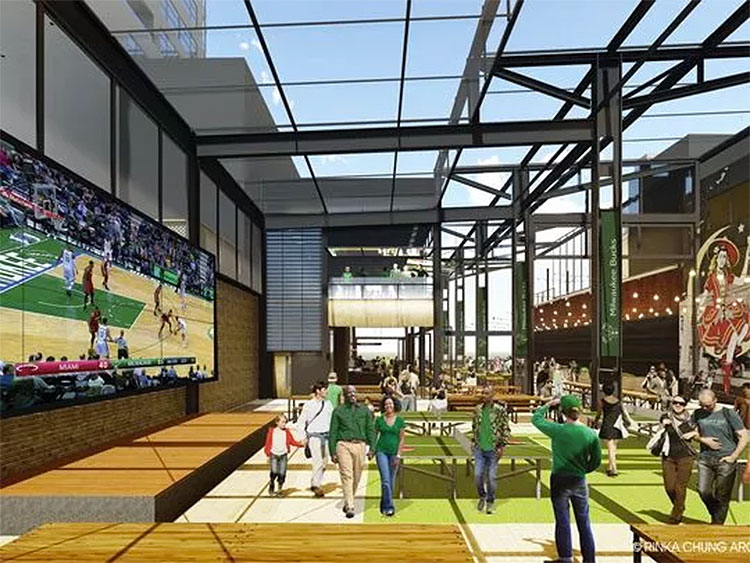 • Want a peek inside the Mackie Flats, a.k.a. the 25 new apartments in the renovated Mackie Building (home to the Swingin’ Door Exchange) that run between $990 and $2,490 a month? Gaze upon them and weep. [Urban Milwaukee]