While the internet continues to argue about Star Wars: The Last Jedi (spoiler: it’s okay!), let’s take a moment to remember a recent blockbuster that everyone agreed sucked: 2016’s Batman v Superman: Dawn Of Justice. Finally! A dark and brooding (and boring) Superman! Yet another trip through Batman’s origin story! A bloated and nonsensical plot! Jesse Eisenberg as a tech bro Lex Luthor? Ugh.

Anyway, East Side comic book shop The Turning Page, 2452 N Murray Ave., has a big-ass Batman and Superman mural on its south wall, and it’s way better than BvS. (It’s also better than the bad—but not-quite-as-bad—Justice League). Artist Taylor Fiester added ol’ Supes to the exterior of The Turning Page this past summer, and finished up Bats a few weeks ago. His creation is big, bold, colorful, and charmingly DIY—everything the recent spat of DC movies ain’t.

Want to check out the mural in person, but just don’t find yourself hanging out across the street at Murray Pantry as much as you used to? (The Jazz Estate and The Tool Shed are also nearby, FYI.) Then stop in Saturday, January 6 for The Turning Page’s 1st anniversary (of new ownership) sale. And then watch the 1978 Superman and the 1992 Batman Returns, both of which are still terrific. 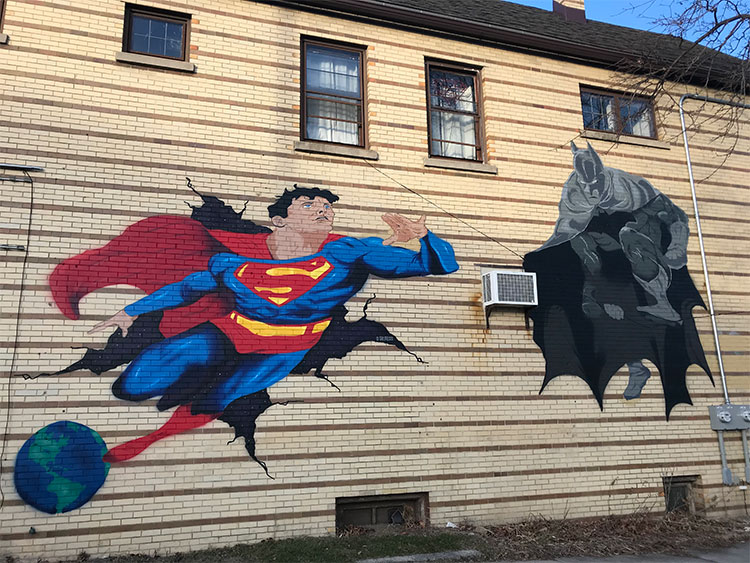