In case you’ve been living under a rock or you’ve been actively avoiding Milwaukee area entertainment news, allow us to be the bearer of good news: Hamilton is in town! If you haven’t been keeping up on the 2015 smash hit musical-turned-transcendent pop culture phenomenon, Hamilton toppled Broadway sales records, won an astounding 11 Tony Awards (out of 16 total nominations) along with a Grammy and a small fleet of Lucille Lortel Awards, and put Lin-Manuel Miranda on the map—earning the show’s lyricist/star/writer a Pulitzer Prize.

In the four years since the hip-hop take on the life and the complicated legacy of founding father Alexander Hamilton first hit the stage and brought an invigorating shot of energy to the world of musicals, Hamilton has ventured way off Broadway. In 2016, the show came to Chicago, followed by its inaugural U.S. tour and a residency on London’s West End the following year. A second U.S. tour followed last year, which gave way to a production in Puerto Rico in early 2019. It’s safe to say Hamilton is here to stay.

Now in the midst of its third U.S. tour in as many years (and with shows in Germany and Australia on the not-so-distant horizon), the musical theater touchstone finally stopped at Milwaukee’s Marcus Center for the Performing Arts, where it will be through November 17. We were fortunate enough to be in attendance for Wednesday night’s show, which was the second performance in Milwaukee. Though it was rainy and cold downtown, Marcus Center’s gorgeous Uihlein Hall was packed with a sold-out crowd that was “not throwing away [their] shot” to see Hamilton, even if the weather was crummy.

We’ll just tell you right off that it was incredible and unlike any other musical we’ve ever seen. If you’re looking for a more thorough recap of early Hamilton performances in Milwaukee, feel free to look at basically every other local publication. Instead of piling on with yet another straight-up review, we thought it would be a nice change of pace to give you some takeaways from our experience “in the room where it happened.”

It’s non-stop songs
Unlike many other musicals that pad their songbook with bits of unaccompanied dialogue to help advance the plot and space out the singing, Hamilton keeps the music coming for the entirety of the show. Being rooted in rap makes it possible provide exposition and push the plot at a remarkable pace. Through the magic of Miranda’s lyrics, which are set to compelling beats, Hamilton manages to ably tell the story of the eponymous revolutionary’s personal and professional life, and eloquently paint a picture of our young country in the late 18th century in an entertaining way.

But it’s not just hip-hop
Well aware we wouldn’t be seeing the show for some time due to geography, ticket availability and, well, the cost, we tried to go into our show experience blind…at least as blindly as one can be when it comes to an internationally-lauded masterpiece. Thus, we weren’t sure if the entire score would be in rap form. Early on, the flurry of verses that leaned largely on “sir” and “sure” and “Burr” and “Mercer” rhyming made us unsure if a purely hip-hop-rooted performance would sustain for nearly three hours. Fortunately, there are tons of ballads and other songs that incorporate winning melodies in the place of bars. The blend allowed for a great balance to be struck between touching pieces, exciting efforts about the “young, scrappy, and hungry” nation in its infancy, and left it room for ample amounts of humor. 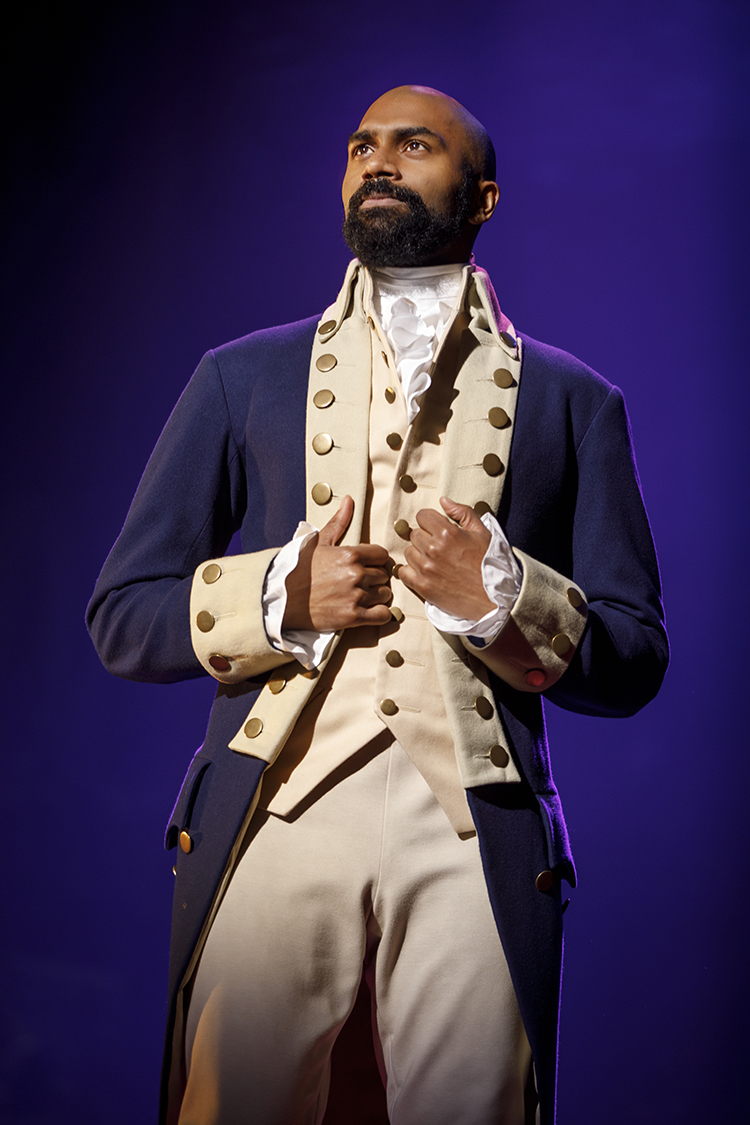 Aaron Burr can sing!
Speaking of reasons we were glad Hamilton was more than simply “the rap musical,” we were left floored by the indisputable pipes of the show’s chosen villain. In the role of Aaron Burr, Nik Walker made his mark with impressive vocal range, keen choreography, and acting ability that really sold the insecurities of the antagonist. Though his stage time paled in comparison to Walker’s, Marcus Choi also impressed with his singing abilities in the role of George Washington, as did Erin Clemons as Eliza Hamilton.

Joseph Morales was Lin-Manuel Miranda…who was Alexander Hamilton
Of course, Lin-Manuel Miranda bears exactly no resemblance to the real Alexander Hamilton, but that doesn’t really matter. The touring company’s lead being reminiscent of Miranda, however, seems far more crucial to the musical’s success. The show’s star, Joseph Morales—who was just wonderful, mind you—looked like Miranda. He sounded like him. He was even of similar stature. By all accounts, Morales did a great job invoking the show founder’s version of the founding father. 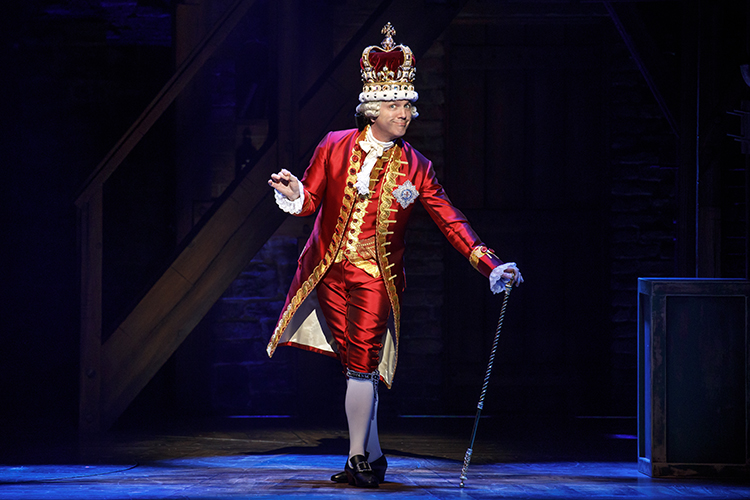 King George stole the show
His stage time was brief and his redeeming qualities were non-existent. Still, King George was an invaluable and just plain awesome component that made an already excellent show that much better. Neil Haskell’s variation of the monarch was even more bratty and petulant than that of original cast recording on standout songs like “You’ll Be Back.” Haskell’s especially snotty take on the crowd favorite paid comedic dividends every time he stepped on stage, and did a wonderful job of breaking up weightier material about war, death, and personal strife.

The set pieces were minimal, but used well
Hamilton did an admirable job of making the most of limited space. Part of what allowed them to do so were movable staircases, which made the transitions between scenes on the city streets, in the Hamilton home, at Alexander and Eliza’s wedding, in a hospital, at a battle ground, and in “the room where it happens” seem natural and believable. Also, the rotating floor was a major boon for the production.

Every history lesson should be set to music
As embarrassing as this is to admit, we actually learned quite a lot from last night’s show. [Historical spoiler alerts!] For example, we never knew Alexander’s son also died after being shot in duel…nor that duels were so common in the 1700s (which a song explains in quite thorough and entertaining fashion). We didn’t know Hamilton had a mistress and that her husband extorted money from him. We had no idea Aaron Burr was a U.S. senator and was a friend of sorts to Hamilton for many years. Apparently, Thomas Jefferson was also in France during the Revolutionary War. The show’s end also taught us that Eliza accomplished quite a lot of amazing things during her long, storied life.

Like most (maybe?), we came in wondering why the man who’s best-known for being on the $10 bill and never serving as President was worthy of a full-fledged musical. By the end of Wednesday night’s performance, we understood why Hamilton was made and we were thrilled to have witnessed it. 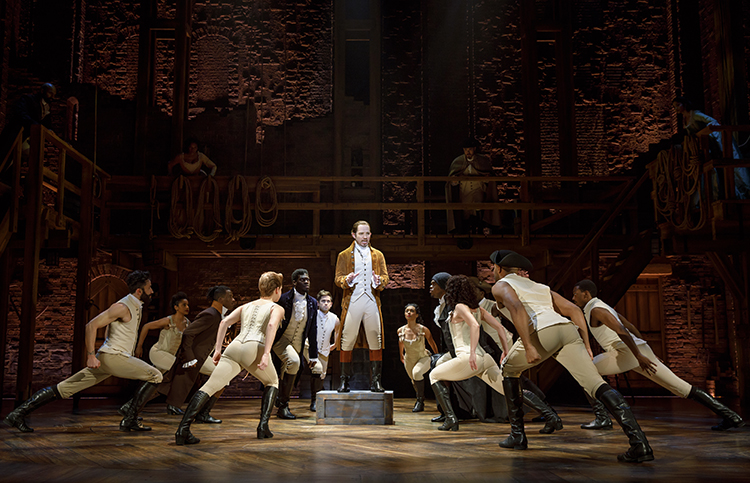