Editor’s note: The following piece originally appeared on brettnewski.com as “Why Shaquille O’Neal hates me.”

I was 13. We were on a family trip to Los Angeles to visit my Uncle Marcus. At the time, L.A. was home to 3-time NBA champion Shaquille O’Neal. Like many kids, I thought Shaq was the coolest human on the planet. He was funny. He was tall. And obviously, he could ball. Shaq was 7’1″. I wanted to be 7’1″ someday.

My uncle’s girlfriend had recently been released from an administrative role with the L.A. Lakers. She still knew the security guard and was able to get us into the Lakers’ practice facility parking lot before the team arrived.

We waited outside the doors with our pens and sports memorabilia like hungry puppies waiting to suck the sweet nectar from the teat of championship glory. It was just me and my little brother waiting for Shaq, our parents watching from a distance. Recently I’d watched all the subpar films starring Shaquille O’Neal (Kazaam, Steel, Blue Chips). I even wasted $4 of my parents’ money by renting his video game Shaq Fu, and another $12 on his rap album. I didn’t care if he sucked at rapping or free throw shooting. Shaq could do no wrong in the eyes of my 13-year-old head. This was the day I would meet Shaq. Here I stood, on the stoop of destiny in Los Angeles, California.

Sure enough, all the players came rolling in with pimp Cadillacs and oversized SUVs. They were all there: Rick Fox, known for his dashing good looks and marriage to actress Vanessa Williams; Horace Grant, known as a legendary role-player to Michael Jordan; and of course, Kobe Bryant, known by some as being better than Michael Jordan. They were friendly, signing our Lakers gear and posing for pictures. We met the entire team, minus Shaq. We couldn’t have missed him?

It was 7:59 a.m., just one minute before the start of practice. STILL NO SHAQ. Lakers team policy stated that players would be fined if they showed up late (something like $3,000). It was now 8:01 a.m. Shaq was definitely getting fined if he didn’t show up with a medical excuse from a doctor.

As time passed, my little brother and I began to lose hope. As we walked to the exit gates, a humungous Cadillac Escalade came trucking though the security entrance. We dashed back to the player entrance. THIS WAS IT. 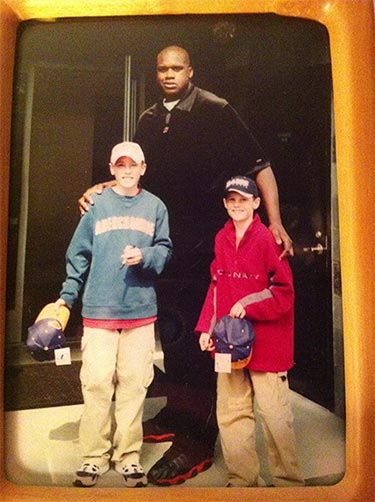 The Cadillac door opened. It was not Shaq, but a short black man in a shiny leather jacket. He looked hard as nails.

“What is this?!” he shouted at the security guard, pissed that two kid superfans would be delaying players entry. “They’re friends of the program,” replied the security guard, attempting to cover his own ass. Little kid NBA fans were not permitted on the premises.

Turns out this short man was Shaq’s body guard. Another dark silhouette lurked behind the passenger side tinted windows. The door clicked open. Shaq emerged from the passenger side door in a grey jumpsuit similar to those sported by Vanilla Ice in 1990. I was star-struck and scared speechless. I feared Shaq would be pissed for showing up late and getting fined. And he was.

I remember trying not to pee a dribble in my pants as Shaq approached my brother and I. He towered over us, casting a Godzilla-sized shadow on the parking lot. We were the only thing between him and the door. Shaq’s face was negate of smiles as his body guard bitched out security for letting us in. We shouldn’t be here.

I wanted to ask him questions, like why he let pop star Aaron Carter beat him in a game of one-on-one. How many backboards has he shattered? Did he take kung fu in preparation for Shaq Fu? I wanted to ask these things, but fear manhandled the muscles around my jaw. This was not the smiley, huggable Shaq of mainstream media. This was Behind-The-Glory E Hollywood Story Shaq. His giant eyes peered into the bottom of my soul as my inner dialogue said over and over, “Shaq hates me.”

I died a little inside that day, leaving the Lakers practice facility feeling gloomy for days. I had convinced myself of ruining Shaq’s day and costing him further fines from the Lakers franchise. But my 13-year-old heart would later learn to understand that my hero hadn’t let me down, he just hadn’t lived up to my expectations. There was truly a valuable lesson to be taken from this.

SET THE BAR LOW. An encounter with Shaquille O’Neal had been hyped up in my mind for years. Not to mention a young mind tends to magnify the fantastical elements. The bar was simply set way too high, and that garners expectations. Expectations are usually synonymous with crappy things like stress, pressure, and let downs. People don’t go to a Bob Dylan concert expecting him to sound like he did on the old records. The show would have a greater probability of sucking. It sounds pessimistic, but it’s just realistic. People shouldn’t order the “Perfect Push-up” from an infomercial and expect to get a Fabio six-pack of abs. But they do.

“Dream small” is the way to go. It sounds lazy, but it’s just vigilant. Shaq didn’t shatter my dreams, I shattered my own humongous, fragile dreams. Shaq probably dreamed of walking into practice unbothered, swishing a few free throws and dunking in some fool’s face. That is a small dream, an unshatterable dream that led the man to great success.

I don’t want anyone’s dreams to be shattered for anything. DREAM SMALL. You can’t control the dreams in your sleep, but you can control the dreams when you’re awake. They’re powerful and shouldn’t be tampered with. A dream can get a naked Beyonce into your bed, but it can also put Dracula underneath it.