From a distance, everything about King Gizzard & The Lizard Wizard seems like a gimmick: the goofy name; the preposterously psychedelic record and song titles; the album concepts (All the songs are the same length! All the songs run together in a continuous loop! Quarter-tone tuning!); and last year’s crowning stunt of releasing five albums in the span of 11 months. Yet unbelievably, none of those five albums sucked. The world’s most prolific band since 2012 or so seems to have an endless well of musical ideas ranging from decent to mind-blowing. They’re living proof that consigning oneself to a rigid artistic structure can serve to enhance rather than inhibit creativity. For their first-ever Milwaukee visit, the Australian seven-piece played to a sold-out crowd at the Pabst Theater Saturday night, and they were received like conquering heroes.

The place was already packed when opening act Amyl and the Sniffers took the stage around 8:30. Snarling Aussie punk that’s akin to what Cosmic Psychos’ first few rehearsals might’ve sounded like, there was nothing precise or polished about their performance, and it was invigorating. They even got a handful of fans in the pit thrashing around a bit. Vocalist Amy Taylor danced and pogoed and writhed on the stage floor and taught us all how best to insult someone if we ever find ourselves in her homeland. There was nothing original about the band’s sound, and nothing at all wrong with that. Rarely have we witnessed a weekend crowd so thoroughly engaged in the opening band’s set. 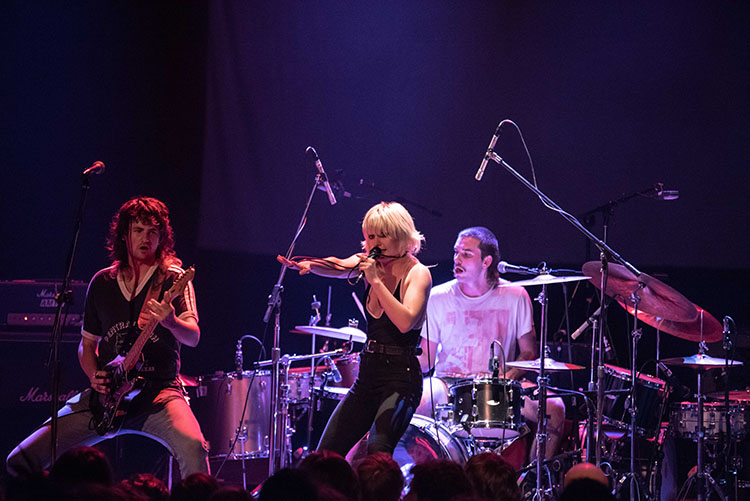 The headliners emerged and bantered nonchalantly for a minute before launching into “Rattlesnake,” probably their most-played tune on local airwaves. Its propulsive rhythm got the crowd on its feet and moving. Most King Gizzard songs aren’t so easy to dance to, but this one is in straight 4/4 time and irresistible. The setlist grouped songs from various albums together, drawing primarily from last year’s onslaught of material (excluding mellow jazz-ish offering Sketches of Brunswick East), but they occasionally referenced older stuff as well. Gizzard songs tend to run together on albums, and there are musical and lyrical motifs that appear across multiple releases. Adding to the band’s mythological puzzle, they like to toss song fragments in between and inside live jams, which included significant portions of “Cellophane” and “Hot Water” (from 2014’s I’m In Your Mind Fuzz) and probably others on this night, much to the delight of a sizable contingency of diehards in attendance. 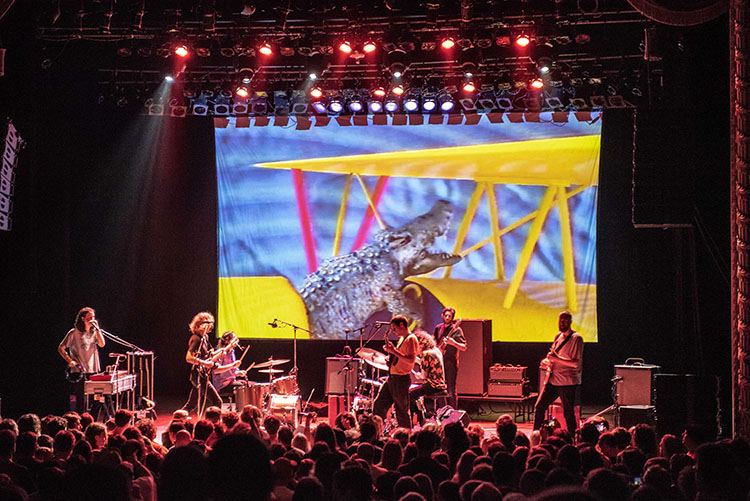 The meat of the set featured some of the band’s more dizzying, mathematical pieces. The dynamic shifts of “The Lord Of Lightning” were exaggerated to dramatic effect, and the polyrhythmic maze of “The Fourth Colour” was even more impressive when able to watch as drummers Michael Cavanagh and Eric Moore stayed perfectly in synch. There was a surprising amount of improvisation given the unorthodox rhythms and often serpentine compositions that Gizzard favors. Even played straight, there’s something to be said for complicated songs played expertly, and while Gizzard can justifiably be tagged as prog, they get too fast and noisy to embody the usual preconceptions that term evokes.

Following an exhausting trio of songs from Nonagon Infinity came the night’s biggest surprise: a stretched-out journey through “The River,” from 2015’s somewhat overlooked Quarters! album. The band cranked up the krautrock influence, turning the breezy tune into an intense, pulsing drone at times, fading almost to nothing in between sections. It brought to mind the heyday of dearly-departed local acts like Catacombz and Worrier, and that year or two when meditative psych/post-punk seemed to be gaining a foothold on the local scene. Maybe Milwaukee has been craving a resurgence in this style. You would’ve thought King Gizzard were local boys made good by the response they got. A hip, modern indie band that has the crowd on its feet the whole show, moving to the music, roaring in appreciation? Inconceivable! 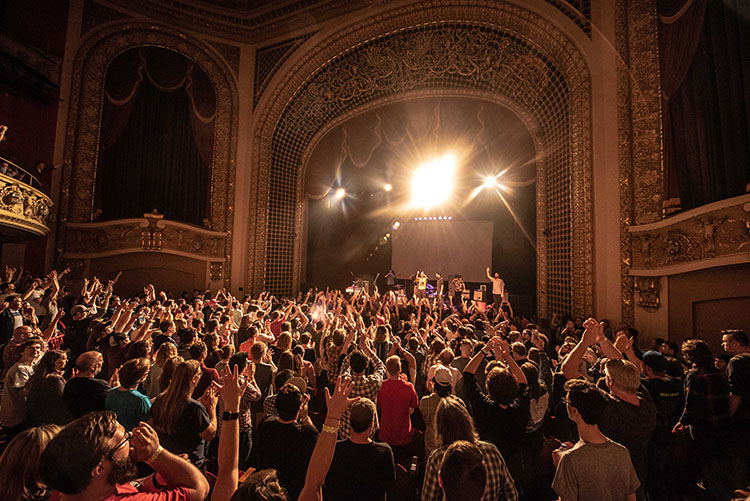