Sunday night, prior to singing her beautifully crafted interpretation of a 13th century French poem, English folk-artist Olivia Chaney discussed the idea of harboring nostalgia for something you’ve never had or experienced. Heavily steeped in traditional English folk music that travels as far back as medieval times, Chaney’s music is directly tied to that longing for a time and place that most of us have no real experience or personal connection to, making it all the more captivating. And captivate Chaney did on her first visit to Milwaukee, touring in support of her debut album, The Longest River.

This intimate performance, presented by the Pabst Theater Group, was the first show at The Back Room at Colectivo Coffee on Milwaukee’s East Side. The performance space, located in the back of the coffee shop (hence The Back Room moniker) is quite unique. There are garage-style sliding green doors that can be closed down to limit the performance space to a capacity of 50, but can also be opened up to create a room with a maximum capacity of 325. Sunday evening’s show was set up to hold a little more than a third of the maximum capacity, housing around 125 music lovers who filled the space quite comfortably. Rusted steel beams crossing the ceiling and cream-colored bricks gave the room an industrial feel. The standout features were the two large skylights, including one directly above the stage. The pseudo-cabaret style seating was arranged sporadically, with colorful wooden tables that seated four people each.

Not to be misinterpreted as a fourth venue for the Pabst Theater Group, The Back Room at Colectivo is to be viewed as another option for arts and entertainment in Milwaukee. Similar to the Miller Caves where John C. Reilly performed, or the Sara Bareilles show at the Milwaukee Rite Center, this new venue is geared toward more eclectic acts and intimate performances.

Sunday’s musical offerings began with Milwaukee-based singer/songwriter Hayward Williams. Well-known in the area and beyond, Williams began his set with “High Street,” the opening track to his latest album, The Reef, a staple on Milwaukee radio stations like 88.9 Radio Milwaukee.

Williams’ 40-minute set of country, folk, and Americana, mixed in with some humorous stage banter, set the mood perfectly for what was to come. His very American style of folk and country was a great contrast to the style of Olivia Chaney. While she did open her set with American folk traditional “Across The Blue Mountain,” her style and presence was very much English.

Aided by the violin and occasional harmonies of Jordan Hunt, Chaney’s set was stripped down and included her acoustic guitar, piano, and her prized Indian harmonium. Her show included much of what appears on her new album, including both covers and original songs. She included a gorgeous Chilean folk-song, “La Jardinera,” along with other, more exotic offerings like a Spanish lullaby and the previously mentioned 13th century French poem. Highlights of her original songs included “Swimming In The Longest River”—a lurid folk tale of the trials of living in denial—and “Blessed Instant,” where the mixture of Hunt’s violin and Chaney’s harmonium created a dark and menacing atmosphere. On piano ballads such as her United States-inspired “Too Social,” Chaney applied a contemporary twist to her music. But like so many great folk artists, she never ceased to tell a story in her songs. Her vocal delivery gently climbed to a peak and then descended just as gently as it rose.

When you hear songs like Chaney’s, you’re taken to another time in history, complete with the music, the stories, and the places that have come and gone before you. You get that sense of nostalgia that Chaney so perfectly described. But despite the fact that it’s something you may never have had or experienced, you feel like it’s yours. Like reading a great book, these songs have the ability to transcend your own reality.

This kind of music is not made for a stadium or sports arena. It’s for an intimate setting where the small crowd can share in the experience, and The Back Room at Colectivo was that place on Sunday night. Hopefully there are more nights to come. 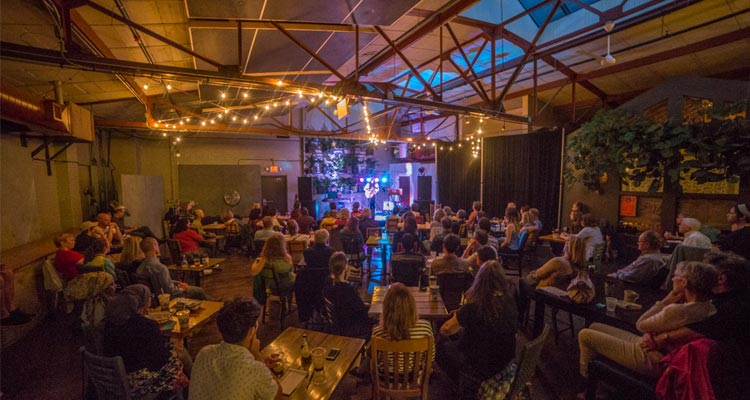