In a time when seemingly all recorded music is readily available, it’s easy to get lost in the flood of sub-genres and micro-genres. Law/Less are a punk band. Call them street punk, UK82, or whatever half-baked genre tag is popular this week, but at their core, Law/Less are punk. Nothing more, nothing less. Guitarists Chris Ellis and Mark del a Cruz provide a thick wall of melody. The rhythm section of Ryan Bollis and Lisa Quintero push the music with a propulsive low end. Meanwhile, vocalist Bonnie Chandek commands attention with intelligent lyrics and an undeniable stage presence.

In advance of tonight’s show at Quarters Rock ‘N Roll Palace with Pig’s Blood, No Funeral, and Desperations, Milwaukee Record ventured down to Law/Less’ practice space to discuss their short-but-productive tenure as a band.

MR: When did you start playing shows?

MR: That’s a quick turnaround. What are the highlights so far?

Bonnie Chandek: The show with Limp Wrist and Detenzione. That show was killer. I didn’t even know [After Gallery] was a venue.

MR: How did the lineup come together? There’s a lot of different crowds of people throughout the lineup.

CE: I don’t know man, we just all started being buddies and playing together.

CE: We all live in Riverwest, except for Bonnie. Mark and I used to be in Quitters. We used to play shows with Bonnie’s scene, or whatever, if that’s such a thing.

Lisa Quintero: I met him right away when I moved to Riverwest because he was at all the shows [laughs].

MR: It seems like you guys had a pretty strong band identity out of the gate. Not like you were marketing yourselves, but it seems like it wasn’t as scatterbrained as a lot of bands when they start. Was it just that everyone was on the same page?

CE: We would just text like, ‘Aw dude, this band is cool,’ back and forth to each other a lot. We all wanted to do UK82-inspired punk music.

LQ: …started listen to The Exploited a lot again [laughs].

BC: Also, for me, I haven’t really been in a band since I was 16 and it was super short-lived. My whole attitude was whatever happens happens. It might not even go anywhere. It might sound like shit, it might not. I just wanted to write some stuff and get it out there. Not having expectations was something we all agreed on. Does that make sense? Is that right or wrong?

CE: Yeah, I think that makes sense. Even though we’re all coming from different scenes, we’re all weirdos because of punk music. Because of that it’s easier to have an aesthetic or whatever. If you’ve been going to shows for a long time or been involved in music, you know what you want to see and hear. 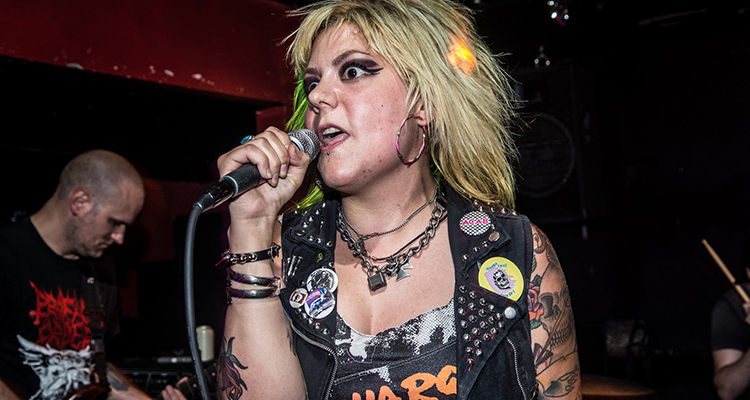 MR: Did you have any goals or things you hoped to get out of the band?

Mark del a Cruz: Go on tour. I want to be underground famous [laughs].

BC: I just want to make the scene better because it’s lackluster. I’m not trying to act like we are going to make it amazing or anything. I just think there needs to be more bands, more people who aren’t usually in bands.

MD: I remember Brett [Ames, drummer] from Asphyxiate, he was asking me about punk bands in the city that he could play with or bring down to Chicago or Indiana. I just named stuff he already knew, the mainstays, like Holy Shit! He said ‘It sounds like you should start a band.’ And that’s totally what I was trying to do.

LQ: When I first moved here everything was grindcore and I thought it would be cool to see a punk band…be in a punk band again! I think it’s cool being in a band with people from different scenes because it brings in different people to shows that we play. We all bring our friends.

MR: It gets kind of boxed in when a band is just people from one scene. That’s how people get burnt out, because it’s the same people watching the same bands over and over again. It seems like that happened a lot in Milwaukee for a long time. Who writes the music?

MD: I feel like I’ve written zero so far.

BC: Mostly me and Chris write riffs. We bring them to the practice space and we flesh them out together.

CE: Lisa wrote most of the new song. I think everybody does. [Mark’s] had ideas, we just haven’t hashed them out. Ryan has a song we’re going to work on soon. So yeah, I’d say everybody.

MR: What about lyrics?

BC: That’s me and Chris.

MR: How do you approach lyric writing? There’s no shortage of topics emerging every day.

BC: I try to think about the structure of the song first, if possible. I do free writing a lot of times. I will just write some weird poetry shit or whatever and the whole time I’m hating it. I try not to think about it, though it never feels good. Afterwards I read it and see what I really like and ditch what I hate and then I rearrange it. It seems to work so far. I definitely have topics that I want to talk about. I’m consciously ruminating on everything all the time, so I never have a shortage.

MR: Was “Fight or Flee” written to be the closer?

CE: No. It just worked as one. There’s that marching drum part. We tried it and at first thought it was funny and we weren’t actually going to do it but ended up really liking it. I think [Bonnie] hated it the most.

MR: Sometimes that’s the best way. In a band, things often come out of dumb jokes. Any future plans? Tours or records?

CE: We want to tour and put out records. Nothing’s set in stone. We did get invited to play a fest next summer in Vancouver. We might try to do some touring around that. We have to work out the logistics because it’s pretty fucking far to drive. We have to figure out if it’s a flying scenario. Then we would have to make sure we got some decent-paying shows.

BC: I think we just need to focus on writing more stuff, which we are doing right now, which is good.

CE: I would like to write more stuff. I’d like to re-record the songs that are on the demo. I would like to record an additional demo or another tape. Hopefully someone will just offer to put a record out for us and we won’t have to worry about it.