From Static Eyes to the Catholic Boys, Mistreaters, and onward, Milwaukee has a strong continuum of garage rock bands injecting a heavy dose of punk into their sound. Brain-Bats are a relatively new Milwaukee quintet making an eerie garage punk racket. As guitarist Gian Pogliano notes, they like to play “fast, loud, and weird.” With each member applying their own distinct style to the songs, Brain-Bats’ sound has many layers to dissect.

The band’s roots lie in two similar projects existing parallel to each other. Guitarist Mike Thompson and synth player James Clemente jammed in Thompson’s basement while Pogliano and former Burning Sons vocalist Dillon Hallen independently conjured up a similar muck. “When [Mike] and I were originally jamming, my main influences were The Mummies and the Lost Sounds, but I think that’s changed quite a bit since that original inception,” says Clemente.

“We wanted to do something darker and heavier than the Lost Sounds,” Thompson adds.

While the duo woodshedded in Thompson’s basement, Pogliano and Hallen crafted songs influenced by the first Wall Of Voodoo album. The lineup was completed by ferocious drummer Cortez Macachor. “I’m kind of an aggressive person,” says Macachor. “We played a show a few months ago and I broke eight drum sticks in one set.” 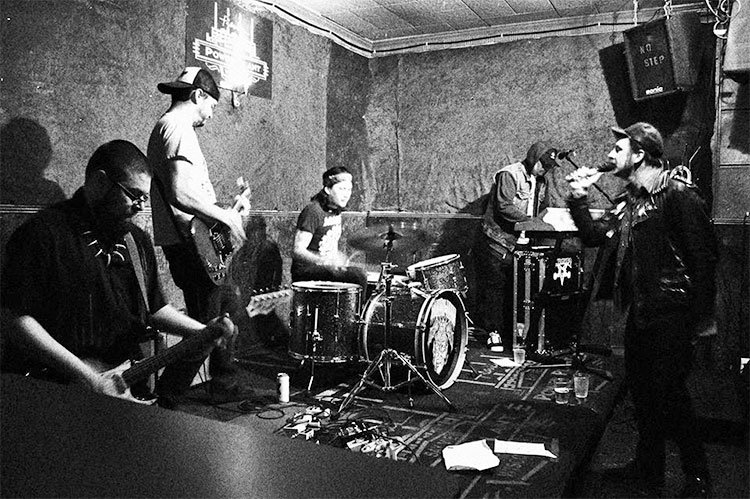 In a somewhat rare move, the band skipped the usual stepping-stone of releasing a demo tape and jumped straight to vinyl. The newly released two-song seven-inch (“Road Kill From Outer Space,” “Night Terrors”) is a self-released affair. “It’s easier for us to do it than to get someone else to do it,” says Hallen. “This way we have control over everything.”

The recording session, produced by Shane Hochstetler at Howl Street Recordings, was made up of five songs. With only two of them making it to the record, Brain-Bats showed an awareness that often eludes young bands. “There’s a lot of quality control in the writing process,” says Pogliano.

To celebrate the release of their debut seven-inch, Brain-Bats set up a show at Third Ward retailer Hot Pop. “The woman who runs the place has always been cool to me. I sold [Wicked Vibes] comics and postcards there,” says Hallen. “Unfortunately, they are closing at the end of August, so we thought we would play there as a last hurrah.”

The record layout is something to behold. All four panels are covered with the eye-popping art of underground comix legend XNO. After the band tracked the famed illustrator down, Hallen “corresponded with him through letters and over the phone.” The two sides had spent a little time discussing ideas for the record sleeve when XNO proposed a question to the band. “In a Southern accent he was like, ‘Y’all want some titties on that?'” says Hallen.

“He went to town on the titties,” Clemente adds. 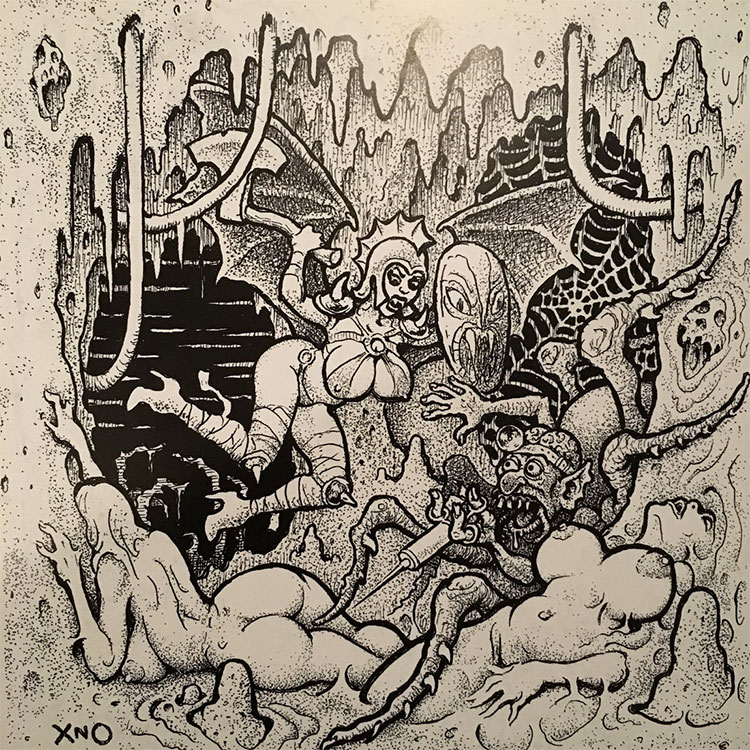 In 2010, Fantagraphics Books released Newave!: The Underground Mini Comix Of The 1980s, which featured the XNO mini comic Brain-Bat. (The Brain-Bat name was borrowed from a Basil Wolverton comic strip.) To tie the band to the comics, Pogliano says, “It’s not a ’50s Tales From The Crypt sort of thing. It’s a bit more 1980s and aggressive. More aggressively weird.”

Discussing their time as a band, the members of Brain-Bats name a unanimous high-water mark: the 2016 Bay View Bash. “We’re totally indebted to [Rushmor Records’] Dan [Duchaine] for that, because we probably weren’t ready for it, but we were like, ‘We’ve got to pull it together for this,'” says Thompson. Discussing his memories of the day, Pogliano remembers “the endless procession of people stretching down KK.” Hallen, however, has the most vivid memory of the day:

“I had the shits the whole fucking day at the street fest. I had to shit so bad, in the heat, and I was trying to find some baby powder or something. I could barely walk my ass was so chafed. Finally we found this baby powder and I’m just going to town and someone walked in on me all bent over, sweaty, spreading baby powder on my ass before we had to go on stage. There’s a video of us playing. If you watch, you can tell from my movements I’m in pain.”

As Brain-Bats prepare for the release of their debut vinyl offering—decorated with the art of a legendary illustrator—they have held on to their modesty. “Our first goal is to try to get out of town and play other cities,” says Clemente. Hallen reiterates, “Get out of town, have fun with friends, and maybe get some beer money out of it.”

There are no delusions of grandeur with Brain-Bats, just a group of friends trying to have fun while making something unique. “I think we’re all interested in the idea of being in a band that doesn’t sound like any other band in town,” says Pogliano. “I think that’s something that a lot of people aspire to, to do something different and see how well it works.”

Brain-Bats will celebrate the release of their debut seven-inch Saturday, June 24 at Hot Pop. The show begins at 8 p.m. 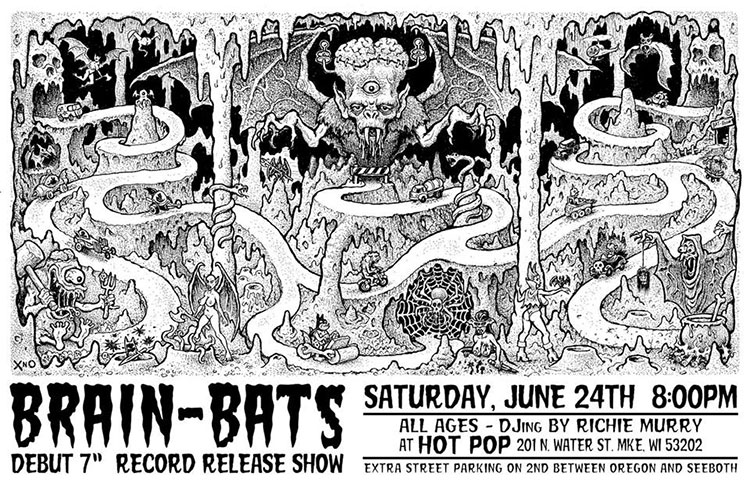