To know the work of Dan Schierl is to know a collection of oddities, rooted in a deep respect for the archives and archival process with a strong penchant for the ridiculous and absurd. As a musician, Shierl creates noise music under the name Dan Of Earth by building new, homemade circuits every time he wants to put a new set together. While some of these circuits come from his own design, he often recreates and modifies parts of other devices including the arpeggiators from the original Moog synthesizers and boutique pedals like the 4ms Noise Swash, housing each inside a hollowed out Bible. As a DJ for Riverwest Radio, Schierl also hosts “In The Field,” a radio show dedicated to field recordings. Tune in on Saturday nights to hear everything from audio recordings of exotic locales to a buoy that sits a mile off the coast of Lake Michigan recorded from land with an iPhone.

But the most ridiculous off all his projects may be the Generic Dr Pepper Knockoffs Facebook page. Started in May of 2017, Schierl has meticulously chronicled more than 30 generic forms of the soda, with brands coming from as far away as California and Connecticut. While just posting a photo of the generic brands may be enough for some, Schierl provides detailed review of each and every knock off, pouring over everything from the taste and smell to the viscosity and graphic design of each in-house varietal. It’s far more insightful of a review than anyone probably needs (going as far as to publish the ingredients list), but it’s the extreme close-up that provides the true joy of reading the page. It’s an almost obsessive archive of something overtly mundane, but also pretty ridiculous when you think about it (why are there so many knock offs of Dr Pepper? And why are they all named after doctors?).

To get a better understanding of the story behind the page, Milwaukee Record sat down with Schierl to discuss the origins of the project, his wildest experiences with Dr Pepper Knock Offs, and the unexpected social value of this work.

MR: Why did you first start obsessing over generic Dr Peppers? And why are you interested at all?

DS: I grew up in a little town that had two mom and pop grocery stores, and I don’t think either of them had big commercial brand canned food or anything, It was all ‘Our Family Brand’ beans and corn and stuff. It wasn’t until I moved away that I went to a town that had regular chain products. I was always fascinated by that relationship between the generic products and the actual products, that commercial products had to spend money on advertising and that brought the price up whereas, with the generic stuff, it just had to kind of look sort of like the commercial version. It didn’t have to pay for advertising or anything like that, so it could charge a lot less.

Later on, I spent a couple of years as a field engineer and I had to travel a lot for jobs that would always make me pull my hair out. The thing that was keeping my sanity, because I would always end up somewhere like the middle of Missouri or Nevada, was going to the nearest mom and pop grocery store and finding a Dr Pepper knock off I had never seen before. It was kind of like a stress reliever.

MR: What is it about Dr Pepper knock offs in particular? There’s a lot of other generic products out there to obsess over.

DS: As far as Dr Pepper goes, even though it’s kind of a crazy flavor made up of 23 other flavors and they won’t tell anyone what they are, you’d think by now somebody would have figured it out and made an actual thing that tastes just like it. But nobody seems to be able to get it right. That’s the thing that fascinates me, how not right some of them get it.

DS: I think it started out because there were memes going around where people had collections of different cans from different clones. But I wanted to know more about those. I thought it would be amusing to write about them. Writing about colas, no one cares, but Dr Pepper is odd enough that people will read that.

MR: The reviews are also really in-depth, getting into a lot of the details on each brand. Is there a reason you dig in so far on each review?

DS: When there is a thing to be interested in, there are two approaches into that thing: you can be really enthusiastic and when you tell people about it, it gets them interested in it. Or you can be a snob about it. And I really hate that. I’m amazed at what people find to be snobby about. It’s what killed my love of record collecting, actually. I never had the right Roxy Music album or the right pressing of that correct album, so I eventually said to hell with it. I’m just not going to collect records anymore. Since I consider anything you can be snobby about to be kind of dumb, I figured I would become a snob about something really pedestrian. I think when you’re kind of snobby about something, the underlying thing you’re trying to say is “well, I just spent a whole lot of money on this brand of guitar or this car or this bottle of wine.” So I decided to be a snob about something I can spend $2.39 on for a 12-pack. So I think I was making fun of wine enthusiasts.

MR: So do you model the writing off of wine reviews?

DS: I don’t think I was doing it on purpose, but it definitely headed in that direction. I started asking myself, “What can you say about a Dr Pepper knock off?” And I thought, “You could apply the same criteria!” The smell, the initial flavor notes, the aftertaste. With wine being a, quote unquote, “natural product,” they go for a natural taste palette to compare wine to. Notes of chocolate, mushrooms, et cetera. I don’t think there’s anything natural in Dr Pepper, so I kind of went with other unnatural flavors to compare it to, like butterscotch candy or circus peanuts.

MR: Yeah, there are definitely a few touchstones that you return to over and over again.

MR: Are there any knock offs that stand out to you?

DS: There’s a knock off I picked it up in a Safeway in Lincoln, Nebraska that was completely different from any other knock off I had tasted. It tasted like an RC Cola with Angostura bitters in it and instead of smelling like one of the two principal smells, it smelled like a cinnamon-scented marker. So that was the only one that stood out as an outlier. That was definitely the strangest one. The first time I tasted it, I couldn’t believe what I was tasting. Someone had a really weird idea of how to simulate the Dr Pepper taste. 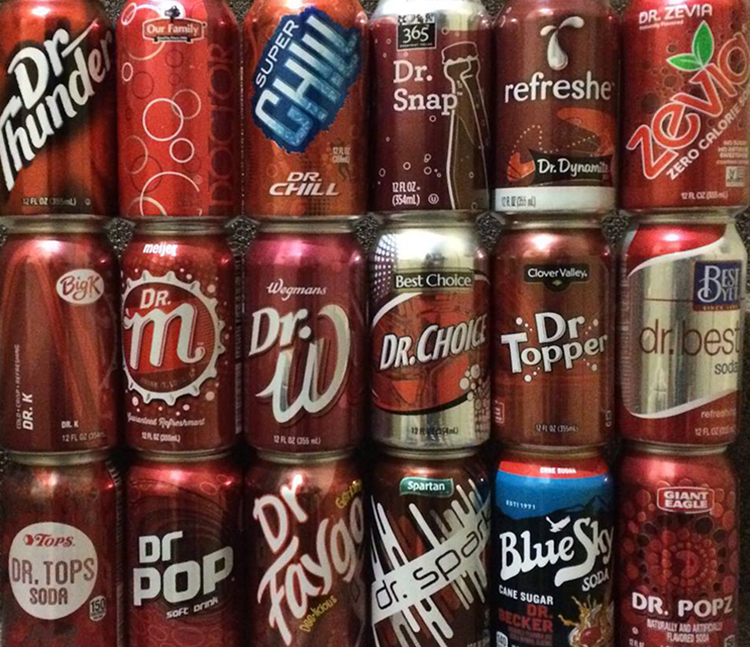 MR: So what do you see moving ahead with this project?

DS: One thing that I think is going to start happening; it used to be that there were small generic chains all over the country, and I think they’re slowly being gobbled up. And so even five years ago, as you traveled across the country you would see Dr A and Dr Bold and Dr Pure. I think we’re going to start seeing less and less of them. Like here in town with Pick & Save, their house brand was Roundy’s and they had Dr Storm. But Kroeger bought them. So Dr Storm is out the window and now it’s Dr K. And when you go to Indiana, you also get Dr K. As Kroeger’s and other big chains spread, a lot of those little brands will go away. If you go somewhere in the middle of Arkansas, you should be able to go to the only grocery store in town and find a knock off that you had never heard of before. But it’s probably going to be Wal-Mart and it’s going to be the same Dr Thunder you get here. It may get a little hard to find new brands as the chains get bigger and eat up the little guys. I never set out for that but, thinking about it recently, I’ve realized that some of the brands I had been looking for when I started aren’t there anymore. We’re preserving the state of knock offs right now as they are. We’re keeping tabs on the state of the art, as it were.

MR: Any requests for readers that might want to help the project out?

DS: If you think you have something new, drop me a message via the Facebook page and let me know what you’re seeing in your town. Especially if you don’t see it on the page. If you look at the cover photo, it contains what we all have so far. So if you got something in your town that you don’t see in the picture, get in touch and we’ll figure something out. I’ll either road trip to you or we’ll figure something out- maybe FedEx or something. I don’t think you can U.S. Mail that stuff very easily. I’m always interested in what’s going on in different parts of the country.

Also, I say this every couple of months, but if anyone has an Ingles grocery in their town, get in touch, because somebody drank my Dr Lynn can. Those header photographs are going to be one can incomplete until I can put Dr Lynn back in the bestiary. 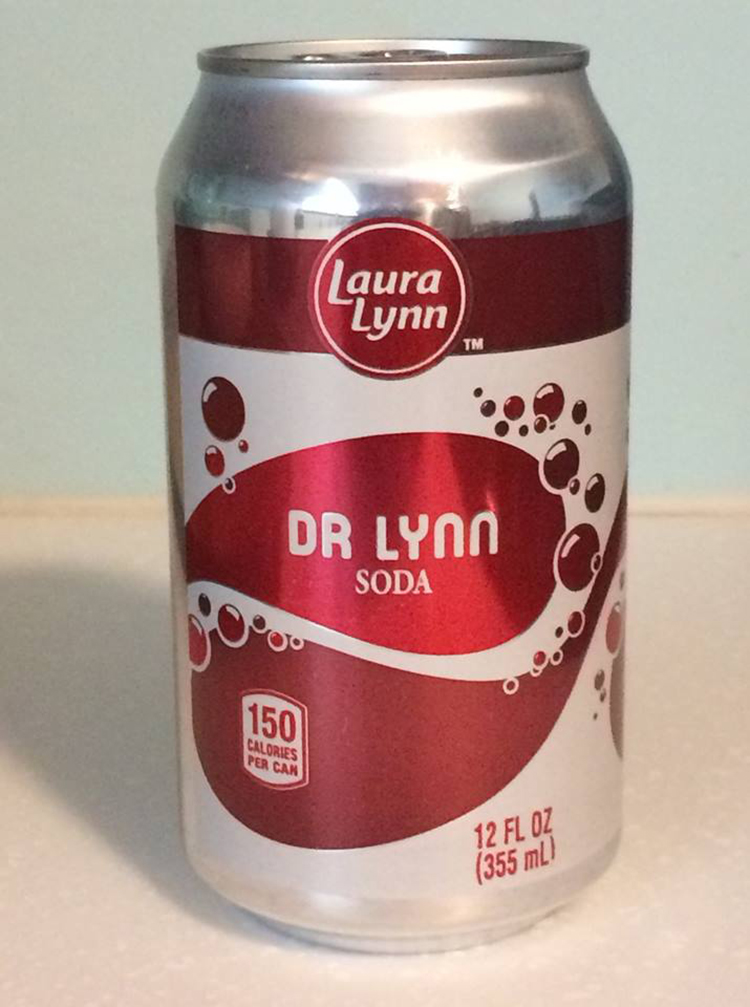