When one thinks of things that are quintessentially Milwaukee, both Summerfest and fish fries are likely to come to mind. Similarly, when one thinks of New York City, it is not a stretch to have Paul Simon pop into your head. After all, he did write “Bleecker Street” and “The Only Living Boy In New York,” and once filled Central Park with 500,000 people at a concert with Art Garfunkel. Not only are these things emblematic of their respective cities, they are representative of America as a whole. Food and music cut across political, racial, and class lines, and unite us in times of seeming fragmentation. This was what was on my mind as I headed off to get a fish fry and see Paul Simon at Summerfest on the heels of the 4th of July.

According to the Summerfest website, there are three places on the grounds that have a fish fry: Saz’s, the Venice Club, and Ward’s House of Prime. At first I had the idea that I would try to eat all three fish fries for dinner, so I apologize for letting myself and everyone else down by not doing that. I ended up at the Venice Club, a place I had never been to before, which was also the only place of the three where it was listed online that their fry was only available on Friday. I had been to the brick and mortar location of Saz’s before, and Ward’s had their fry listed as “Fish & Chips.” Being that this is Wisconsin, not England, that helped steered me away. The Venice Club was an Italian restaurant in Milwaukee from 1947 until 1983; then it moved to Brookfield, where it remained until closing in 2014.  However, it has had a presence at Summerfest since 1974, and that has continued to this day. 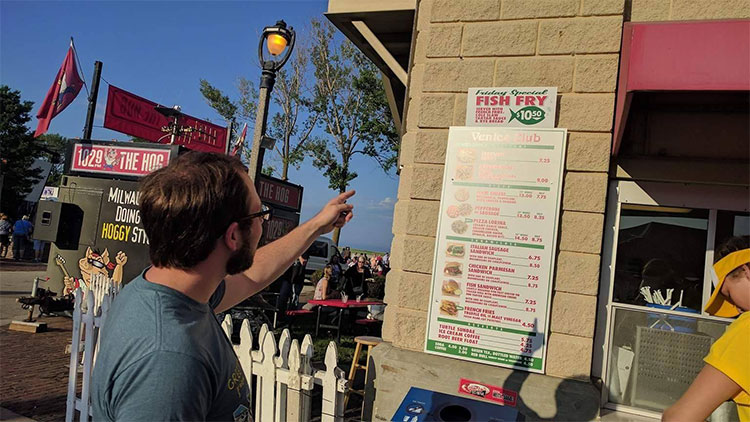 As I picked up my fry from the counter at the Venice Club, I looked down and noticed I hadn’t been given any rye bread. After I was given some I started walking away and looked down again and then realized I hadn’t been given any coleslaw either! I was told, “I think you may be our first fish fry,” which I am hoping was a joke, as it was already getting close to 7 p.m. I met my cousin who was getting his fry at the next counter over, and as we started to walk I pointed out to him that he also hadn’t gotten any coleslaw! After we double- and triple-checked that we had everything, we made our way to buy $7.50 beers, which almost cost the price of a single fish fry itself, which was $10.50.

The fry came on a styrofoam plate with two rather small pieces of fish, which had hints of lemon and flaked well. Overall the fish was average and there wasn’t anything special about it. The coleslaw also was unmemorable. The fries managed to be both soggy and limp and sort of burnt at the same time. Finally, the rye bread was just a small roll. I do think it’s commendable that a place would make a fish fry available at Summerfest, and being that I was at a music festival and not a restaurant, I expected the fry to be about what it was. If you are looking for a fish fry at Summerfest, this will get the job done, and I’m guessing the other two places will as well. 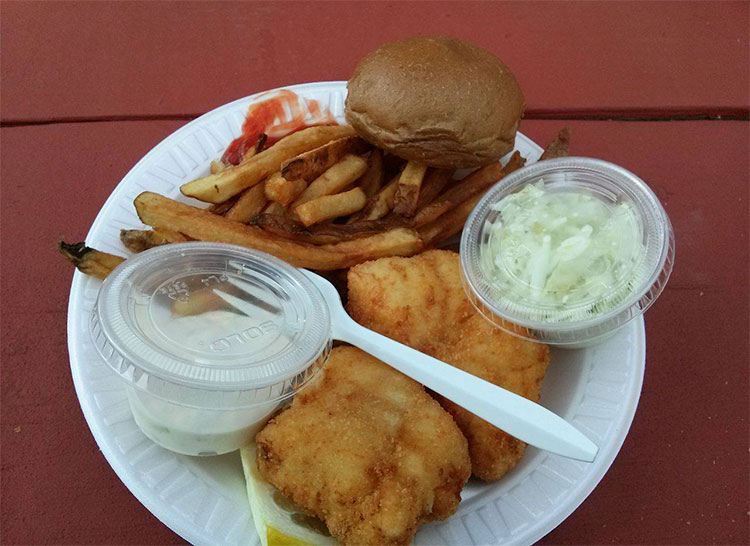 As for Paul Simon, he culled songs from his whole catalog—from his Simon & Garfunkel days, from Graceland and The Rhythm Of The Saints, and from his more recent albums. He even played my favorite of his, “Duncan,” which I like for more reasons than that it mentions chowder. His voice is still supple, his presence is spry, and his baseball hat and blue jeans illustrate his everyman persona, which has endeared him to a wide audience for over a half century.

As he closed with a moving acoustic rendition of “The Sound Of Silence,” he called for us to take on anger and solve problems with a “communal calm mind.” Maybe that’s something to think about during this 4th of July week. And maybe if we just dance a little more to the music, and eat a few more fish fries together, we have a chance at setting this topsy turvy world right side up again. That’s right, it’s patriotic to eat fish fries, and doing so might save the world.

Rating: Small portions, mediocre fish and coleslaw, lackluster fries, it’s at this sweet festival though and if you pay an extra $77 you might get to see Paul Simon after eating. 2 out of 5 stars.