Back in October, a galaxy-full of Star Wars fans descended on the Internet, Death-Star-trench-run-style, to buy advance tickets to Star Wars: The Force Awakens. I was not among them. Instead, as untold millions snatched up tickets to see the film in stadium-seated multiplexes (perhaps—shiver—in 3D), I sat back and relaxed in the knowledge that I would be seeing the film at Milwaukee’s storied Oriental Theatre. Advance tickets wouldn’t be necessary. Like most Oriental screenings, I’d simply show up, buy my ticket, plop down in a good old-fashioned, non-reclining seat and enjoy the show. Let the rest of the galaxy drive out to the ’burbs and deal with assigned seats, dim projectors, distracting food service, and bozos on their phones: I’d be seeing the new Star Wars at one of the best movie theaters in the city, if not the country.

Well, at least I hoped I would be seeing it there. The East Side theater doesn’t get many big-ticket mainstream blockbusters, but it usually gets the biggest and most mainstream-y. I had seen the theatrical re-releases of the original Star Wars films at the Oriental back in the late ’90s (let’s forget, for a moment, the “special” parts of those “special” editions), so I had no reason to doubt the theater wouldn’t be snagging the new one. Imagine my delight, then when I discovered that not only would the Oriental be screening Star Wars: The Force Awakens, it would be screening it around the clock, for 24 hours. Want to see a new generation of characters (and filmmakers) take the Star Wars franchise to new heights at 7 p.m.? Get in line and go for it. Want to wait until, say, 4:15 a.m. the next morning for some reason? Have at it, weirdos.

So yeah, I totally saw Star Wars: The Force Awakens at the Oriental Theatre at 4:15 a.m. and it was glorious. I was not alone: To my surprise, there were at least 50 other night-owls/crazy-people lined up for the chance to walk out of a movie just as the sun was coming up. Some of them showed up in costume. Some of them clearly hadn’t slept (I managed to get in a few hours the night before). One guy was dressed in a Santa suit for some reason and kept asking everyone for a smoke. Others were just getting out of the 1:15 a.m. screening and were calling for Uber rides. Still others seemed to be there because, like me, a.) they were Star Wars fans, and b.) seeing a film at 4:15 a.m. sounded like a funny thing to do. 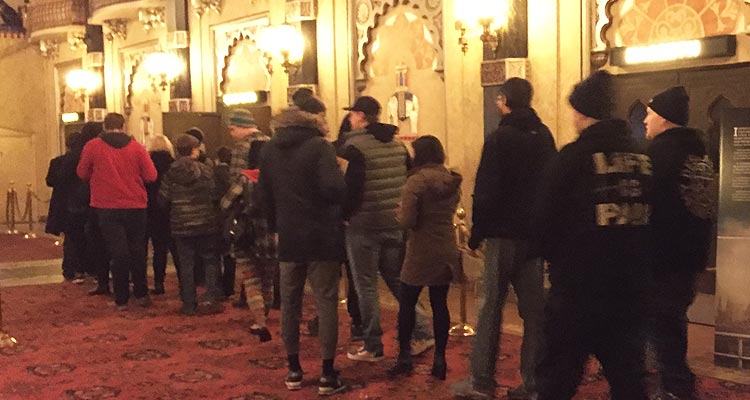 So, what’s it like seeing a film at such an ungodly hour? Shockingly similar to seeing a film at any other time, it turns out. Other than the Oriental graciously providing a “no-ticket” parking zone and some of the staff donning bathrobes, the 4:15 a.m. screening of Star Wars was your run-of-the-mill screening of Star Wars. People bought popcorn and soda. They said stuff like, “I can’t believe it’s finally here!” as they sat down. They cheered when the John Williams score blasted forth from the sound system and the opening crawl made its way across the screen. They cheered when it was over. They likely passed out 20 minutes later. Me? I cheered along with them. Walking out after the film and seeing the sun rise felt like a dream, which seemed fitting. 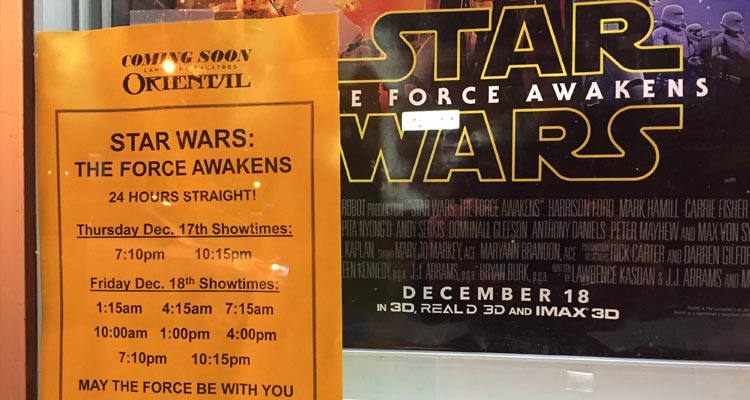