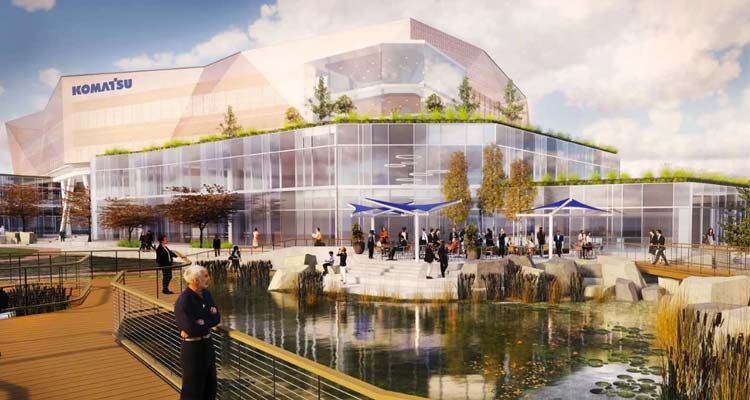 In case you blinked last week, here’s all the new shit they’re building in Milwaukee (Sept. 23-29)

• The big “new shit” news last week was the announcement that Komatsu Mining Corp. will build a $285 million headquarters and manufacturing facility at the former Solvay Coke site in the Milwaukee Harbor District. In exchange for $59.5 million in state income tax credits, and $25 million from the city, Komatsu will build “170,000 square feet of office space, a 20,000-square-foot museum and training building, and 410,000 square feet of manufacturing space,” and create 443 new jobs. The massive project, which will combine Komatsu’s existing National Avenue and Honey Creek operations, is expected to be complete by 2022. [BizTimes]

• Oh yeah: In addition to the $25 million incentive package, the City of Milwaukee will provide Komatsu with $15 million to construct a public river walk along the site. [Milwaukee Business Journal]

• Oh yeah pt. 2: The current owner of the Solvay Coke property, Wisconsin Gas, will get back $7 million for work it has already done on the site. [Milwaukee Business Journal]

• That Riverwest hostel is almost a thing. Developers Juli Kaufmann and Carolyn Weber have raised a cool $900,000 to convert a former bank at 500 E. Center St. into a 53-bed hostel. An additional $100,000 is needed to make the project a reality. [Urban Milwaukee]

• Mandel Group is moving forward with plans to build a 20-story, 176-unit high-rise apartment tower at 1350 N. Prospect Ave. The project, dubbed “Portfolio,” has been in the works for years, and is expected to finally break ground in 2019. [BizTimes]

• Cristo Rey Jesuit High School wants to transform a former Pick ‘n Save at 1818 W. National Ave. into a new campus. The project could cost between $20 million and $25 million. [Milwaukee Business Journal]

• New Land Enterprises developers Tim Gokhman and Ann Shuk are planning to buy an empty lot on the 2300 block of N. Terrace Ave. and build three single-family homes there—two for them, and one for someone else. [Urban Milwaukee]

• Midwest Refrigerated Services will convert a former Target store at 8501 W. Brown Deer Road into office and warehouse space. The building has been vacant since 2016. [BizTimes]