For readers of a certain age and sensibility, Edgar Cantero‘s Meddling Kids will go down as easy as a bowl of sugar-choked cereal on a Saturday morning. In the summer of 1977, a group of Scooby-Doo-esque teen detectives—Andy, Peter, Kerri, Nate, trusty dog Sean—crack their biggest mystery yet, exposing the infamous Sleepy Lake monster for what it really is: a guy in a mask trying to get his hands on the treasures buried beneath old Deboën Mansion. But something doesn’t sit right; thirteen years later, the so-called Blyton Summer Detective Club reforms to put to rest lingering doubts about the case. Lovecraftian horror, pop culture panache, and slapstick set pieces all figure into an animated romp about growing up, letting go, and the inherent dangers of the Necronomicon.

On Thursday, June 14, Cantero will appear at Boswell Book Company for a chat with Milwaukee Record‘s own Matt Wild (that’s me). Before then, we spoke to the author via email about nostalgia, Scooby-Doo, and confronting demons both real and imagined.

Milwaukee Record: Meddling Kids takes place in the “present day” of 1990, as a group of now-grown friends revisit a case they originally tackled as children in 1977. Was this timeframe intended as a “double-dip” of nostalgia, or did the math just work out that way? Why not move the dates up to something like 2017 and 2004, for example?

Edgar Cantero: There’s two factors there, I think. One is that my favorite decade, aesthetically, is the ’70s, so I chose 1977 for the BSDC’s idealized past, and adding 13 years lands you on 1990. The second factor is that I avoid setting my stories in the present because I still haven’t figured out how new technology plays out in horror fiction (I bet today you’d be able to download the Necronomicon from The Pirate Bay), and things change so fast that I fear a story set in 2018 will look old in 3-4 years anyway. By setting it in 1990, we all agree there’s no cell phones and no internet, and I don’t need to do research. So 1990 it is.

MR: Scooby-Doo is an obvious inspiration for the Blyton Summer Detective Club, yet you’ve said your original inspiration was a series of books that American audiences may not be as familiar with, The Famous Five. What was it about The Famous Five that intrigued and inspired you? What were your other inspirations (Lovecraft is a big one)? 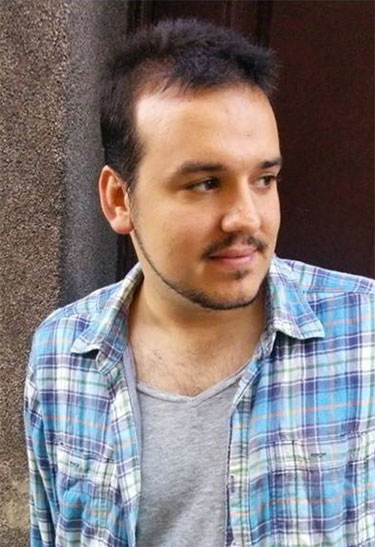 EC: George Kirrin, the tomboy in the Famous Five, was the character I was interested in seeing as a grown-up (also, I wanted my detectives to start as kids properly, not teens old enough to drive). Thus George was the inspiration behind Andy Rodriguez. The other members of the BSDC don’t have such close one-to-one equivalences; their models were not specific characters, but archetypes. Peter is your typical letter jacket alpha; there’s one like him in every teen hero squad. Kerri came to fulfill two roles: the bookworm and the danger-prone princess—Velma and Daphne from Scooby-Doo. Tim is a dog and dogs are awesome, so he needs no other reason to be there.

Nate is an odd case, because his archetype (a beta male?) is really vague. His role was defined once I’d decided that the novel would contain a criminal plot and a paranormal plot, which would require both a scientist and a wizard. Before I reached that conclusion, I was very close to dismissing Nate altogether.

MR: You’re also a cartoonist, and some of the action in Meddling Kids seems to play best when imagined as a cartoon (and early escape scene involving a “reverse werewolf trap” comes to mind). When you were writing the novel, how did you picture your characters? As live-action people? As Scooby-Doo-esque cartoons?

EC: I always picture it as live action in the movie theater inside my head. I find it very helpful, having a clear picture of the characters in my mind—a face, a voice. Once I realized that an adult George Kirrin with PTSD could only be played by Michelle Rodriguez, Andy wrote herself. In fact, Michelle Rodriguez is the reason Andy is Latina.

MR: There’s a lot of fourth-wall breaking in Meddling Kids, including passages where dialogue suddenly shifts into a script format, or when you refer to “cutaways” and the book’s “cast.” What was your thinking behind these techniques?

EC: The switching to script technique is not new to Meddling Kids; I was already using it in my last novel in Catalan, Vallvi (2011). It’s a matter of agility: when I want dialogue to sound like rapid fire, the script format makes it read faster, without all the “he said, she asked, I retorted” in the middle. I know it alienates some people, but I think it’s a legitimate trick: as long as you can write it, you’re playing by the rules. And I’ll resort to any trick like that to make the narration stand out. I don’t want to just describe the action coldly, like a computer would; in fact, I’m obsessed about making every line sound special, to make sure not only that the story is interesting, but that the way I tell it is also interesting, not just a neutral chronicle of interesting events. Fourth-wall breaks are another such trick.

MR: One of the early surprises of the book is that the supernatural is real. In 1977, the characters caught a man in a mask, but now, 13 years later, they’re clearly up against something more. Why did you decide to make the supernatural elements real things?

EC: There was little argument about that. I needed the child detectives to come across something that traumatized them. Sure, I could have made them stumble into a serial killer’s human skin workshop or a ring of sex traffickers, but that kind of “ooh-edgy” grittiness is HBO’s tea; I’ll never go with “truly dark” if I can choose “otherworldly colorful” instead. And I always wanted to write a Cthulhu Mythos book.

MR: Ultimately, Meddling Kids is about growing up and finding closure for past wounds. Was this always your intent? It’s a surprisingly heavy theme to attach to a riff on Scooby-Doo (though it’s to your credit that it ends up working so well).

EC: Personally, I think MK, in a way, is about resisting to grow up. Think about it: the real driving force in the novel is Andy, who at 25 has noticed that she was only happy when she was 12. She had friends, she had a girl she liked, and she was doing something she was good at. And she has totally idealized that period. You see it in the way she speaks about Blyton Hills; to her, it’s like Kerri’s bedroom has healing powers. (After all, if darkness is real in her world, light should be too; if Sleepy Lake is a dark spot in the world, Kerri’s room can be a bright one.) In the end, this embellished memory of her childhood is so powerful that it makes her confront her demons and fight back for what they lost that crucial night in 1977. So is she growing up, or is she trying to be 12 again?