With headliners like The Lonely Island, Brandi Carlile, T-Pain, GGOOLLDD, Jason Aldean, and a novelty performance by Styx for good measure, Friday was arguably the most stacked night of Summerfest 2019. Though many were faced with a difficult dilemma about the best way to conclude their night at the Big Gig, the choice of 5:30 p.m. entertainment should’ve been an easy one. You should’ve watched The Beths.

Even though Summerfest included The Beths in the festival’s Emerging Artists Series at the Johnson Controls World Stage, the band has already made quite a name for itself in its native New Zealand. Following the release of last year’s incredible Future Me Hates Me, word is quickly spreading to the northern hemisphere. Friday, the pride of Auckland treated a respectably-sized audience to a fun 45-minute run through its breakout record during an endearing evening performance.

After coming out to a surprisingly nice reception for a young group playing its first Milwaukee show, the indie rock quartet kicked things off with energetic Future Me opening track, “Great No One,” which they quickly chased with “Little Death.” Between songs, singer-guitarist Elizabeth Stokes quipped to the growing festival crowd, “I heard this thing’s, like, two weeks long. Good luck.” Though the non-musical interactions were minimal, they were light and ultimately worthwhile. At one point, every member introduced themselves, each finishing with “…and I play [instrument] in the band The Beths.” Later in the set, bassist Benjamin Sinclair looked back at the banner that was emblazoned with the name of stage’s corporate sponsor and asked “Well, what does Johnson really control?” 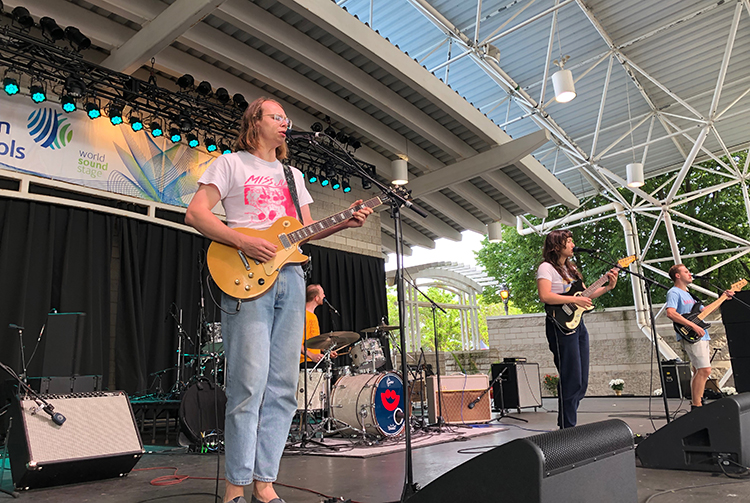 However, the majority of The Beths’ stage time was spent playing true-to-album renditions of Future Me Hates Me cuts. Stokes’ outstanding and inimitable voice led the way, as her band mates joined her for some delightful four-part harmonies on songs like “Whatever” and the infectious Future Me title track. Along the way, they worked in “Idea/Intent” from the band’s Warm Blood EP and a group of people converged in front of the stage eagerly supplied the hand claps for “You Wouldn’t Like Me” without needed to be prompted to do so.

By the end of the quick-but-enjoyable set, Johnson Controls was full of folks who were decidedly won over by the “emerging” band from Auckland, New Zealand. Hopefully the love is mutual and they make their way to Milwaukee again soon. There were lots of great ways to finish Friday night at Summerfest, but The Beths were far and away the best way to start it.

SET LIST
Great No One
Little Death
You Wouldn’t Like Me
Idea/Intent
Whatever
Less Than Thou
Happy Unhappy
River Run: Lvl 1
Future Me Hates Me
Uptown Girl