Since 1987, Gerry’s Diamond Tap—a Bay View gem that was relatively hidden on the quiet corner of Logan and Lincoln avenues—was a quaint and character-laden South Shore dive where a diverse selection of neighborhood patrons could enjoy bar snacks and dirt cheap drinks while watching a game. The bar closed in the summer of 2013, only to re-open a few weeks later, before permanently closing less than a year after that. By the end of this summer, Tonic Tavern owner Paul Jonas plans to renovate and return the corner bar atmosphere to 939 E. Lincoln Ave. with his second Bay View bar, UC Jonas’.

Having observed the city’s collective interest in sports first hand at his musically-oriented Kinnickinnic Avenue establishment over the course of Tonic’s near-six-years of existence, Jonas officially purchased the Lincoln Ave. fixer-upper on April 15 with the intent of giving his existing clientele and new customers a relaxing place to kick back, socialize, and watch a game.

“It’s almost impossible to have a bar in Milwaukee without having the Packer game on Sundays,” Jonas says. “It doesn’t matter what the theme of your bar is. You’re going to have an empty bar if you don’t have the Packer game on.”

Beyond servicing a new customer base and retaining the ability to keep Tonic’s artistic and musical motif intact, Jonas wanted UC Jonas’ to honor his father, who passed away shortly into his first bar’s existence, by making his dad (a Milwaukee County Golf Hall Of Famer whom the bar owner calls “a really good athlete”) the place’s namesake. That said, Jonas says he isn’t setting out to open a full-on sports bar.

“It will be a pretty chilled out spot. It won’t be 12 TVs blaring at all times,” Jonas says.

Of course, his assessment of the establishment is mostly speculative at this point, as he’s presently in the midst of extensive renovations he hopes will be completed in time to open sometime in July. The ongoing interior changes include gutting the place, moving and expanding the bathrooms, “bumping out” the bar a few feet and moving it slightly southeast, putting bench seating along the walls surrounding a hanging fireplace in the back room, and installing 12 to 15 tap lines (up from Diamond Tap’s mere three).

“I think we’re going to orient this more towards craft beer and try to keep more beer on tap [than Tonic]. I don’t have the option at Tonic because I only have eight lines and no basement,” Jonas says.

Respected and award-winning bartender Paul “PK” Kennedy will move from his post at Tonic to focus on UC Jonas’ full-time. Though the property’s new owner admits he’d never been to Gerry’s Diamond Tap while it was in business, Jonas is confident in the tucked away tavern’s inherent appeal, and isn’t concerned that it’s a bit off Bay View’s beaten path.

“I’m not too worried about that,” Jonas says. “I think there’s some definite advantages to this space. Being the only one on this corner, there’s nobody else taking up any of the parking spots.”

UC Jonas’ is projected for a mid- to late-summer open. Check back for updates and/or a First Impression post in the coming months. 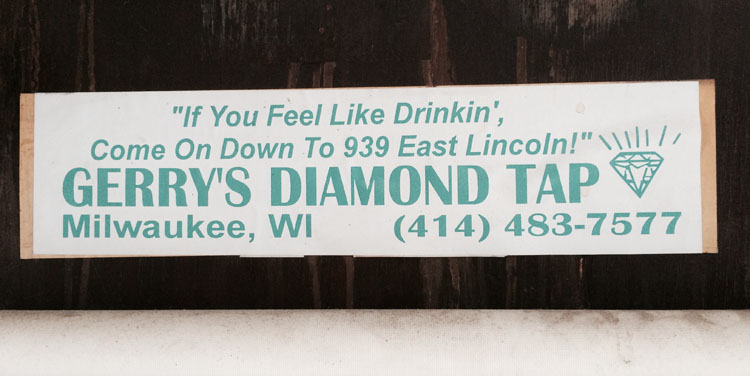