It’s still summer, but it’s never too early to start thinking about the Milwaukee Film Festival. The 2018 installment—the festival’s 10th—is set for October 18-November 1 at the Oriental Theatre (now under the stewardship of Milwaukee Film), Avalon Theater, Times Cinema, Fox-Bay Cinema Grill, and a pop-up cinema at Kenilworth Square East. More than 300 films will be screened and oodles of events and conversations will be held. Plus, the fest falls over Halloween this year, and we may or may not have something spooky in the works…

But never mind that now—let’s take a peek at MFF2018’s wonderful campaign art! Created by MIAD graduate and Shepherd Express illustrator/designer Melissa Lee Johnson, the artwork features a “dollhouse”-style depiction of life in, according to Milwaukee Film, “a fictional, aspirational Milwaukee neighborhood.” There’s more than a passing resemblance to the East Side, too: a bowling alley, a yoga studio, and a raccoon lurking by a dumpster all make appearances.

“Our goal for this campaign is to celebrate the diverse audiences who enjoy our films and the diverse community we call home,” says Milwaukee Film, “starting with imagery of families and home (allowing for many interpretations of what constitutes family), and gently expanding to include portraits of beloved facets of our community, ultimately culminating with an image incorporating both the home and community aspects into a large portrait of a city neighborhood.”

Also of note: Johnson and her boyfriend make cameos in the birthday party scene, and there’s a pink unicorn on the roof. Eat your hearts out, Wes Anderson and your niece or nephew’s kiddie art class.

Festival passes and ticket 6-packs to the 2018 Milwaukee Film Festival are available now. 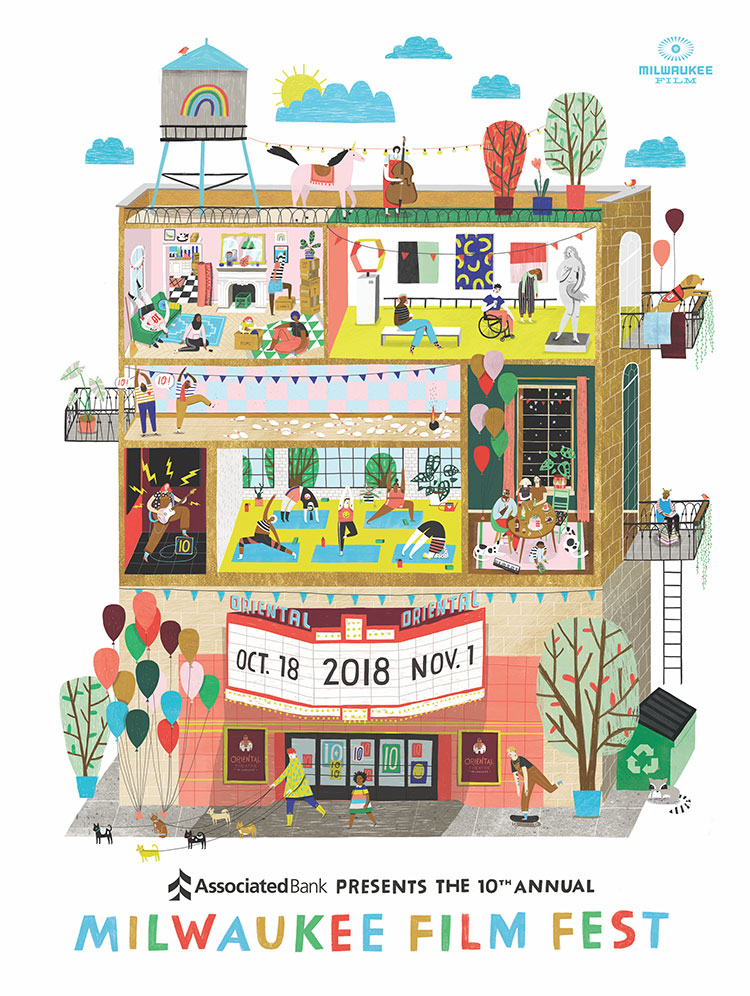