If you were brave and bundled-up enough to attend one of the many, many cool events going on around town this past New Year’s Eve, our hats are off to you. You are a truly hardy Milwaukeean! If you were not, did you watch Dave Chappelle’s two new standup specials on Netflix, and did you happen to catch the little piece of Milwaukee in the front row of the audience in “The Bird Revelation”? The set was recorded this past fall in front of a relatively small audience at The Comedy Store in Los Angeles. It’s a much more intimate setting than the sites for Chappelle’s other recent specials: the Hollywood Palladium, Austin’s Moody Theater, and Washington DC’s Warner Theatre. As a result, the special features a lot more shots of the audience from a short distance, including several shots of a woman wearing what appears to be a Brew City Brand “Beers&Brats&Bowling&Bubblers” T-shirt. 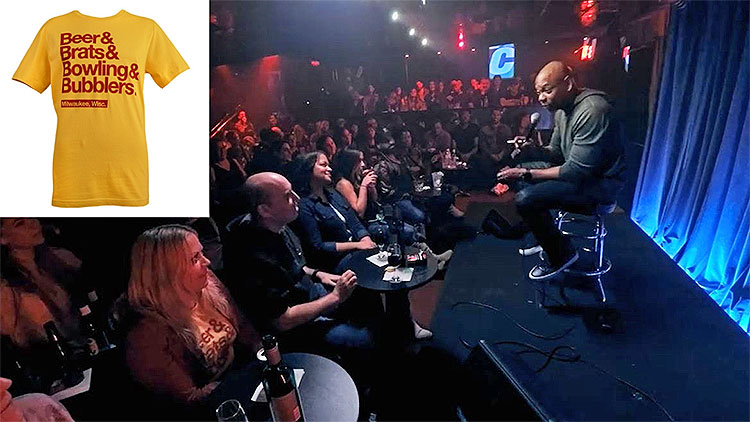 Are we dorks to be delighted at the mere appearance of a Milwaukee-related item on an internationally viewed piece? Possibly. Will the widespread exposure of the shirt’s message cause others to finally start referring to drinking fountains as “bubblers”? Hopefully. Do we hope that you will proudly wear a Milwaukee Record T-shirt or onesie the next time you appear on a Netflix special, provided it’s not a special where you’re doing something awful? Yeah, that’d be awesome.