In the late hours of Thursday night, where neither the distractions of the day nor the burden of self-awareness could find purchase, a man who wears cowboy hats called a woman who wears cowboy hats a “buffoon.” And “whacky.” Former Milwaukee County Sheriff David A. Clarke, Jr.—who abruptly resigned from his post in August—grunted and tweeted this whopper out about Rep. Frederica Wilson, D-Fla.: 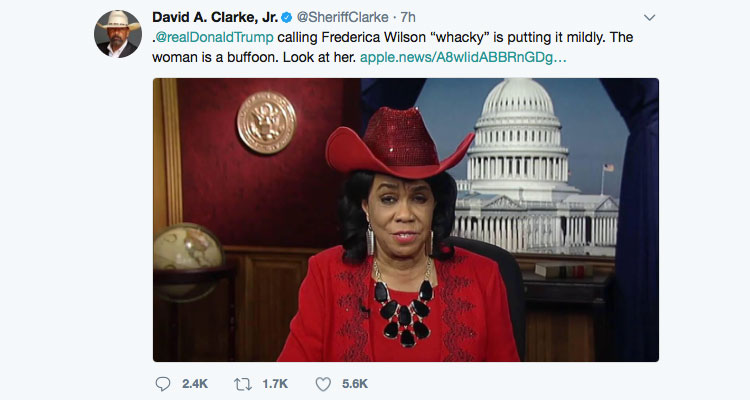 Wilson is an employed congresswoman who has been in the middle of President Donald Trump’s feud with the Gold Star family of Army Sgt. La David Johnson, who was killed in action October 4. In a tweet Thursday night, Trump called the cowboy-hat-wearing Wilson “wacky.” Clarke, meanwhile, is a former county sheriff, longtime cowboy hat-wearer, and current Twitter user who spells “wacky” with an “h.” He’s also shilling for a pro-Trump super PAC these days. Fuck this guy.