After finishing the Netflix series Making A Murderer last month, Milwaukee comedian Ryan Holman had an idea for a joke.

“I remember that I had a key chain that looked kind of like the one in the show,” Holman says. “I just thought it would be funny. The whole thing hit me, how I’d write it.”

Placing the key chain resembling the one discovered—or planted, depending on who you ask—by Manitowoc County Sheriffs in Steven Avery’s trailer beside a pair of his shoes, Holman snapped a photo and posted it on his Instagram account, with a joke about it being immediately found by sheriffs. Roughly a month later, that photograph and the accompanying joke have been viewed and shared by millions of people. It’s been referred to as one of the funniest memes made in the wildly popular docu-series’ honor by both noted national and international publications. It’s remained a fixture of the #MakingAMurderer categories on Instagram, Twitter, Imgur, Facebook, Reddit, and every other viable social media site since the meme’s creation.

Having a joke reach so many people on so many platforms is an incredible means of exposure for an aspiring stand-up comic. At least it is when the original source gets credit for it. Ryan Holman didn’t. 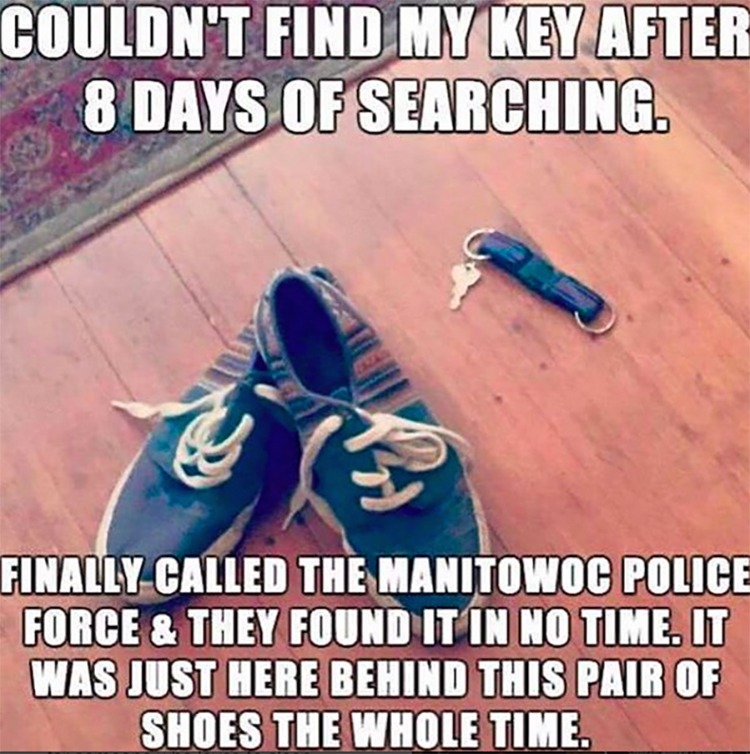 Someone (or some people) wrote the crux of Holman’s joke on the photo he snapped, posted it online without attribution, and started it on its way to going viral, as it steadily pushed ever deeper into public consciousness on numerous sites by a building wave of people—few of them aware of or concerned with who originally created it.

“At this point, it’s all over the place. It’s such a weird, silly area because I feel silly for wanting credit, when I really shouldn’t feel that,” Holman says. “I do think it seems kind of petty, but as a comedian who writes jokes, you want to have some credit for the joke that you made.”

New York-based reporter Kate Briquelet—an Oshkosh, Wisconsin native and former Milwaukee Record contributor—might understand how Holman feels. After developing a crush on Avery’s defense attorneys Dean Strang and Jerome Buting, The Daily Beast writer used a phone application to whip up an innocent valentine featuring the lawyers surrounded by terms like “Girl Crush” and a cascade of hearts in order to show “how everyone on the Internet was behaving” after watching the series.

“A couple people liked it. Nobody really noticed when I first posted it,” Briquelet says. “All of a sudden, everyone started retweeting it and it went totally bonkers.”

Within a week of being tweeted, Briquelet’s collage found its way to actors Dax Shepard and Kristen Bell before being displayed on network news and various online articles, including the front page of Daily Beast competitor Buzzfeed.

“I started to see Kristen Bell’s name in all these articles with the picture and everyone thought that they made it,” Briquelet says. “After it started to take a life of its own, I started to feel like I had no control of it anymore. It’s just something I made and put out into the atmosphere.”

Briquelet confronted Shepard about his use of the meme without providing credit. The actor claimed he and his spouse were sent the image by someone else and they were unable to trace it back to its initial source. He even sent her screen shots from his phone to justify his claims.

“This isn’t high art and I don’t expect royalties or anything like that,” Briquelet says. “I’ve never made something or set out to make something that would go viral and appear on CBS morning news and every single news website ever, so basically, I’m just learning to let it go.”

Holman, too, attempted to locate the initial perpetrator, the patient zero responsible for exposing his work to so many. Given the popularity of the meme, the search ultimately proved to be futile. On January 7, he posted a revised version of the shoes meme to his social media accounts, this time with a watermark displaying his handle and an explanation of what happened. At the time this article was posted, it has amassed just 65 likes on Instagram.

“I feel like it’s so weird and nerdy to try and get credit for what you did in this day and age,” Holman says. “I’m kind of in this middle ground. I don’t want to sound like, ‘Oh my god, that’s my joke! Give me credit for my joke!’ but at the same time, I made a joke that’s been shared a million times around the country. It’s my picture and it’s just kind of floating out there with no credit.”

For Briquelet, a self-proclaimed “lonely journalist in New York City” with no aspirations for a career in design nor entertainment, getting credit seems secondary to the knowledge she created something that’s making people happy. However, she was admittedly puzzled to see her valentine had inspired a design by SweetAmbs, a gourmet cookie company with close to two million Facebook likes, that was posted on Tastemade’s Facebook page (nearly eight million likes). The video showing the “Dean and Jerry cookie crush,” and has already been viewed close to three million times since being posted January 16. 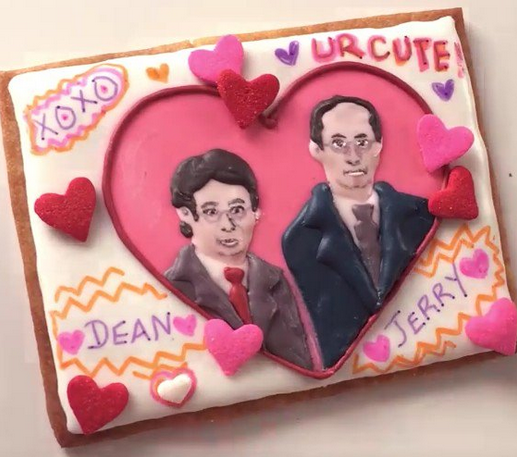 “There’s tons of memes out there and it’s not like we know who created them. There’s not a copyright stamp next to the picture,” Briqulet says. “I’m really happy that other people saw it and took joy in it, but I don’t want it to spread to the point where people start monetizing it. I just thought it was a cute little graphic, but I hope someone doesn’t use it to make a buck.”

These days, the breakneck speed in which the Internet moves in its ongoing effort to churn out the next topical rendering and feed its reference-hungry populace seems to make the concept of credit secondary, if not altogether unnecessary. Unless enough slighted parties band together against a common force (as comedians did last year to acknowledge joke thievery by Josh “The Fat Jew” Ostrovsky after Time Magazine called him “one of the 30 most influential people on the Internet”), memes will continue to be hastily piled on the heap with seemingly no urgency for author or artist acknowledgement.

At this point, it’s impossible to determine the first person to use the term “bae,” figure out who coined the term “broke the Internet,” or know exactly whose hand is inching food ever closer to TV screens showing Ryan Gosling before the actor turns away. It’s probably more likely that we’ll sooner get the name of the cat starring in the pet meme du jour than the person who shot the photo or typed the accompanying text. At the height of the Making A Murderer craze, two people with Wisconsin ties and different motivations added to the conversation. While their contribution to the conversation has been repeated, shared, and referenced millions upon millions of times, few people will ever know where it started. And with the collective conversation bound to move to another topic in a matter of days, it seems as if few people will ever care.

“I do get that the Internet is a lawless place where most people who are sharing aren’t passing it off as their own,” Holman says. “The thing is, in like a week, it’s going to go away and not matter anymore.” 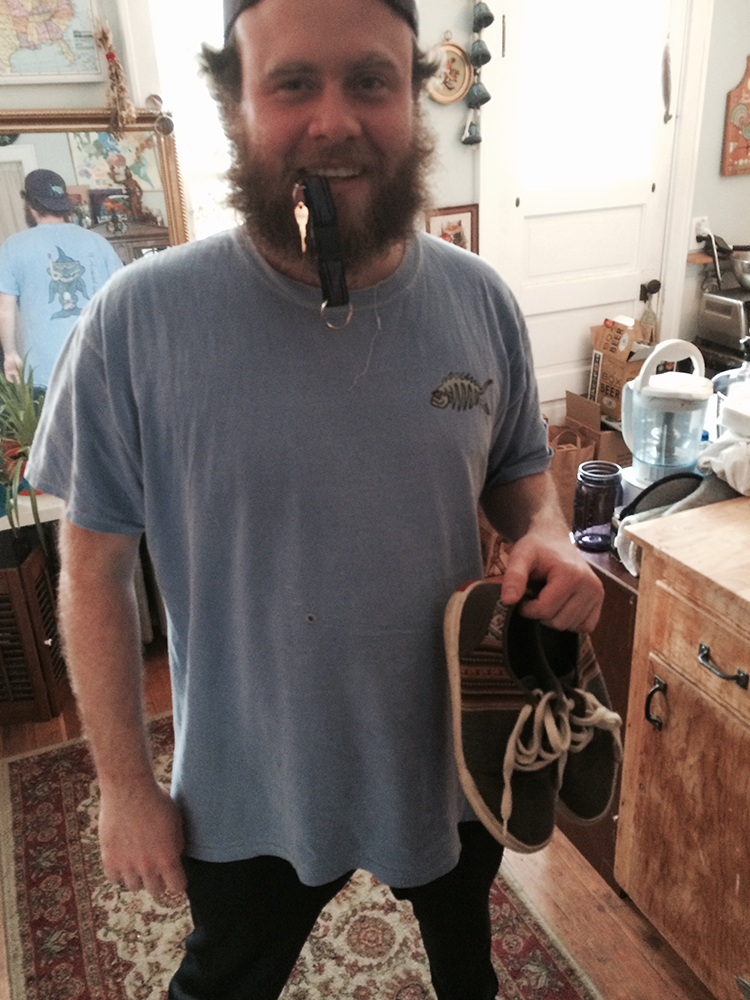