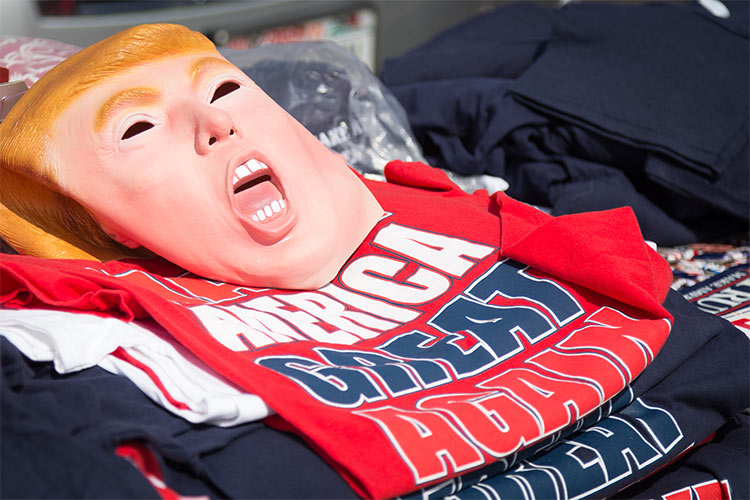 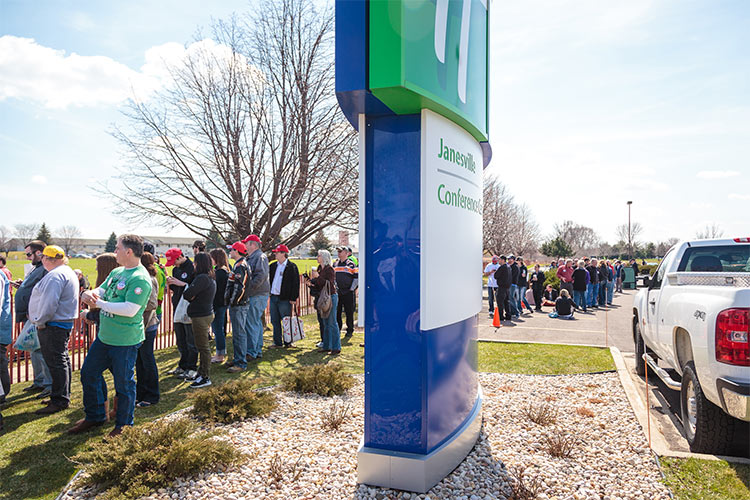 Presidential candidates were running every which way through the state on Tuesday: Sanders was at the Wisconsin State Fairgrounds, Clinton was cruising through La Crosse and Green Bay, Kasich and Cruz arrived in Milwaukee for a CNN Town Hall session at the Riverside Theater with Anderson Cooper. Trump would join them later, but not before making a pit stop in Janesville. Thousands of Trump supporters, a couple hundred protesters, and hundreds of police showed up at the Janesville Conference Center (attached to a Holiday Inn Express). It was sure to be the most exciting rally in Janesville since that time in 1992 when Geraldo Rivera showed up at a white power rally and punched a Nazi. 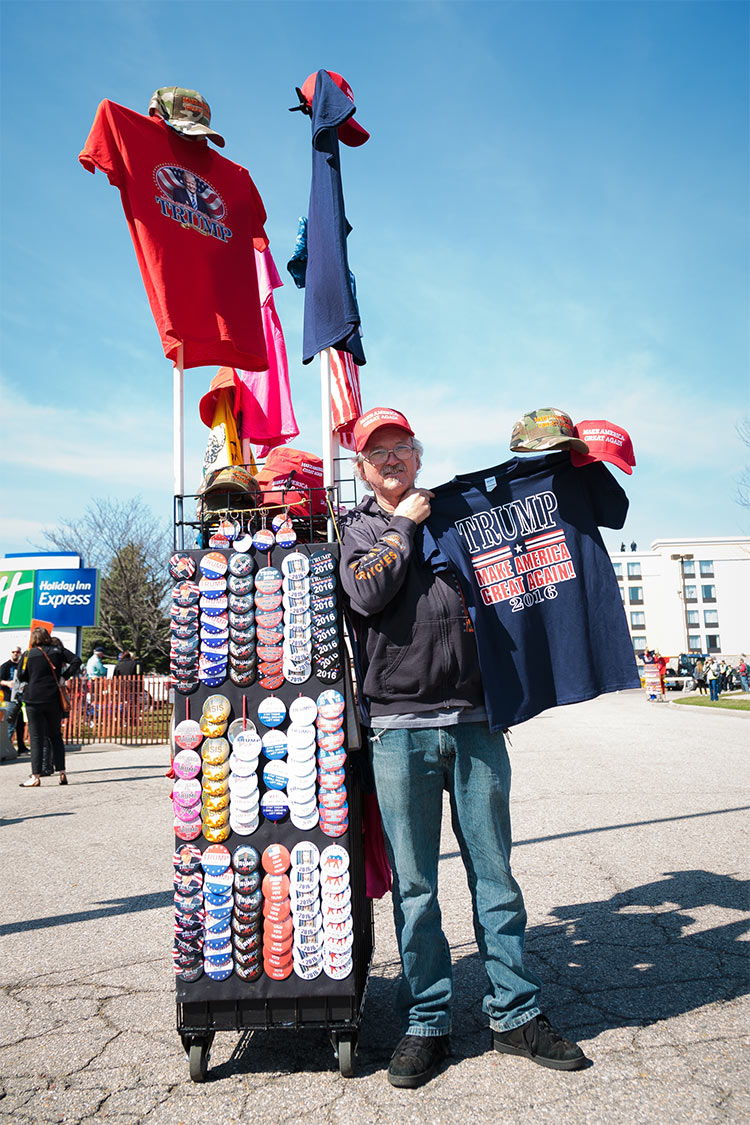 The rally also attracted a cottage industry of Trump paraphernalia vendors, many who travel from Trump rally to Trump rally selling buttons, shirts, and hats. This guy told us his hottest item was the famous red “Make America Great Again” baseball cap. His bestselling button was one that read “Bomb the Hell out of ISIS” with an explosion in the background. Also selling well: “Hot Chicks for Trump 2016” and “Trump 2016: Finally, Someone with Balls!” 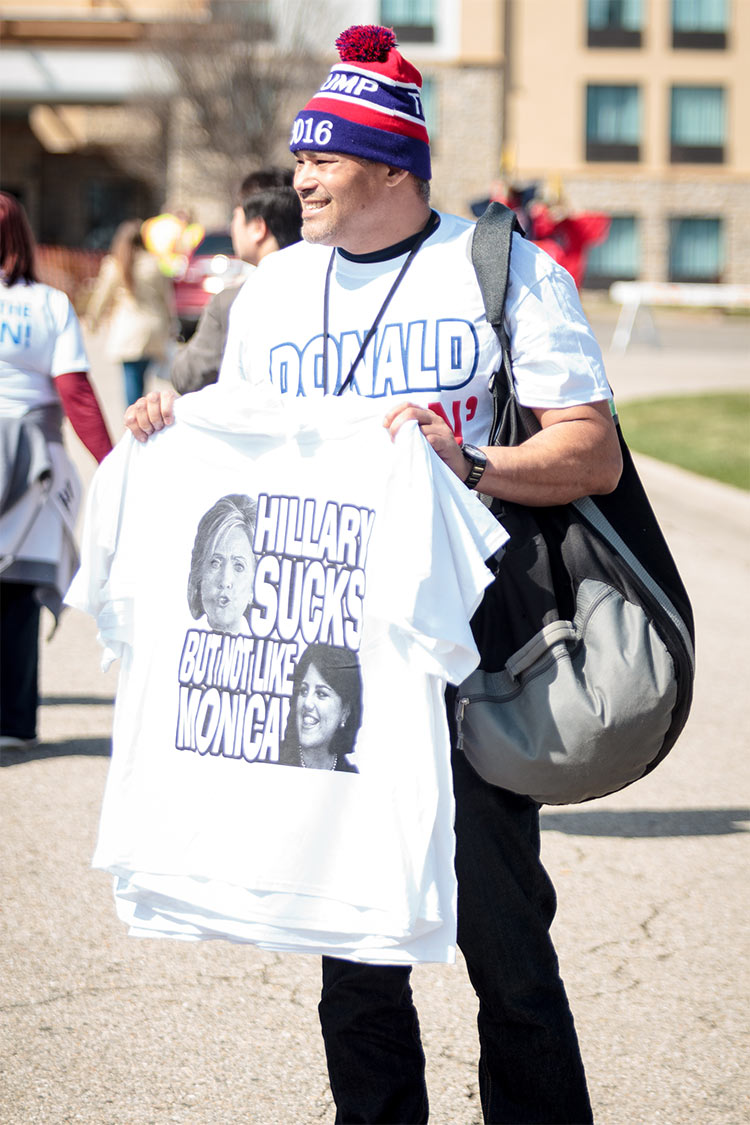 Second to pro-Trump apparel was anti-Clinton merch. This guy stood on the curb the entire day, hawking shirts by shouting their two-sided message. “Hillary sucks…but not like Mon-ee-caaa!” he sang out repeatedly, quickly flipping the shirt around to show the message on the back. “Trump that bitch!” 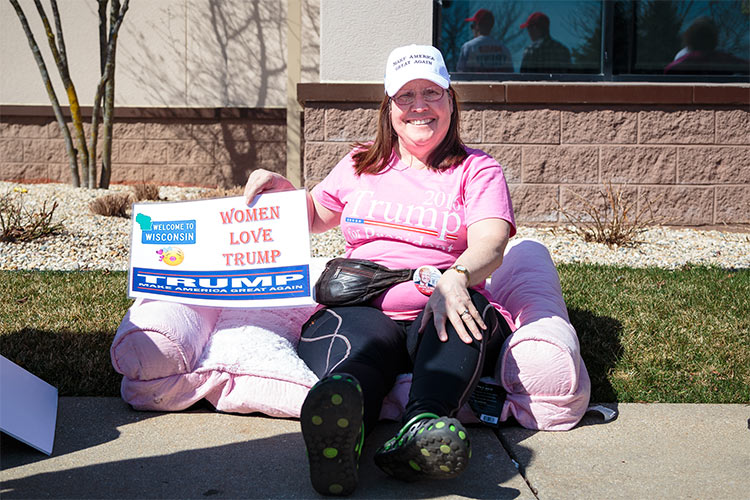 This woman was toward the front of the line, and told us she had travelled from New Lisbon the night before, staying overnight at the hotel and getting her prime spot at 8 a.m. She was there to support Trump because he “speaks from the hip and says what we’re all thinking.” She said she admired his plan to build a wall on the Mexican border, “vet Muslims coming into the country better,” overturn “radical Obamacare,” and “bring business back to the U.S. instead of letting it go overseas.” 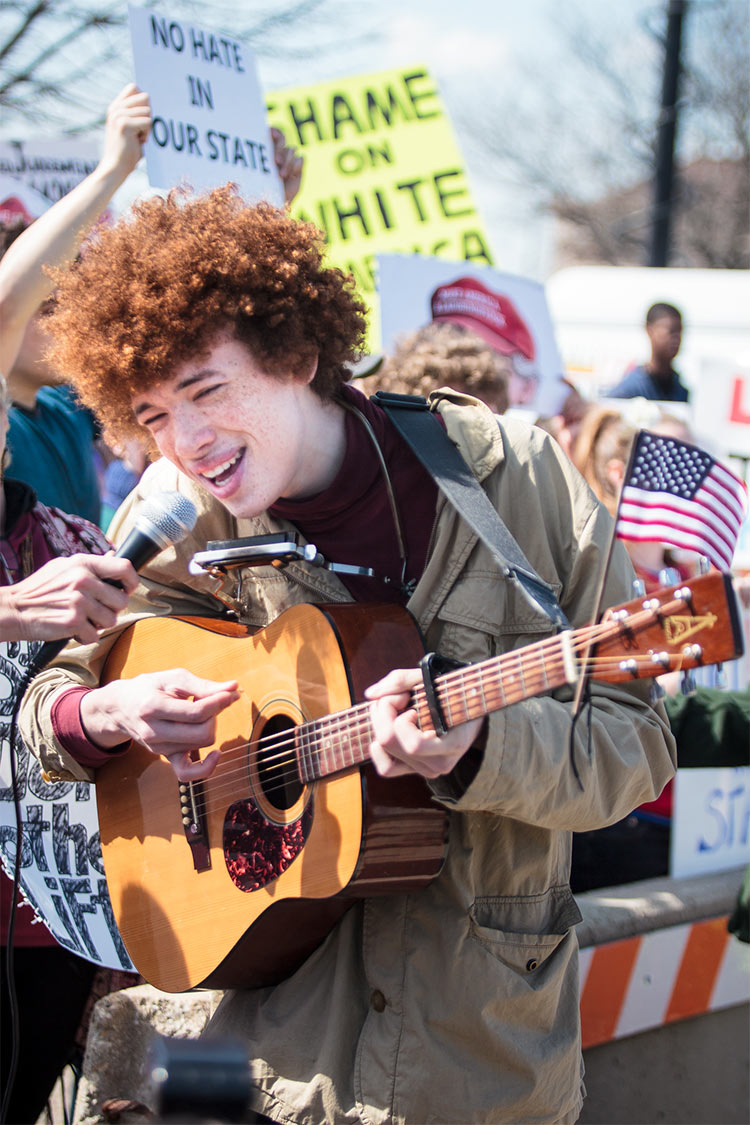 Battle of the bands: the protesters against Trump featured a young musician singing classics by Bob Dylan, Woody Guthrie, and Peter, Paul And Mary. 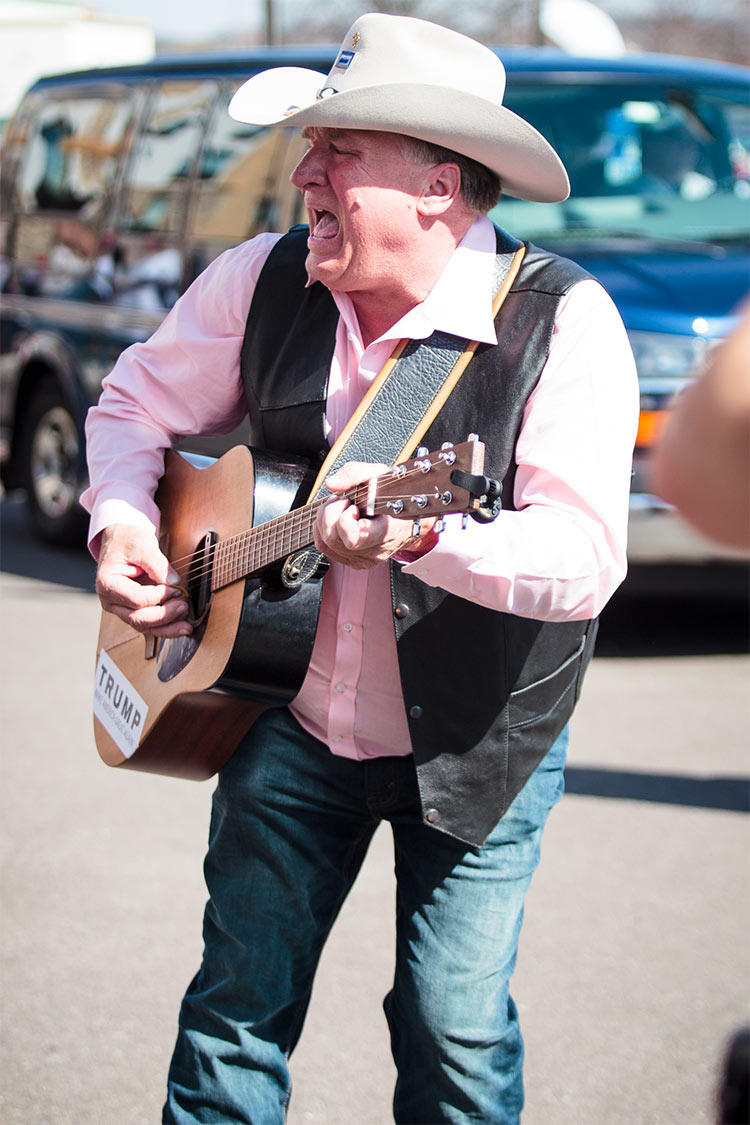 Meanwhile, this cowboy rallied Trump supporters with a honky-tonk pitch that he was “a-Stumpin’ for the Trump man / JUMP on the TRUMP train / And ride it on down the line.” 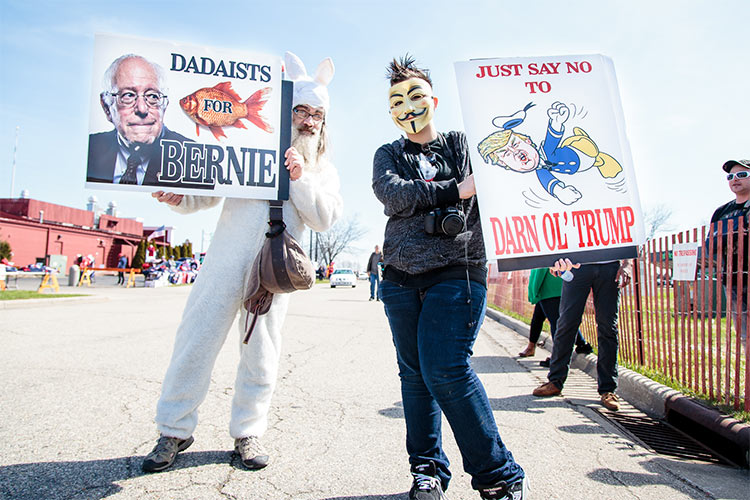 A lot of various groups you’d expect to show up on both sides did—Black Lives Matter, Veterans for Trump, etc. But who knew a representative for Dadaists for Bernie dressed as an Easter Bunny would show up? 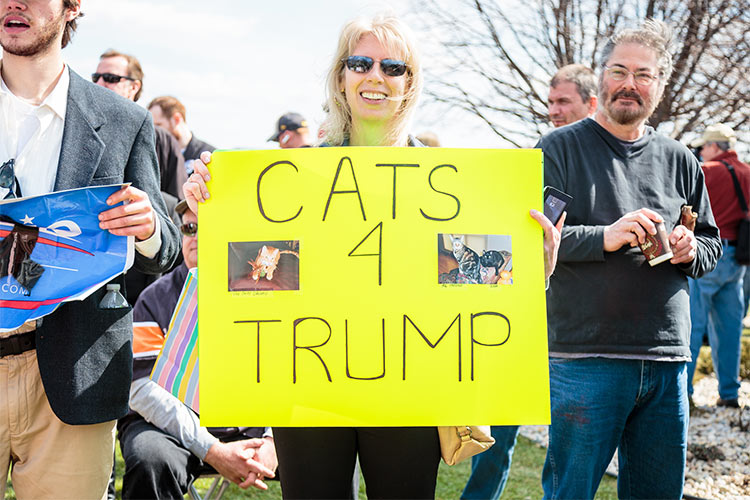 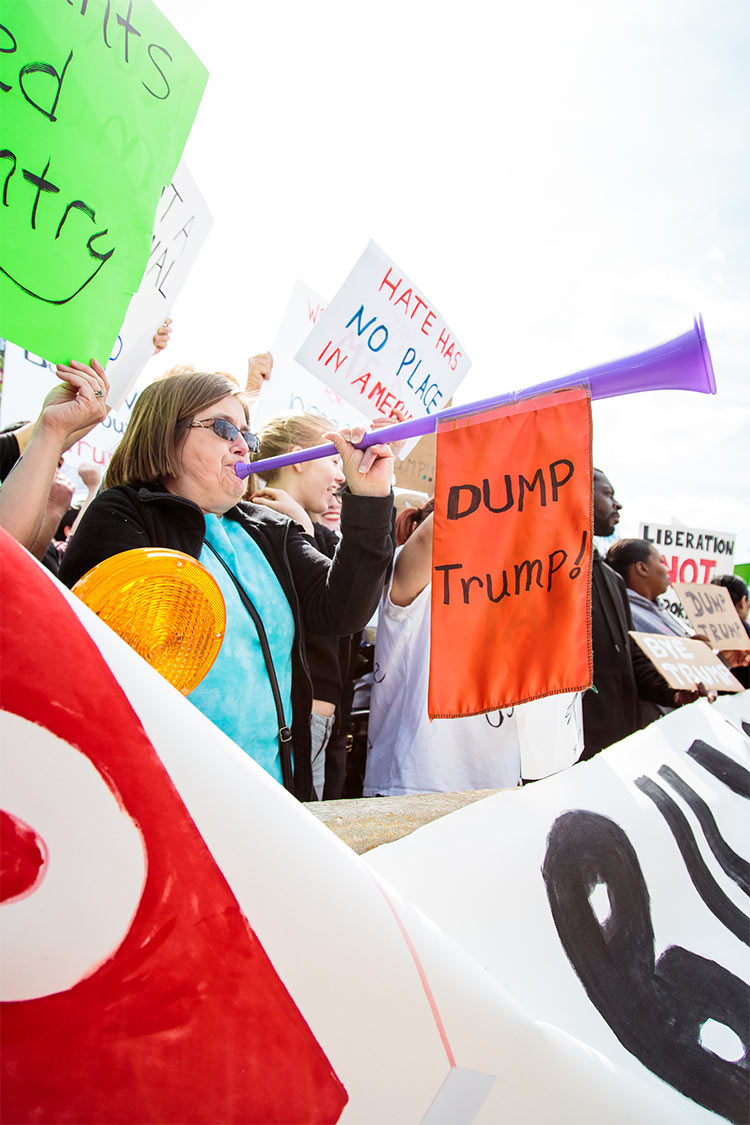 Protesters were corralled into a “Free Speech Zone,” separated from the long line of people waiting to get into the rally. Trump’s campaign has earned a reputation of violence, with Trump encouraging his supporters to aggressively eject protesters. As Trump was arriving in Wisconsin, his campaign manager was charged with simple battery for an incident earlier in the month. 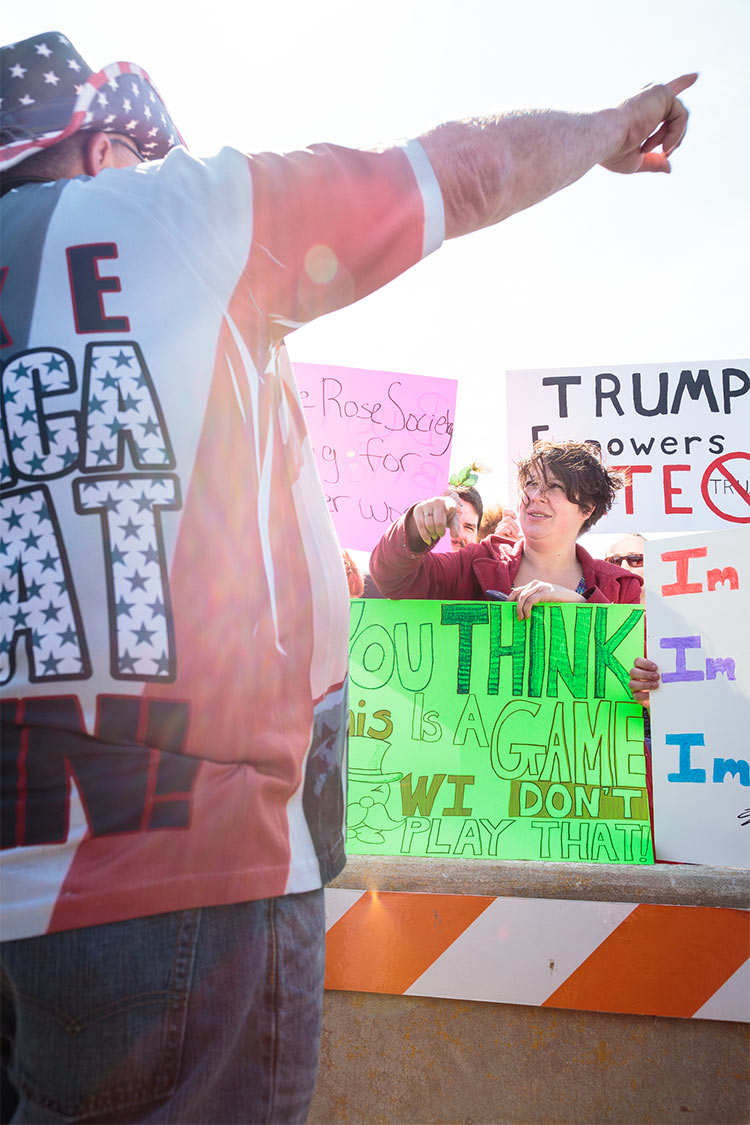 Things were peaceful most of the day, except for an occasional Trump supporter who would stop by to vent their spleen. Later in the day, though, a 15-year-old girl was apparently groped, and when she retaliated by hitting that individual, another Trump supporter shot her point blank in the face with pepper spray, according to a Milwaukee Journal Sentinel report. Janesville police are seeking both men for questioning. 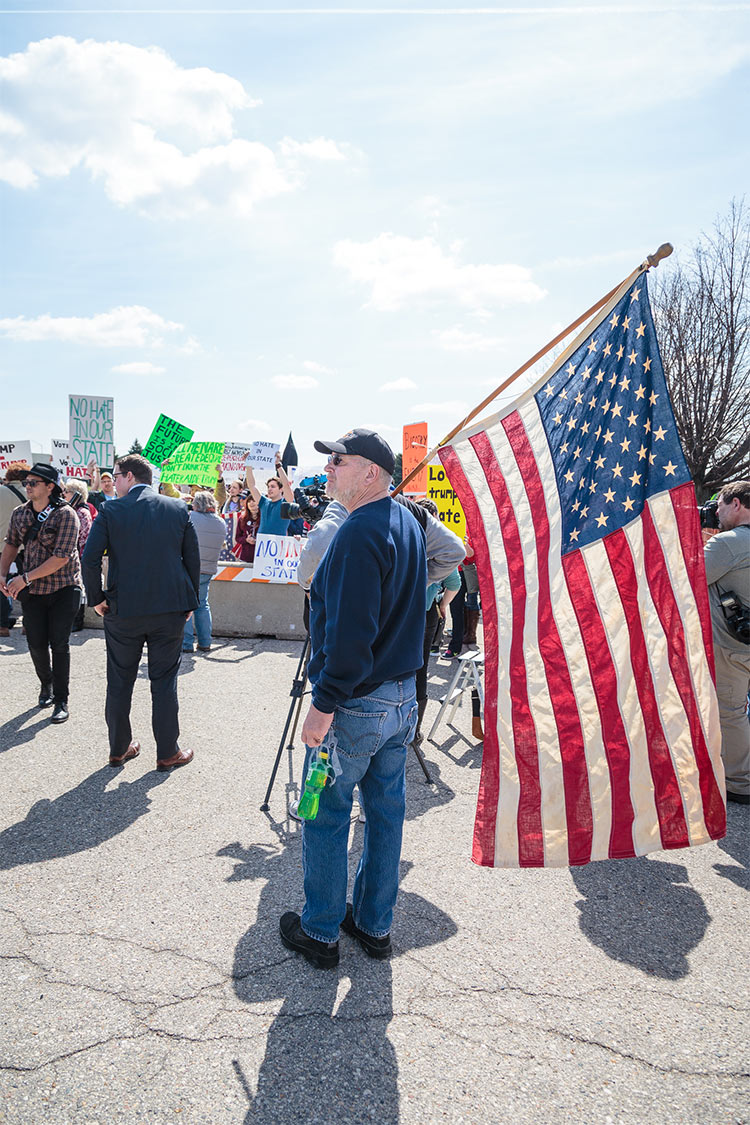 At one point, protesters and Trump supporters were converging, arguing with each other outside the concrete barrier of the protest zone. We heard one confused police officer ask another, “Is this a new line forming?” The other officer replied, “No, um…democracy in action, or something like that.”